Family coat of arms of the Melzi, Counts of Magenta

Melzi is an Italian noble family that has flourished to this day and belongs to the high nobility along with the line of the Dukes of Lodi .

The Melzi family is a noble family from Milan, first mentioned in the 14th century and who have owned property in Pontirolo Nuovo and Vaprio d'Adda since the 15th century , where Giovanni Melzi built a castle in 1482. In 1468 the Melzi count palatine by diploma of Emperor Friedrich III. and in 1588 they were accepted into the patriciate of the city of Rome. They had owned Magenta since the 17th century , which is why they have been using the title Count of Magenta since 1619 . Villa Melzi in Magenta remained the main residence from the 16th to 18th centuries. In 1650 they acquired the rule of Mozzanica and in 1676 were given the title Marchese di Torricella . In 1683 they were accepted into the nobility of imperial Italy .

Gerolamo Melzi hosted Leonardo da Vinci in his villa in Vaprio d'Adda from 1511 to 1513 , who was working for the Milanese court during this time. His plans for a reconstruction of the villa were never realized, but a Madonna fresco in the villa is partially attributed to him. After Leonardo's death, his assistant and heir, Gerolamo's son Francesco Melzi , put together a collection of writings that circulated in various academic circles in Italy under the name Trattato della Pittura . Melzi used eighteen Leonardo's notebooks as a source. He also owned numerous mechanical apparatus and drawings by Leonardo, the latter of which are now kept in the Biblioteca Ambrosiana and in the Royal Collection at Windsor Castle. The Villa Melzi in Vaprio d'Adda was given its current appearance at the end of the 16th century and is still inhabited by the Melzi family.

Gaspare Melzi married the Spanish noblewoman Maria Teresa d'Eryl in the second half of the 18th century, then took the name Melzi d'Eril and was named Spanish Grand First Class in 1750, as well as Count of Eril, Margrave of Fonte Sacrata, Baron de Orcan and Lord de Colsedilla . 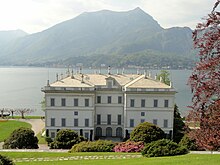 Francesco Melzi d'Eril , Vice-President of the Italian Republic founded by Napoleon (1802-1805), then Grand Chancellor of the Napoleonic Kingdom of Italy , was a personal friend of Napoleon Bonaparte and received the hereditary title Duke of Lodi in 1807 in memory of the Battle of Lodi in 1796. He acquired lands in Correzzola and the rule of Bellagio , where he had the Villa Melzi built in 1808–1810 , which is located in the middle of a garden directly on Lake Como . The duke died in 1816 without children and his titles were passed on to his nephew and adopted son Giovanni Francesco Melzi. The Napoleonic title Duke of Lodi was stripped of this after the Congress of Vienna by the new Austrian rule and replaced by the title Duca Melzi d'Eril in 1818 , but his son Lodovico (1859-1886) took the title Duca di Lodi again in 1859 and his Descendants received it in 1890, 1913 and 1939 from the new Kingdom of Italy (1861-1946) confirmed. The Villa Melzi in Bellagio passed through Maria Luisa Melzi d'Eril to her son Tommaso Gallarati Scotti , Principe di Molfetta (1878–1966), whose descendants from the Princely House of Gallarati Scotti it still belongs to.

Dukes of Lodi and Counts of Magenta

Coat of arms of the Melzi as the dukes of Lodi