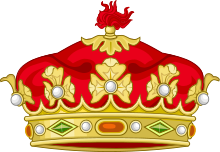 Heraldic crown of a grandee

Grandees (span. Grandes ) was in the Kingdom of Castile since the 13th century title of highest nobility , which in addition to the relatives of the royal house all outstanding by ancestors and wealth people in Aragon ricohombres called concept in itself.

In possession of certain royal fiefs , they were obliged to serve the king in the war and to provide a proportionate number of lances . In addition, they had hereditary dignity, were free of taxes, were not allowed to appear before any court of law without a special order from the king, and in certain cases could even evade their feudal obligations to the king and serve other princes, even against the king.

In addition to being entitled to the highest office of state, they had the right to cover their heads in the presence of the king, were addressed by the king as Mi primo ("my cousin"), and had with the Cortes , which initially consisted only of them and the bishops , their place immediately behind the prelates and in front of the titulados and enjoyed other similar external decorations, such as B. the foot kiss. Under Isabella and Ferdinand the Catholic , the power of this high feudal nobility was broken by Jimenes , and Charles V converted him into a court nobility dependent on the crown .

Since then, the grandees have been divided into three classes:

The grandees carried the title of excellence. During the brief reign of Joseph Napoleon , the grandeur was abolished, but restored after the Restoration without any significant privileges being attached to it. The Estatuto real of April 10, 1834 gave the grandees first place in the Chamber of Proceres or Pairs, which they retained until all rights and titles of the grandees were revoked again at the time of the Republic. King Alfonso restored the grandeur.

With the republican constitutions of 1873 and 1931 , the grandeur was abolished and reintroduced under Francisco Franco in 1948 . In today's Kingdom of Spain there are 404 titles that are linked to grandeur. Since many of these titles are in the hands of a few people (e.g. the 18th Duquesa de Alba led a total of 50 titles), there are no 404 grandees. Currently (December 2019) Princess Victoria von Hohenlohe-Langenburg , 20th Duchess of Medinaceli etc., not only holds the most titles of nobility in the world with 43 nobility titles, but also the highest number of grande dignities with 10 grandezas , even before today's Duke of Alba .

The group of country noble officers in the New Model Army at the time of the English Civil War was informally grandees (as Grandees ), respectively. They were the opponents of the Levellers .