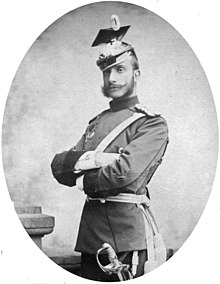 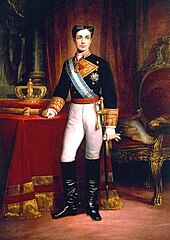 Alfonso XII was born in Madrid in 1857 as the fourth of nine children of Queen Isabella II of Spain . His father is officially her husband and cousin Francisco de Asís de Borbón . There are, however, doubts about fatherhood, since Francisco was sickly and was described partly as unable to conceive, partly as homosexual; As a biological father, Enrique Puigmoltó y Mayans, a captain of the life guards, is sometimes suspected, which the Carlist used as a propaganda weapon, as well as the alleged illegitimacy of Francisco de Asís' father Francisco de Paula de Borbón , who is also said to have come from an infidelity.

As a result of the September Revolution of 1868 , Alfons went into exile with his parents in Paris at the age of ten. On June 25, 1870, his mother abdicated in his favor. In Paris he attended the Stanislas College . After the battle of Sedan on September 1, 1870 and the invasion of German troops in Paris, the royal family fled to Switzerland and temporarily settled in Geneva . From there Alfons went to Vienna to attend the public high school of the Theresian Academy Foundation . He stayed there for three years. He did not take part in official events or in the life of the imperial court. In the summer of 1874, Alfons entered the Sandhurst British Military Academy . He was the first heir to the Spanish throne to receive systematic training abroad and in public training institutions. His training was particularly encouraged by the former minister and later prime minister Antonio Cánovas del Castillo , who campaigned for Alfonso in October 1870 when a new king was elected. In this election Alfons had received two of the 334 votes.

The "Sandhurst Manifesto" is the first public statement by the later king. In this manifesto, which was published as thanks for the congratulations on his 17th birthday and was probably largely influenced by Antonio Cánovas del Castillo, Alfons confirmed that after accepting the crown he would behave as a good Catholic, but also a liberal monarch will be. Canova's goal was to restore the monarchy by a resolution of the Cortes and to have Alfons appointed king by a request from the Cortes. This approach was preceded in December 1874 by a pronunciamiento by General Arsenio Martínez-Campos , who spoke out in favor of the re-establishment of the monarchy and Alfonso as king.

Martínez-Campos proclaimed Alfonso king in Sagunt, near Valencia . The pronunciamiento met with sufficient approval. This prompted the almost dictatorial President of the Republic Francisco Serrano Domínguez , who had been ruling almost a year ago , to hand over government power to Antonio Cánovas del Castillo, who was proposed by Martínez-Campos. Alfons arrived in Madrid on January 14, 1875. Five days later he officially took over the helm of the army (he was 17 years old and had no practical military experience or knowledge of the capabilities of the Spanish army beyond his training at Sandhurst) to fight his cousin, who claimed the Spanish crown under the name of Charles VII , as part of the 3rd Carlist War. Alfons personally took part in the last acts of war in 1876. In March 1876 he returned to Madrid victorious; Don Carlos (Charles VII), defeated, went into exile in France.

The end of the Carlist Wars was the first significant achievement of the new monarchy. In January 1876 the constituent Cortes were elected according to the regulations of 1869 . Antonio Cánovas del Castillo, who de facto exercised the office of Prime Minister from the end of December 1874 and was officially appointed to this office by Alfons, presented the Cortes with a draft constitution that was passed by the Cortes in June 1876. In February 1878 the Treaty of Zanjón came into force, through which at least a break in the armed conflict in Cuba was achieved.

A trip he undertook in 1883 through the states of Central Europe was of great value for the reputation of the king among the Spanish population. In the dispute with the German Empire over the Caroline Islands in 1885, King Alfons used his personal relationships with Emperor Wilhelm I to find a peaceful solution. The dispute was at the suggestion of Bismarck by an arbitration ruling by Pope Leo XIII. attached.

The "restoration system" that was established in Spain during the reign of King Alfonso was based on the participation of all political branches in power with the exception of the Carlist and the Republicans. A peaceful change (turno de los partidos) in the exercise of power between the conservatives and the liberals was achieved through collusion between the parties and systematic election fraud .

King Alfonso XII died on November 25, 1885. in the Pardo Palace from tuberculosis and was buried in the Pantheon of the Kings of the Monastery of El Escorial . His wife Maria Christina of Austria took over the reign. His son Alfonso XIII. was born on May 17, 1886.

On January 23, 1878 he married Maria de las Mercedes d'Orléans-Montpensier , daughter of the Duke of Montpensier and Maria Luisa of Spain . She died of typhus on June 26, 1878 , after which Alfons married the Archduchess Maria Christina of Austria , a cousin of the Emperor of Austria , on November 29, 1879 . They had three children together:

The problem of ancestral loss , which the genealogical table shows, exists with Alfonso XII. possibly only in theory, insofar as it is discussed whether Francisco de Asís de Borbón was the father of Alfons at all. However, a significant loss of ancestry is also evident on the mother's side alone: ​​via his sons Charles IV and Ferdinand I, for example, the couple Charles III. von Spain and his wife Maria Amalia von Sachsen present three times in the ancestor list of Alfons' mother within the first generation.