Sagunt (official name in Valencian , until 1877 Morvedre ; Spanish Sagunto , until 1877 Murviedro ; Latin Saguntum , Phoenician Zakantha ) is an old town in the fertile Camp de Morvedre district in the province of Valencia in eastern Spain , a hilly place 35 kilometers north of Valencia , near the Mediterranean coast . The municipality of Sagunto had 66,140 inhabitants on January 1, 2019.

Its Iberian settlers, known as Edetani , walled their place in the 5th century BC. Chr .; a number of Cyclopean limestone disks from the earlier Temple of Diana have survived on the Church of Santa Maria, but the settlement is much older. The place traded with Greek and Phoenician coastal colonies and, under their influence, minted its own coins. Because of the similarity of names, an irresistible foundation was invented by Greeks, especially from Zakynthos , in ancient times . Pliny went so far as to date the founding two hundred years before the fall of Troy . Around 219 BC Sagunto was a large and prosperous city that allied itself with the Greek colonists and Rome against Carthage and attracted Hannibal's first attack, the beginning of the Second Punic War . After the treaty for the division of spheres of interest ( Ebro Treaty ) concluded between Rome and Carthage in the run-up to the war , Sagunto fell into the Carthaginian sphere of interest and the Carthaginians believed that they had the right to conquer Sagunto. Their resistance, reported by Livy , is a brief ray of historical glory for the city. After the months-long siege of Saguntum , Hannibal conquered in 218 BC. The city and moved on to Italy. Latin texts about the fall of Sagunto are very common. 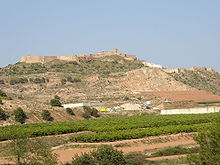 Hispania was not gently pacified and romanized, as the Iberian career of Sertorius shows. Sagunto minted coins under his rule and continued to do so when it was rebuilt by the Romans to the rank of municipium and was approaching a new prosperity. This wealth lasted most of the time of the Roman Empire and is through inscriptions and ruins (for example a theater that was destroyed by Napoleon I Marshal Suchet , who did the same with the Roman Hercules Tower). With the Arian Visigoth kings , Sagunto received its city saint, a bishop named Sacerdos ("priest"), who died peacefully and of natural reasons around 560. In the early 8th century, as part of the Caliphate of Cordoba , the city unfolded a new splendor with baths, palaces, mosques and schools for its cosmopolitan population. The city was called Molvedre in Catalan, Morviedro in Spanish , both after the Latin muri veteres , old walls. Sagunt's decline began with the rise of Valencia. In 1098 it was briefly occupied by El Cid , but the final reconquest had to wait until 1238, until King James I of Aragón .

During the Napoleonic Wars on the Iberian Peninsula on October 25, 1811, in the Battle of Sagunto (Murviedro), the French under Louis-Gabriel Suchet defeated a Spanish army under General Joaquín Blake y Joyes . It was supposed to relieve the fortress that had been besieged for months . The next day Murviedro surrendered to Suchet.

Sagunto was badly damaged in wars, but has retained much of Valencia's Gothic style . In the late 19th century the steel industry grew here in the modern city, which now stretches across the coastal plain below the picturesque ramparts of its citadel, the muri veteres , which includes a Roman forum and rebuilt theater , Moorish and medieval remains and a national monument represent. The Sagunto Theater became Spain's first official national monument in 1896.

Municipalities in the Province of Valencia