The title of this article is ambiguous. See also Strabo .

Strabon ( Greek Στράβων Strábōn , German 'the cross- eyed ' , Latin Strabo ; * about 63 BC in Amaseia in Pontos ; † after 23 AD) was an ancient Greek historian and geographer .

Little is known about Strabon's life, which fell during the transition from Hellenism to Imperial times . His family lived in Amaseia , which after the defeat of Mithridates VI. first against Lucullus and later against Pompey (and the subsequent suicide of Mithridates) as the capital of the regions in Asia Minor that had been newly incorporated into the Roman Empire as the province of Bithynia et Pontus .

Strabo himself reports that he studied with a certain Aristodemus, the private tutor of the children of a Roman named Pompey, in Caria . He then went to Rome at the age of 18 (around 45 BC) and continued his studies under the geographer Tyrannion. 25 or 24 BC He traveled to Egypt in the wake of the new Roman prefect Aelius Gallus and went on a trip to the Nile with him.

After numerous other trips he returned to Amaseia, where he wrote the extensive historical notes ( Ἱστορικὰ Ὑπομνήματα Historiká Hypomnếmata , 43 books), which were intended as a continuation of the work of Polybios and which have only survived in a few fragments. He then wrote a 17-volume geography ( Γεωγραφικά Geôgraphiká ) designed as a supplement to the historical work , which, apart from a few missing parts of Book VII, has survived in full. It was his declared aim to create a work that was easy to understand and pleasantly readable for the broadest possible, educated readership, but was nonetheless informative and should provide geographical, ethnographic and historical information. 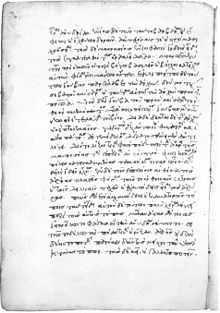 In this his work, Strabo takes the view that Greece's wealth is at least partially due to its favorable maritime location, and outlines a correlation between the civilizational progress of a society and its access to the sea. At the same time, however, he states that the geographical situation alone is by no means sufficient to explain the historical size of a people, and emphasizes that, for example, the Greek civilization is based on the Hellenes' interest in art and politics.

Since he also uses various earlier texts (some from several centuries) for his work and has in-depth knowledge of the Roman legal systems in various cities and areas, Strabo is also a valuable source for the beginning and course of the gradual Romanization of Gaul and the Iberian Peninsula. In Books III and IV in particular, he reports on the emergence of a new culture of life in these areas as a result of the acculturation of individual social classes. The work is also an important source for the history of Greece in the late Hellenistic period.

Strabon also describes the classic seven wonders of the world and provides, among other things, a description of Babylon .

During the Roman Empire , Strabon's work remained relatively unknown; he was only rediscovered and increasingly cited from the 5th century onwards, but from around this point Strabo developed into the prototype of the geographer in European intellectual life. In the 15th century, the Italian scholar Guarino Veronese translated the entire surviving work of Strabons, which contributed to the increasing importance of Strabons, later researchers such as Wilamowitz discovered their preference for the literary qualities of the work. It was said of Strabo at the time that he described some places that he had not visited better than Pausanias , who had been there himself.

With his geography, Strabo wrote one of today's most historically significant works that have been preserved from the turn of the century. Through his travels to many of the countries and areas ruled by the Roman Empire at that time , he provides today's historians with valuable information about places, people and cultures of his time. As a distinguished Greek who studied in Rome, he claims to have processed the most important books available of his time and numerous reports from contemporaries (including Demetrios von Kallatis and Theophanes von Mytilene , as the fragments from his historical work suggest). He emphasized on several occasions that the information could be subjective, out of date or even made up, and tried to dispel doubts and to mark things that seemed contradictory to him. It is not least this critical attitude, which is more characteristic of ancient historiography, that makes his work significant as a source.

A first Latin translation of geography appeared around 1469, the editio princeps of the Greek text in Venice in 1516. The critical edition by Isaac Casaubon , the page number of which is still used in references today, appeared in 1587.

After the major critical editions by Gustav Kramer (1844-1852) and August Meineke (1852-1853), Stefan Radt started a ten-volume edition of Strabons. This edition offers a new text including an extensive testimony and critical apparatus, plus a translation (volumes 1–4) and a text-critical-philological commentary (in volumes 5–8), as well as an edition of the medieval Strabo epitome and chrestomathy ( Volume 9) and a register (Volume 10).

The lunar crater Strabo and the asteroid (4876) Strabo are named after him.