The first complete list of the known "seven wonders of the world" can be found in an epigram by the writer Antipater of Sidon (2nd century BC), who wrote a travel guide for the Mediterranean and the Middle East . The Greeks called them: τὰ ἑπτὰ θεάματα τῆς οἰκουμένης [γῆς] , tà heptà theámata tēs oikoumenēs [gēs] - "the seven sights of the inhabited [earth]". Philo of Byzantium described them in De septem mundi miraculis .

It is obvious that the list was created in the Middle East: four of the wonders of the world were found there. Since many imposing buildings were being built and built at that time, those in the vicinity of the scribe were mainly listed.

This list has been changed many times over the years and adapted to the travel habits of the respective companies. Already in classical times there were alternatives such as the Capitol in Rome , the "Horned Altar of Artemis on Delos ", the " Hadrianus Temple of Zeus in Kyzikos " (southern Marmara Sea ) and many more. In the 13th century, the entire city of Rome , Hagia Sophia in Constantinople (now Istanbul, Turkey ) and even Noah 's Ark were recorded. From the initially short travel list, an entire travel catalog was temporarily created, which contained all important buildings such as temples or sculptures. But these disintegrated over time and the myth of the original wonders of the world remained in the memory .

In antiquity, the aforementioned Antipater described the list of the classic seven wonders of the world in his travel guide that is common today. The most imposing and splendid buildings of his time and his culture were named :

The list includes seven wonders of the world because the number seven was considered "perfect" in ancient times. This fixed number should increase the importance of the structures.

Today only the pyramids of Giza exist of these world wonders. The others were destroyed by earthquakes, wars, or vandalism, or fell apart over time. The originally listed city ​​walls of Babylon were z. B. already removed from the list by Antipater, as they were destroyed, and replaced by the lighthouse of Alexandria. The walls of Babylon were still partially recorded in later lists. It was not until Gregory of Tours that they finally struck off the list in the 6th century.

There are very few ancient depictions of the wonders of the world, but some coins were found with the head of Helios (the Colossus of Rhodes was a statue of the sun god Helios), with the statue of Zeus in profile or with the lighthouse of Alexandria. Descriptions of the mausoleum are available. In the Renaissance period , artists such as the Dutchman Maerten van Heemskerck and in the Baroque period the Austrian architect Johann Bernhard Fischer von Erlach made representations of the miracles according to their ideas.

Other "wonders of the world" 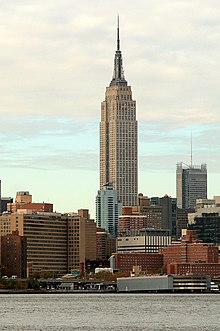 In the recent past, more modern buildings have also been designated as “wonders of the world”, which stand out from others due to their high level of architecture or their extraordinary appearance. This list is not based on records, but on architectural feats that have prevailed over time. In 1995 the American Society of Civil Engineers compiled a list of the "Seven Wonders of the Modern World":

"The new seven wonders of the world"

The “NewOpenWorld Foundation”, founded in 1998 by the Swiss Bernard Weber , with the election of the so-called “New 7 Wonders of the World” , achieved a greater media coverage in the mid-2000s . According to Weber, the aim was to connect people from all over the world through their common cultural heritage. The choice was made in a combination of online voting and jury decision in three phases.

In the first phase, there were 200 structures to choose from, on which, according to the organizers, around 20 million Internet users voted. In the second phase, a jury consisting of seven architects (including Zaha Hadid , Tadao Andō , César Pelli and Harry Seidler ) chaired by former UNESCO Director General Federico Mayor Zaragoza selected 21 finalists from the 77 top winners .

Protest came from Egypt: Minister of Culture Farouk Hosny and the Secretary General of the Egyptian Antiquities Administration, Zahi Hawass , stated that the election had no scientific or official background and described it as "nonsense". Thereupon the pyramids of Giza were removed from the list and declared as an "eternal wonder of the world". In the third phase from January 2006 to June 2007, voting was possible via the Internet, telephone or SMS. According to the organizers, a total of 100 million votes were cast. Neuschwanstein Castle barely missed making it onto the list and was voted 8th.

On July 7, 2007, the "New 7 Wonders of the World" were announced in Lisbon as part of a lavishly staged television show:

The new wonder of the world Machu Picchu (2018)

The election conditions triggered critical reactions. The survey was criticized as being “decidedly unscientific”. In several countries there have been campaigns by tourism ministries, politicians or business people to call people to vote for a certain building. They were expressly encouraged to cast multiple votes. Prominent figures in public life advertised their candidates in many countries.

Another point of criticism was that participation was only possible online or by phone. In principle, everyone could take part in the voting process, but the majority have no access to these technologies (“ digital divide ”). Weber countered that more votes were cast from Mali within a week than from Germany as a whole. It was also criticized that fees were charged for voting by telephone.

After initial support of Weber's initiative by the Office for Partnerships of the United Nations , the distanced UNESCO of the survey and found that they constituted a private media campaign that neither scientific criteria still follow science and conservation serve (as opposed to Inclusion of a building in the UNESCO World Heritage ).

Weber also earned recognition for his campaign from countries in Asia and the so-called Third World , since the seven ancient wonders of the world were exclusively in the Mediterranean and the Middle East and the “New Wonders of the World” are therefore seen as a fairer representation or selection.

Analogous to the man-made “wonders of the world”, various natural phenomena such as the Grand Canyon in the United States or the Great Barrier Reef off the coast of Australia are sometimes referred to as such. Many of them are also part of the world natural heritage .

Here, too, a global survey by the New7Wonders project (see above) was carried out. The results are as follows:

Commons : Seven Wonders of the World  - collection of pictures, videos and audio files