Schematic map of the seven hills of Rome 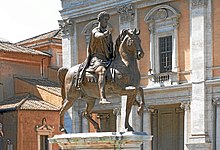 The Romans introduced the word Capitol etymologically from the place of a skull of a legendary, from Vulci originating Etruscan king Olus or Aulus Vulcentanus from ( caput Oli , "skull Olus"), who once buried on the hill, whose skull was allegedly later found there.

The modern etymological attempts to explain the name Capitolium itself are controversial. Whether the name is of Etruscan or Sabine origin cannot be clarified due to a lack of sources.

In the archaic period, i.e. before the temple of Jupiter was built, the Capitol Hill was called according to Varro mons tarpeius , named after the Tarpei rock . In the following years, the two peaks were collectively referred to as arx et Capitolium , before the more general name mons Capitolinus for the entire hill became common. Finally, the Romans also transferred the Capitolium , which was originally used exclusively for the southern summit, to the entire hill .

Coming from the Forum Romanum , one climbed the hill over the clivus Capitolinus , which was developed as a roadway and which first took its way from the Tiberius Arch on the northwest corner of the Basilica Julia around the Temple of Saturn to the depression between the crests. From there you reached the height of the Capitolium, which you entered from the southwest, over two turns with a 10% gradient.

The Capitol Hill was not originally part of the early settlement of Rome and was only opened with the use of the Roman Forum in the 6th century BC. Used and integrated. From this time on, the northern of the two hilltops housed the refuge and was therefore also known as arx (refuge / bulwark). Here stood since 344 BC The temple of the goddess Juno Moneta . Roman coinage was also associated with this temple of Juno. According to the city history of Livy , the holy geese of the Juno sanctuary saved the city in 387 BC. BC before a Gallic storm, when they noticed the nocturnal attack and woke the Romans with their chatter. According to this legend, the Capitoline geese symbolize attentive guards. More temples were added later, mainly for oriental gods. The church of Santa Maria in Aracoeli has probably taken the place of the former pagan temple since the 6th century . Near its apse was probably the Auguraculum , that small sacred area from which the Augurs read the public omens .

On the southern hill there was since the late 6th century BC. The Capitolium , the most important temple of ancient Rome, which was dedicated to the so-called Capitoline Triassic from Jupiter Optimus Maximus Capitolinus , Juno Regina and Minerva . As the sacred center of Rome and thus of the entire Roman Empire, it also gained political importance. The inauguration of the consuls was always celebrated here with a solemn sacrifice, as was the end of the triumphal procession that regularly led to the Capitol. There the triumphator sacrificed in front of the Capitolium at the altar of Jupiter Soter in order to conclude his triumphal procession.

In addition to the main sanctuary of the Capitoline Triassic, there were other temples in the sacred area called Area Capitolina on the southern hill, which was enclosed by a wall and closed at night - guarded by dogs under the guidance of a temple servant. Domitian took refuge in this servant's quarters when Vitellius's troops stormed the Capitol. Under the area there were underground chambers called favissae , which contained material from abandoned temples and buildings as well as old consecrations and gifts. In the district of the area Capitolina were the smaller sanctuaries of Fides , Jupiter Tonans, Jupiter Feretrius, Mars Ultor (before this was moved to the Augustusforum ), Venus Erycina , the temples of the Ops , the Mens and Veiovis , the was on the depression between the two crests. The aedes Tensarum , the repository of the silver and ivory floats in which statues of gods were transferred to games in the Circus Maximus , was also located near the Capitol Temple .

In addition to numerous altars for other deities, some colossal statues adorned the Capitol. Among them was the colossal statue of Jupiter, which Spurius Carvilius Maximus 293 BC. From the booty of the third Samnite war. It was so big that it could be seen from the sanctuary of Iuppiter Latiaris on Monte Cavo in the Alban Mountains . In 209 BC A colossal Heracles of Lysippus , made of bronze, from Taranto was placed here. Countless portrait statues and victory monuments, including an arch of the gens Calpurnia , were set up in the area, so that consecrations had to be cleared away, deposited under the area or moved to other locations on a regular basis.

Another important site is the Tarpeian Rock , on the southern tip of the Capitol , where death sentences were carried out by pushing the convict off the rock. In the depression between the northern and southern hills there was a grove known as the Asylum. To the east of it was the Tabularium , the state archive of the Roman Empire .

The Senator's Palace , the Roman town hall, stands today on the foundations of the Tabularium, which are still clearly visible . In the raised depression are the Capitol Square designed by Michelangelo with a copy of the equestrian statue of Mark Aurel , the Conservator's Palace and the Palazzo Nuovo (both are part of the Capitoline Museum ).

Capitol Square as we know it today no longer has anything to do with the function and the derived significance of the Capitol as a center of religious power. The square between the two hilltops is an example of a square that was designed according to modern, i.e. not according to Roman-ancient, plans. The redesign of the square and the surrounding buildings was designed by Michelangelo . The square was thus subject to a holistic design concept that marked the beginning of the city's resurgence. After the “ Sacco di Roma ” (1527), the Capitol was in ruins. Pope Paul III from the House of Farnese was embarrassed about the condition of the square on the occasion of the visit of Emperor Charles V in 1536, which is why he asked Michelangelo to redesign the piazza. Michelangelo only saw the completion of the ramp (Cordonata).

The design of the square and the renovation of the Palazzi dei Conservatori and Senatori as well as the construction of the Palazzo Nuovo were carried out according to his plans. The square as such turns away from the former center of the city, the Roman Forum, which lies behind the Senator's Palace. He turns to the new center, the Vatican. Michelangelo planned a public ballroom that glorifies antiquity and pays tribute to its formal language in the palazzi. With the construction of Palazzo Nuovo, Michelangelo created a public space that appears both open and closed. The trapezoidal complex opens on both sides of the Senator's Palace and leads over to the forum. In the paving there is a multi-rayed star, the universe, with the sun and the emperor in the middle. Michelangelo thus represented the self-image of ancient Rome: Caput mundi , head of the world, with the emperor as the central figure. The popes adopted this self-image during the Renaissance. The unique equestrian statue shows the greatest philosopher among the emperors, Mark Aurel. The luck of this unique preserved equestrian statue was a mix-up. In the Middle Ages, all of the 22 other equestrian portraits fell victim to greed for metal. This statue survived because it was mistakenly believed to be an image of the first Christian emperor Constantine. Only a copy of Mark Aurel's equestrian statue is left on the square. The pollution had damaged the original so much that it was removed in the 1980s and placed in the Capitoline Museum. Traces of the former gilding can still be seen on the original. Until the redesign of the Capitol Square, the equestrian statue stood in front of the Lateran. The pedestal with the Farnese lilies and an inscription in praise of the emperor on which the equestrian statue stands is a creation by Michelangelo, as is the staircase leading to the senator's palace. At the foot of the ramp of the Senator's Palace, he placed an ancient statue in the niche above the fountain. This sculpture once represented Minerva, who was transformed into the goddess Roma during the Renaissance. The Roma is flanked by two statues from the 2nd century AD, which symbolize the Nile (left) and the Tiber.

360 ° panorama of the Capitol Square

The term "Capitol" in the occidental world

The name "Capitol" was transferred to some buildings in the Classicism period . The most important is the Capitol in Washington, DC , seat of the US Congress . The name of the building was not based on the Roman hill, but rather on its ancient main temple, the Capitolium .

According to Theodor Heuss , the Roman Capitol, along with the Acropolis and Golgotha, is one of the hills on which Europe was founded.