The title of this article is ambiguous. Further meanings are listed under Augur (disambiguation) . 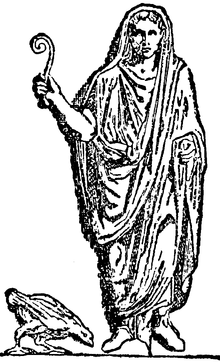 Augur with crook, illustration from the Nordisk familjebok .

Reverse of a denarius of the emperor Vespasian with the title AVGVR, the reference to the tribunician power (TRI [BUNICIA] POT [ESTAS]) of the emperor and priestly implements; minted between 71 and 73.

An augur was a Roman civil servant who had to find out whether a company planned by the state or by a pater familias (head of the family) was acceptable to the gods . He proclaimed the will of the gods, which he read during the augurium from the flight and the cry of birds and other animals ( auspices , from Latin auspicium "bird's eye view "). 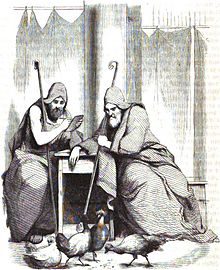 In the Roman sense, the augur is not a priest ( sacerdos ), i.e. not an official with the task of performing sacrificial ceremonies. However, the Augurat could be taken over by priests in the sense of an accumulation of offices. The sign of the augurs was a crook ( lituus ) .

The Augur used the crook to designate a square area in nature, the so-called templum , which - sometimes facing east - was used for observation. Here the augur exercised the contemplatio , that is, he paid attention to the various signa ("signs"). There were two main classes among the signa , the auguria impetrativa ("requested signs") and the auguria oblativa ("unfavorable signs"). Furthermore, there were five different types of signs, one of which is ex quadripedibus ("from the quadrupeds"), which indicates that the restriction to birds represents a narrowing of the later period.

The augurs were organized in a college of priests supposedly founded by Romulus or Numa Pompilius . Initially it consisted of three members (one for each of the original three tribes ), later the number of persons was increased to four, then to six and at the latest with the Lex Ogulnia to nine. There have been fifteen augurs since Sulla and sixteen since Caesar . During the imperial era , the rulers were given the right to appoint more officials than theoretically intended, so that the number of augurs rose again.

Originally, the priesthood was there to ask for an increase in the harvest or an increase in the welfare of the state. Later the function of the augurs was taken over by the Etruscan haruspices , the liver interpreters. But even in the Roman Empire, the title was occasionally used by individual emperors, such as Vespasian (see photo of the Roman coin).

The root word of Augur and Augurium was associated with the Latin augere ("to multiply") by some . One referred to an assumed fertility and multiplication ritual in connection with the crook. As a rule, however, it is traced back to a word form avi-gur , from which it was mostly derived even by ancient authors. While au- , following ancient explanations, can be combined with avis (“bird”) as in auspex (= avis-spex ) without any problems , the derivation of the second word component -gur fluctuated . It was explained either with garrire (“chat, chat, babble”) or with gustus (“ to taste ”), but mostly with gerere (“to behave”). The forms auger and augeratus mentioned by Priscian would fit this, which could also be taken as avi-ger . Günter Neumann led -gur as Suetonius on gustus back and linked it to the Indo-European root * geus- and meaning "examine judge". He translated augur as “bird examiner” and compared it to auspex , the “bird viewer”. Nevertheless, the interpretation of the second word component ultimately remains unclear.

Even today, augurs are commonly used in connection with statements about possible future developments . An Augur smile figuratively describes the knowing smile of an initiate who knows about the future. The expression goes back to an utterance of the older Cato handed down by Cicero , who did not refer to the augurs, but to the haruspices (entrails):

"The old saying by Catos is well known, he is surprised that a haruspex doesn't smile when he sees another haruspex."

In contrast to today's interpretation, Cicero, who was himself an augur, uses this quote ironically within his argument against the credibility of fortune tellers' possibilities. The smile is therefore based on the knowledge of an initiate who knows that he himself and other augurs with their practices cannot clearly read the future from the observed signs and that divination can also be used as a political instrument.

In contrast to today's usage, inauguratio did not mean the introduction to an office, but was a very rarely used word in the sense of the beginning.

The Italian word augurio for "congratulations" is derived from augurium ("sign").