This article is about the ancient grammarian. For other namesake see under Priscianus . 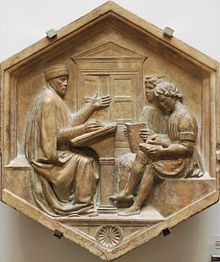 Priscian or The Grammar , half-relief (marble) from the northeast side of the bell tower of the Florentine Cathedral, Luca della Robbia , 1437/39

Priscianus Caesariensis (German Priscian ) was a late antique Byzantine Latin grammarian. He lived around 500 and died at the beginning of the reign of Emperor Justinian I (527-565) in Constantinople .

That Priscian was active in the decades around 500 is evidenced by the poem he addressed to the Eastern Roman Emperor Anastasius (491-518), as well as by the fact that the manuscripts of his Institutiones grammaticae contain a postscript that states that the work 526/527 by Flavius ​​Theodorus, a scribe in the imperial secretariat in Constantinople. At this time, Latin still played an important, albeit diminishing, role in the Eastern Roman Empire, because in the 6th century, command of Latin was still considered indispensable for exercising an occupation in administration or the army, which is why Priscian's grammar expanded very early Spread - not only in Eastern Stream, but also in the West.

Priscian's nickname Caesariensis probably indicates (after Barthold Georg Niebuhr and others) Caesarea in the province of Mauretania (northwest Africa) as the place of origin. There were, however, several cities of that name throughout the Mediterranean; Researchers like Warren T. Treadgold doubt the origin of Priscian from Mauritania and consider him to be an Eastern European. On the other hand, if the traditional and widely accepted hypothesis is correct, then Priscian was born under the rule of the Vandals who ruled this part of North Africa between 429 and 534. Priscian's teacher was a certain Theoctistus , who also wrote an Institutio artis grammaticae . Priscian dedicated three smaller treatises to the younger Symmachus , Boethius' father-in-law . Cassiodorus overwrites some excerpts from Priscian with the statement that he taught in Constantinople in his (Cassiodors) time (Keil, Gr. Lat. Vii. 207).

The beginning of the Institutiones grammaticae in the 850/851 written manuscript St. Gallen, Stiftsbibliothek, Cod. Sang. 904 (page 86)

Institutiones grammaticae . Manuscript in the Biblioteca Medicea Laurenziana , Florence (around 1290)

Priscian's work was quickly received throughout the late antique and early medieval Mediterranean region. It is even quoted by several British authors of the 8th century - Aldhelm von Sherborne , Beda Venerabilis , Alkuin - and was used by Rabanus Maurus from Fulda and Servatus Lupus from Ferrières , among others . Its importance for the maintenance of the Latin language in the Middle Ages can hardly be overestimated.

For many centuries, Priscian's grammar was considered fundamental. There is hardly a major library in Europe that does not have or had no copy of his work, of which there are around a thousand manuscripts. The greater part of it consists only of books I to XVI (sometimes called Priscianus major ); some contain (besides the three books Ad Symmachum ) only books XVII and XVIII ( Priscianus minor ); few both parts. The earliest manuscripts date from the 9th century , only a few fragments are older. All of them, however, ultimately come from the one copy that Theodorus made.

The Institutiones grammaticae are a systematic presentation of Latin grammar, dedicated to the consul and Patricius Julian, whom some researchers equate with the author of the well-known excerpt from Justinian's Novellae (part of the Codex Iuris Civilis ), but this lawyer seems to have lived some time later than Priscian to have. Perhaps, therefore, what is meant is the Julian who officiated as Justinian's praefectus praetorio Orientis around 530 and who himself dabbled as a poet. The Institutiones are divided into eighteen books, the first sixteen of which deal mainly with sound, word formation and inflection , the last two, which represent about a third to a quarter of the entire work, with syntax .

In his foreword, Priscian informs that he has taken over into Latin those basic rules of the Greeks Ailios Herodianos and Apollonios Dyskolos , which he considered appropriate, and that he added Latin grammar to them. He has handed down many fragments by older authors that would otherwise have been lost, for example by Ennius , Pacuvius , Lucius Accius , Gaius Lucilius , Cato and Marcus Terentius Varro . The authors he quotes most often, however, are mainly Virgil , then Terence , Cicero and Plautus , and finally Lucan , Horace , Juvenal , Sallust , Statius , Ovid , Livius and Persius .

His diligence in collecting forms and examples was great, and his approach was methodical. His Latin style is straightforward, he writes a clear, understandable technical language.

The shortcomings of his work can be summarized (from a modern point of view) in four main points:

Priscian often gives a rule too general or too narrowly and then looks for restrictions or extensions. His “ etymologies ” are sometimes extremely daring or absurd: for example caelebs from caelestium vitam ducens , b instead of a consonant u , because one consonant cannot precede another; deterior from the verb detero, deteris , potior (as an adjective ) from potior, potiris ; arbor of robur ; verbum from verberatus aeris etc. It is also not always correct in Greek usages. Despite these weaknesses, Priscian's performance was very remarkable.

Priscian's three short treatises dedicated to Symmachus deal with weights and measures, the metrics in Terence and some rhetorical elements (exercises translated by Hermogenes ). He also wrote De nomine, pronomine et verbo (a short version of parts of his Institutiones ) and an interesting sample of grammar teaching in schools in the form of a complete syntax analysis through question and answer on the first twelve lines of the Aeneid ( Partitiones xii. Versuum Aeneidos principalium ). The metric is discussed first, each verse is examined, and each word is examined carefully and instructively. A treatise on accentuation was previously ascribed to Priscian, but this is mostly rejected by today's scholars because of the subject and language.

Priscian also wrote two long poems, namely the already mentioned (and historically interesting) praise to Emperor Anastasius in 312 hexameters with a short iambic introduction and a verbatim translation in 1087 hexameters of Dionysios ' Periegesis , a geographical overview of the world.