The title of this article is ambiguous. For information on the members of the Vitellius family, see Vitellius (family) . 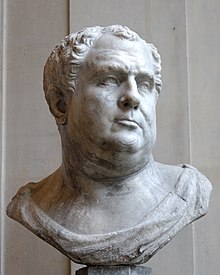 Aulus Vitellius (7 or 24 September 12 or 15 AD in Lucera - 20 or 21 December 69 in Rome ) was Roman Emperor from April 69 until his death in December of the same year . He was one of four emperors of the Four Emperors year in the throes of civil war after Nero's forced suicide on 9 June 68. The Emperor biographer Suetonius describes him as a domineering drunkard large due to its robust language prestige had at his troops.

Aulus Vitellius was the son of Lucius Vitellius ( consul 34, 43 and 47), who held influential positions at the courts of the emperors Tiberius , Caligula and Claudius , and the sextilia . Aulus thus belonged to one of the leading families of the Senate aristocracy and became consul in 48.

In his first marriage Vitellius was married to Petronia , probably a daughter of Publius Petronius , who succeeded his father Lucius Vitellius in the leadership of Syria. From this marriage came a son, Vitellius Petronianus, who was blind in one eye. The not incapable Petronia made him an inheritor on the condition that he would be released from paternal power. Vitellius therefore declared him of age, "but had him, as is believed, killed soon afterwards by accusing him of trying to kill himself and then drinking the poison himself prepared for his criminal plan out of remorse" .

Vitellius could never get over the fact that Petronia had broken up with the alcoholic with the noticeably red face after a short time. At the end of April 69 Vitellius had her second husband Gnaeus Cornelius Dolabella secretly murdered. Vitellius himself married Galeria Fundana for the second time, from whom he had a son, Vitellius Germanicus , and a daughter, Vitellia .

Under Nero he was proconsul of the province of Africa in 60/61 , then a legate there under his brother Lucius , who had succeeded him as governor. In early 62 he took part in the trial of Antistius. At the end of 68, Nero's successor Galba made him commander of the army in Lower Germany .

Vitellius took the opportunity and settled on 2 January 69 of the Germanic legions in Colonia Claudia Ara Agrippinensium (Cologne) to Emperor exclaim, with the sword Gaius Julius Caesar , which in Cologne Mars Temple was kept as a symbol of his claim to power was presented. On this occasion he also adopted the nickname Germanicus . Together with vexillations of the British legions, parts of the troops stationed on the Rhine marched to Italy. The withdrawal of important troops in the Batavian uprising of the same year was supposed to cause a very dangerous situation for the Romans in Germania.

After crossing the Alps , Vitellius's troops under his generals Fabius Valens and Aulus Caecina Alienus defeated the legions of Otho , who ruled Rome, in the First Battle of Bedriacum . Otho killed himself on April 16 when he received news of the defeat. The soldiers swore allegiance to Vitellius on April 19, shortly afterwards he presented his son of the same name as heir to the throne in Lugdunum . Vitellius marched without resistance with his legions to Rome, where the Senate accepted him as emperor.

In Rome, Vitellius endeavored to take advantage of the attachment to Nero that still existed in parts of the population and the guard by holding a large funeral service for the slain emperor and also having his compositions performed in public.

There was, however, fierce resistance to his assumption of power, especially among those border armies that, unlike the Rhine Army, had not been involved in Vitellius' uprising and now felt they were disadvantaged. In the middle of 69 Titus Flavius ​​Vespasianus , who was in Judea with his legions, was proclaimed emperor by them after he had come to an understanding with several important military leaders. Vespasian enjoyed some sympathy in the army, so that a force of five legions could quickly be set up against Vitellius, which was mainly provided by the Danube army. In the Second Battle of Bedriacum on October 24, 69 Vitellius' troops were decisively defeated while Vespasian was still in the east.

Then there was fierce fighting in Rome. Vitellius, who had meanwhile announced that he wanted to give up the empire, but had been urged to continue the resistance, was finally picked up on December 20 or 21, 69 by the Flavian troops, which took Rome under the leadership of Mark Antony Primus . According to Suetonius , he is said to have hidden in the porter's chamber of the imperial palace, the door of which he bolted and a dog tied on the outside. Cassius Dio even reports that he is said to have hidden in a dog kennel. It was shown publicly on the Gemonian Staircase , tortured to death, dragged through Rome on a hook and thrown into the Tiber . Many of his followers also died.