This article deals with the Roman emperor. For other people, see Otho (disambiguation) . 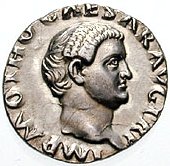 Portrait of Othos on a contemporary coin

Marcus Salvius Otho (born April 28, 32 in Ferentium ; † April 16, 69 in Brixellum ) was Roman Emperor from January 15, 69 until his death three months later . He was one of the four emperors of the four-emperor year .

The Othos family came from the South Etruscan holiday. His grandfather, Marcus Salvius Otho, was originally a knight and was the first of the family to be admitted to the Senate . By promoting the Livia he was 8 BC. BC mint master and later praetor . His son, Otho's father, Lucius Salvius Otho , became a suffect consul under Caligula and Claudius, governor of the provinces of Africa and Dalmatia. He belonged to the Arval Brothers and was elevated to the patrician rank by Claudius . He was married to Albia Terentia, who came from a knightly family. 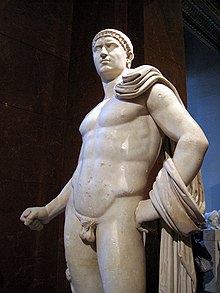 Statue of Emperor Otho in the Louvre (Paris).

During his youth, Otho lived a lavish and frivolous lifestyle, much to his father's displeasure. Through Nero's temporary lover Acte , he came into the circle of the young emperor in the mid-1950s. In 58, Otho married the beautiful Poppaea Sabina , allegedly at Nero's instigation, who wanted to win her as a lover, but perhaps also out of love. In any case, Nero soon saw him as a rival for Poppaea's favor and, although Otho had first held the bursary , sent him to Lusitania as governor in 59 in order to be able to marry Poppaea himself.

Otho is said to have managed his province well, in which he stayed for ten years. When Servius Sulpicius Galba , the governor of the neighboring province of Hispania Tarraconensis , rose against Nero, Otho supported him and went to Rome with Galba. He hoped to be adopted by the new emperor and thereby determined as his successor. However, Galba opted for Lucius Calpurnius Piso Frugi Licinianus as his successor. The resigned Otho instigated the Praetorian Guard on January 15, 69 to kill Galba and Piso and to proclaim him emperor himself. The Senate reluctantly recognized Otho as emperor.

To everyone's surprise, Otho ruled with astonishing skill during his brief tenure. His position, however, was not unchallenged from the start, because roughly at the same time as Otho's coup d'état, the Lower Germanic governor Aulus Vitellius rose to become emperor, supported by the legions in Germania inferior and superior and Britain . The provinces in the east, however, took an oath on Otho as emperor.

Otho tried to build on Nero's rule (he even used Nero's name for a time and abolished the damnatio memoriae ). He relied primarily on the Praetorians and former followers of Nero, who were reinstated in offices, except for the former Praetorian prefect Tigellinus , whom Otho had executed for betraying Nero.

Attempts by Othos to end the rising of Vitellius through negotiations failed. Vitellius was not satisfied with the offered role of co-regent and set his troops on the march to Italy. For defense, Otho had to fall back on an inhomogeneous armed force consisting of the Praetorians, 2,000 gladiators and a legion made up of naval soldiers ( I Adiutrix ), to which hastily summoned legions from the Danube provinces came. She confronted Vitellius's troops in northern Italy, where Otho set up his headquarters in Brixellum . His troops were initially successful in three smaller battles, at the foot of the Alps , at Placentia and near Cremona at a place called ad Castores .

On April 14, 69, Otho's army was defeated in the (first) battle of Bedriacum (near Cremona ). When Otho found out about it the next day in Brixellum, he stabbed himself in his tent the next morning, hoping to prevent further bloodshed, even though those around him did not consider the defeat to be decisive and wanted to continue fighting. His body was cremated and his ashes were buried in a simple tomb. Aulus Vitellius was officially recognized as his successor by the Senate.

Tacitus suggests that Otho only pretended to be at the beginning of the rule:

“Contrary to all expectations, Otho did not indulge in dull debauchery, put all personal joys aside, hid his slovenliness and changed his life in accordance with the imperial position; all the greater fear aroused these advanced virtues and the expected return of vices. "

The circumstances of Otho's death in particular earned him great admiration from posterity. The biographer Suetonius , whose father stayed as a military tribune in the vicinity of Otho, reports that Otho repeatedly emphasized his disgust for the civil war. Martial wrote an epigram on the suicide, which was not stingy with the highest praise and even placed Otho above Cato Uticensis , the hero of the outgoing republic:

“When the civil war raged in a draw and the softish Otho could still have won, he spared his fatherland too much bloodshed and pierced his heart with a firm hand. Caesar has to give Cato priority, but both catch their breath because in his death Otho towers over them both. "

The most important sources for the life and dominion of Otho are: