Damnatio memoriae of the Emperor Commodus on an inscription in the Römermuseum Osterburken . After the name was first chiseled out, it was later inserted again, but only with color.

Damnatio memoriae ( Latin for "damnation of remembrance") means the cursing and demonstrative eradication of the memory of a person by posterity. The term primarily refers to actions in the Roman Empire , but is itself a modern creation. In ancient times one spoke of the abolitio nominis . 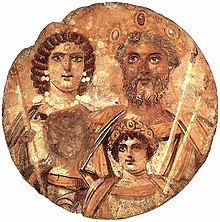 The names of particularly despised and hated people were erased from all annals , all accessible portraits and inscriptions were destroyed, and in the future it was avoided as far as possible to mention the convicted person publicly - although mentioning his name was never a punishable offense.

Modern research usually assesses the meaning of the damnatio memoriae , especially in Rome, differently today than it used to be: The measures should therefore by no means lead to the person concerned being forgotten, rather the memory of him was deliberately kept alive by cursing his name - not by chance almost everyone who fell for the damnatio in Rome is known by name. Often it can even be shown that the deletion of the names and pictures of those affected remained intentionally imperfect: it should remain recognizable that something was removed. In this context one speaks of a "memory of forgetting".

In Egypt , the pharaoh Hatshepsut and the pharaoh Akhenaten as well as the other kings Semenchkare , Tutankhamun and Eje II, who were connected with the Amarna period , were affected by this type of vengeance. Therefore only a few pictures and (mostly) no mummies have survived and their names are not included in the Egyptian king lists. Although Tutankhamun's name is also missing from the king's lists, his grave escaped destruction, as it had already been buried by the debris of another grave at the time of the ostracism. Queen Nitokris is also included.

In Greece, Herostratos tried to make his name immortal by setting fire to one of the Seven Wonders of the World , the Temple of Artemis in Ephesus , and thus completely destroying it. In retaliation, he was told before his execution that his name would never be spoken again for all time and that his act would be pointless. In Ephesus itself it was henceforth forbidden to use the name under penalty of death. Only by mentioning the historian Theopompus was it preserved for posterity.

Around 280 BC An extant law from the Polis Ilion (OGIS 218) stipulated that the names of those who made common cause with tyrants or oligarchs were to be chiseled out of all public and private inscriptions. And in the Second Macedonian War , the Athenians destroyed all the inscriptions and statues of King Philip V a few decades later , possibly at the request of the Romans.

The Roman Senate had emperors Caligula , Nero , Domitian , Commodus , Geta , Elagabal and Maximinus Thrax, among others , punished in this way (according to Cassius Dio, Caligula was only de facto , since Emperor Claudius prevented a real damnatio of his nephew). The wording of a (presumably fictitious) damnation decision has been handed down in the Vita Commodi of the Historia Augusta (20, 4–5), and traces of the damnatio against Geta have been preserved on a papyrus (BGU 2056). About Alexander Severus and Gordian III. no damnatio was officially imposed, but there are still inscriptions and images that have been processed accordingly.

The portraits of the emperors concerned (statues, busts, herms, coins, etc.) were often destroyed or damaged, but sometimes also confiscated and reworked into portraits of other personalities. Traces of the modifications can still be found on the statues today. A noticeable feature for such a makeover is z. B. a proportionally too small head for the body, with noticeably large or protruding ears. In the portraits of Emperor Nero, traces of curls can still be seen on the neck of the reworked portraits, as Nero presented himself as a great artist and accordingly was portrayed with long hair in the artist's costume. In inscriptions, the name of the emperor concerned was deleted. 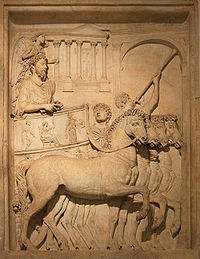 In this relief, which shows Emperor Marcus Aurelius on his triumphal procession in 176, Commodus , who was originally depicted to the right of his father, has been completely removed.

Whether a dead princeps succumbed to the damnatio or, on the contrary, was raised among the gods ( apotheosis or divinization), was in fact the decision of the successor, not the senate. Not only did Claudius prevent the damnatio of Caligula, but apparently also Antoninus Pius that of the unpopular Hadrian . Some of the emperors, whose memory the damnatio had been imposed, were also rehabilitated by a so-called restitutio memoriae . B. Nero under Otho and Vitellius and in particular Commodus under Septimius Severus , who enforced a complete restitutio including apotheosis, as he claimed a fictitious relationship with Commodus. The damnatio procedure was also used against politically unpopular senators during the imperial era. As I said, it should not have been about eradicating memories - because the names of emperors who were damned could still be mentioned - but about cursing memory. The damnatio seems to have never been expressly ordered outside of Rome: The order to deny Gnaeus Calpurnius Piso it can be inferred that the provinces were only told how to proceed in the capital; the decision to emulate this was formally up to the local authorities.

In late antiquity , the damnatio was decreed less often, but remained common; one example is the usurper Magnus Maximus , who was damned in 388. The senator Virius Nicomachus Flavianus , who had supported the usurper Eugenius in 394 , seems to have been deleted from an inscription (CIL VI 1783) and reinserted years later; and in the case of Heraclianus the corresponding law from the year 413 has been preserved (Cod. Theod. 15,14,13). Even Theodoric the Great was a damnatio memoriae occupied: 552 the commander destroyed Narses on behalf of the Emperor Justinian I , the Ostrogothic and integrated Italy in the Eastern Roman Empire . All memories of the rule of the Goths should be demonstratively erased. For example, B. the mosaics in San Apollinare Nuovo in Ravenna undoubtedly originally depict Theodoric, who died in 526, and his entourage in Theodoric's palace; here one can safely say based on some remains that the figures depicted in front of the building were removed and replaced by pictures of curtains (the hands are partly still visible - in all likelihood on purpose). At the same time, the Arian church became a Catholic church. Prokopios of Caesarea proves that the process was still known in principle around 550 .

Procedures of subsequent ostracism can be found up to the present day. They are sometimes also referred to as damnatio memoriae or damnatio in memoria , although in the age of modern propaganda it was often actually about erasing unpleasant people and events from memory (although the success cannot be checked). On a large scale, especially under Stalin, photographs and paintings were subsequently changed in order to erase people from the collective memory with whom the dictator was no longer to be portrayed in the meantime . In many cases, these were people who fell victim to the Stalinist purges or, like Leon Trotsky, were in clear opposition to Stalin.

But Stalin himself was also affected by a damnatio memoriae as part of the de-Stalinization : An example is the story of the painting by the painter Vladimir Serov from 1947, which was awarded the Stalin Prize: The work Lenin proclaims Soviet power shows Stalin in the wake of Lenin . Ten years later, Serov changed the work according to the new official guidelines, replacing Stalin with a different person. As part of the de-Stalinization, topographical objects were renamed or renamed, as was the case with Stalinstadt . In sport in the GDR, athletes who had fled from the GDR (e.g. Jürgen May ) were deleted from the best and record lists on several occasions in order to erase them from memory.

The topic finds literary implementation in George Orwell's novel 1984 , in which so-called non- persons are retroactively removed ( "vaporized" ) from newspapers and other media after their murder .