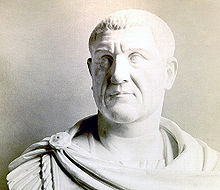 Gaius Iulius Verus Maximinus or Maximinus I (* 172 or 173 or up to ten years later in Thrace (?); † April 238 in Aquileia ) was Roman emperor from 235 to 238. He is traditionally considered the first " soldier emperor ", and the imperial crisis of the third century is said to have begun with his reign .

Milestone, erected in Ovilava (Wels) in 236 AD by order of the Roman emperor Maximinus Thrax and his son Gaius Julius Verus Maximus 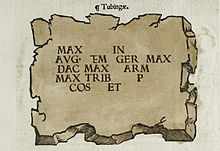 Inscription from Tübingen for Maximinus Thrax, drawn by Petrus Apianus

In contrast to most of the Roman emperors before him, Maximinus, if one may believe the problematic sources, came from a very simple background and did not belong to the nobility . His often-cited origin from Thrace is not considered certain by all historians. For example, the ancient historian Willem den Boer (1914–1993) saw the designation of origin Thrax (for Thracians), which was often unreflectedly adopted , as a "generalizing superficiality of research", since the epithet is not proven by contemporary sources and is only attested around 400. The ancient historian Franz Altheim (1898–1976), on the other hand, was certain that, due to the concentration of regional inscriptions, he could assume that the emperor was born in Lower Moesia .

Maximinus was said to be poorly educated. It is even reported that he could not even speak Latin properly, but this is likely to be a slander: Since he was a Roman knight ( eques ) at the time of his elevation to the emperor , but not a senator, the Senate-friendly tradition made him consciously a peasant booby defamed. Sometimes it has even been claimed (with reference to the very questionable information in the Historia Augusta ) that he was descended directly from barbarians and was the son of a Goth named Micca and an alanine named Ababa , which is certainly not true. His name rather indicates that he came from a family that already before the Constitutio Antoniniana Roman (212), with all the free imperial residents citizens were, the Roman citizenship had: The cognomen Verus leaves a citizenship ceremony at the Emperor Lucius Verus ( around 165) seem plausible, which probably benefited Maximinus' father or grandfather. In this respect, however, we cannot be certain. The height of the emperor seems to have been remarkable; it is given in the Historia Augusta with 2.60 m, which is certainly greatly exaggerated.

Like many residents of the Roman Balkan provinces, he joined the army early - probably under Septimius Severus - in which, according to the Historia Augusta , he quickly became known for his physical strength and military skill. Since the information in Herodian's historical work is not very specific and those in the Historia Augusta are largely fictional, Maximinus' career before 235 can only be reconstructed in part. Gaius Iulius Maximinus, mentioned in an inscription as the deputy governor ( praeses pro legato ) of the province of Mauretania , is identified by several researchers with the later emperor. If this is the case, then Maximinus also held important positions in the administration and was certainly not uneducated.

His wife's name was Caecilia Paulina ; it evidently came from the nobility , which presupposes connections to the upper class and is a further indication that Maximinus' depiction as an uneducated brute is a product of tradition hostile to him and does not correspond to reality. Paulina died before or immediately after her husband took power. From 236 Maximinus had coins minted in her honor; at this point she was already dead. Their son was named Gaius Iulius Verus Maximus .

Maximinus probably played a leading role in the Persian campaign of Severus Alexander and, according to some sources, was appointed governor or commander of the province of Mesopotamia in 233 . If this (uncertain) statement applies, Maximinus could have been the first dux ripae there. What is certain is that in 235 during the preparations of the emperor Severus for the war in Germania he directed the training of the newly raised troops (presumably as praefectus tironibus ), whereby he gained respect among the soldiers. In March 235 he was proclaimed emperor by the discontented Rhine Legions near Mogontiacum (Mainz), then Severus Alexander was murdered. Although Maximinus was now a Roman knight, he was most likely not a member of the Senate (despite some contradicting statements in the Historia Augusta ), which probably made him an unworthy candidate for emperor in the eyes of many senators. However, after the news of his emperor's elevation had arrived in Rome, he was immediately admitted to two important colleges of priests in absentia and officially recognized by the Senate as a princeps and given the appropriate powers.

Right at the beginning of his term in office, he was allegedly able to uncover two conspiracies. It remains very controversial whether his relations with the Senate were as shattered from the start as Herodian claims. It is more likely that he had both friends and enemies among the senators. Maximinus successfully waged war in Germania in 235/36 and received the honorary title Germanicus Maximus (“greatest Germanic conqueror”) after a victory in a great “battle in the moor” ( proelium in palude ). In older research, these fights were located in the area of ​​today's Württemberg, while more recent archaeological finds suggest southern Lower Saxony as a likely battle site. Details of these campaigns are not known. Various finds from a battlefield from the early 3rd century discovered in summer 2008 near Kalefeld in the Harz foreland suggest a connection with the Emperor's Germanic War (→ Harzhorn event ). The emperor had pictorial representations of his victories displayed together with the booty in the Roman Forum . On the other hand, the Roman troops seem to have suffered setbacks in the east, where the Neo-Persian Sassanids were able to take some important cities in northern Mesopotamia during the reign of the emperor . Maximinus probably appointed his son Maximus Caesar in 236, i.e. co-emperor and presumptive successor, thus making it clear that he wanted to found a new dynasty.

Immediately after taking office, Maximinus is said to have initiated persecution of the church leadership because they were engaged in an “illegal cult”. “Christians have been blamed for all kinds of evils: lost battles, social decline, epidemics, natural disasters. The thrust of Maximinus: to cut the tips in order to then disperse the lost flock. ”This affected Pope Pontianus and Antipope Hippolytus , along with others .

Dispute with the Senate 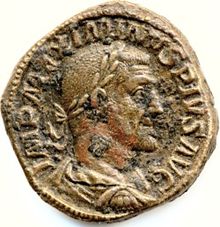 A sesterce of Maximinus Thrax

Although he always had partisans in the Senate and his Danube campaigns against the Sarmatic tribe of the Jazygen and against the Dacians were also successful, he was evidently unpopular with many senators. All in all, he seems to have relied less on senators than his predecessor in carrying out the business of government. Various reasons are assumed for the resistance that has formed in the Senate: Many nobiles considered his origins to be inappropriate; and his campaigns were so costly that he allegedly even had to take money from the poor fund and grain supply of Rome. In addition, he probably denied the Senate in Rome the usual right to have a say and based his rule largely on the Rhine and Danube regions. Maximinus also never visited the capital Rome during his tenure, which was probably interpreted there as a sign of a lack of respect. According to reports handed down by Eusebius of Caesarea ( HE VI, 28), he is said to have also acted against Christianity , which certainly played no role in the conflict with the pagan Senate and only appeared as a negative feature in the emperor's biography at a later time . The emperor's financial and tax policy was downright unpopular. Although he pushed ahead with the expansion of the road network in addition to military spending, the ruler's costly attempt to resolve Rome's foreign policy problems through extensive campaigns on the Rhine and Danube met with a general lack of understanding, which was particularly virulent in the south and east of the empire where one was concerned only noticed the increased tax pressure, but not the successes. Maximinus apparently did not understand how to promote his politics efficiently.

From a local incident out finally a rich-wide uprising against the emperor developed: In the Year of the Six Emperors 238 was in the province of Africa after the murder of an imperial procurator by the local landholding of about 80-year-old proconsul of Africa , Gordianus, as Gordian I. proclaimed emperor . His son Gordian II, apparently inexperienced in military terms , became co-emperor. The rebels sent envoys to Rome who murdered the city ​​prefect and the Praetorian prefect and persuaded the majority of the senate to recognize the two Gordians as emperors. Maximinus was simultaneously declared an enemy of the state ( hostis ) by the Senate .

Only 20 days after the proclamation of the opposing emperor, Maximinus was able to crush Capelianus and Gordian II, the governors of the neighboring province of Numidia who had remained loyal to him . Gordian I. committed suicide when he learned of the death of his son. For fear of Maximinus' revenge, the Senate in Rome now appointed Pupienus and Balbinus as new emperors with equal rights who were to organize the resistance against Maximinus. The plebs of Rome also forced the election of Gordian III. , a grandson of Gordian I, to Caesar . Maximinus marched against Italy, but was probably  murdered by his own troops - more precisely: by soldiers of the legio II Parthica - in April during the siege of Aquileia on the march to Rome . His son died with him, and their heads were sent to Rome. The emperor's head was carried through the city on a lance.

Tradition has it that the picture of Maximinus was painted in dark colors; to what extent this view is justified remains unclear. The traditional view, which can be traced back to ancient authors such as Aurelius Victor , according to which the reign of Maximinus marked a deep turning point in the history of the Principate , has been questioned repeatedly in recent years. It is undisputed that structurally little changed in the Roman Empire during his reign between 235 and 238 . The question of whether Maximinus should be regarded as the first soldier emperor or just a forerunner is still open. Most of the emperors who succeeded him up to 268, with the exception of Philip Arabs, again belonged to the senatorial class.