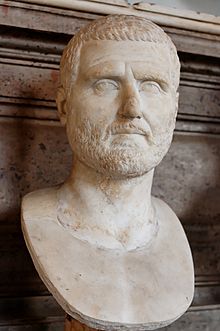 Bust of Gordian in the Capitoline Museums

Sestertius of Gordian with his nickname AFR , Africanus .

Little is known of the early life of Marcus Antonius Gordianus Sempronianus Romanus Africanus, as he was called by all his nicknames. The family probably came from Asia Minor , from Phrygia , Galatia or Cappadocia in what is now Anatolia . His parents were supposedly Maecius Marullus and Ulpia Gordiana. In addition to Gordian II, Gordian had at least one other child, the daughter Maecia Faustina , mother of the future emperor Gordian III .

Gordian was already 80 years old when he was proclaimed emperor by the Senate - allegedly against his will - after a revolt by the large landowners in North Africa , as the latter feared their expropriation by Emperor Maximinus Thrax . At the same time Maximinus, who ruled the Roman Empire as a soldier emperor from Sirmium near today's Belgrade and had denied the Senate any say, was declared an enemy of the state.

However, Capelianus , the governor of Numidia , was loyal to Maximinus Thrax and easily defeated Gordian II, who had no military experience. As Gordian I learned of the death of his son, he committed the same day suicide . Thereupon Pupienus and Balbinus were installed by the Senate as emperors of equal rank and Gordian's only 13-year-old grandson Gordian III. appointed co-regent and declared successor.

Commons : Gordian I.  - Collection of images, videos and audio files