Denarius at the wedding of the emperor, summer 241 AD

Marcus Antonius Gordianus was born on January 20, 225 in Rome. The names of his parents in the Late Antique Historia Augusta are fictional. It is very likely that his mother Antonia Gordiana was a daughter of Gordian I and therefore sister of Gordian II . In May 241 he married Furia Sabinia Tranquillina , daughter of his future Praetorian prefect Gaius Furius Sabinus Aquila Timesitheus . On the occasion of this wedding, denarii were minted with the Diana Lucifera on the reverse. The marriage remained childless.

After the death of the two Gordians in January 238, the Senate of necessity took over the resistance against the incumbent Emperor Maximinus Thrax , who had previously been declared an enemy of the state, and appointed two Augusti of equal rank from its own ranks, Balbinus and Pupienus . With the help of the Praetorians , who felt they had been left out by the actions of the Senate in the imperial election, the urban Roman population pushed through the appointment of 13-year-old Gordian (III) as Caesar and princeps iuventutis . After Maximinus' violent death near Aquileia in mid-April (?) 238, obvious differences between Balbinus and Pupienus emerged. Both strove for sole rule. In this situation, the Praetorians took the initiative: They killed the two Augusti in the Imperial Palace and forced the Senate to recognize Gordian's claim to power. Gordian was thereupon proclaimed sole emperor and appointed Augustus at the beginning of May 238 . 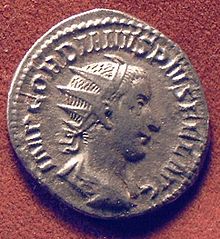 At the beginning of his rule was Gordian III. under the influence of the Senate, which directed the emperor through a staff of advisors. In terms of domestic politics, the first thing was to stabilize the situation after the chaotic conditions of the first few months of 238. This meant restoring the government's authority on the basis of acceptance by the army and the senate (or formally also by the urban Roman population).

As a sign of consensus, the Legio III Augusta , which, under the Mauritanian governor Capelianus, had put down the rise of the Gordians in the province of Africa , was dissolved (which soon led to military problems in the now almost defenseless North Africa). Senator Aedinius Julianus became the new Praetorian Prefect - an unusual decision, as the post was actually reserved for knights. The provincial governor of Hispania Citerior , Quintus Decius Valerinus, the Gordian III. refused recognition, was replaced towards the end of 238. The urban Roman plebs were appeased through donations and the organization of games, and the army was promised the usual cash payments ( donations ) when rulers changed . The tax pressure on the Reich population was slightly reduced and the self-government of the cities strengthened. Evidence of the various measures is a noticeable increase in legal activities at the beginning of Gordian III's reign.

The enormous financial burden, however, led to currency devaluation with noticeable effects on prices and wages. In the years 239 and 241 Gordian himself held the consulate . In 240 Sabinianus was proclaimed emperor in Carthage . The usurpation was put down by the governor of Mauritania that same year. In the same year the important border town of Hatra in Mesopotamia, allied with Rome, fell to the growing New Persian Sassanid Empire . The Persians crossed the Euphrates and threatened Antioch and the province of Syria . The Persian threat should last the last years of Gordians III. coin (see also Roman-Persian Wars ). The Romans reacted by preparing for a Persian campaign, which Pupienus and Balbinus had probably already decided. The knight Gaius Furius Sabinus Aquila Timesitheus was entrusted with this task . Timesitheus was appointed Praetorian prefect at the beginning of 241 and from then on led the affairs of state for the emperor, over whom he gained great influence. Preparations were completed in early 242. After the ritual opening of the gates of the Temple of Janus (probably for the last time in antiquity ), the emperor and the army went east. In the autumn of 242 the army reached Antioch and was able to restore security in the province. At the end of 242 or beginning of 243 the loyal Timesitheus died under unknown circumstances, he was followed by his deputy Philip Arabs in the office of Praetorian prefect.

At the beginning of 243 the Roman legions moved into the province of Mesopotamia and defeated the army of the Persian king Shapur I , who had since succeeded his father Ardaschir I , in the battle of Resaina (presumably still under the leadership of Timesitheus) . Control over the province of Mesopotamia was restored. Around autumn 243 the Roman army probably advanced against the main Persian residence Ctesiphon , but the Romans suffered a heavy defeat at Mesiche in early 244 .

Gordian III. probably died in February 244. Both the place and the exact circumstances of death are available to us in the sources different versions, so that it remains open whether he died in battle with the Persians or at the hands of his own soldiers. Possibly he was on his way back out of Persian territory when he fell victim to a mutiny by the soldiers. It is often assumed that Philip Arabs, out of his own striving for power, at least discredited Gordian III. operated in the army, if not directly responsible for his murder, but this is controversial. The Persian account, according to which Gordian fell as a result of the Battle of Mesiche , is considered by several researchers to be entirely credible, especially since later Byzantine sources (e.g. Johannes Zonaras ), which could fall back on older material, do not point to a murder of the emperor.

The sources paint a very positive picture of him - only in the Historia Augusta he appears quite miserable in the face of death - but they cannot deny that all in all, because of his youth, he was a weak ruler who was dependent on his surroundings.

Gordian III. belonged to the so-called child emperors of Rome. Despite the relatively short duration of his activity, research was able to identify five types of portrait.

a) Type 1 (archetype, before the accession to government) The portraits show little differentiated, symmetrical facial features. The physiognomy of Gordian III. is still recognizable, even if the facial wrinkles typical of Gordian are still missing. An example of this type can be found in the Conservator's Palace in Rome (Inv. 995).

This type of portrait represents Gordian III. with two transverse folds on the forehead and two vertical folds above the bridge of the nose. The emperor looks extremely concentrated. The stylistic device of the transverse folds, which can hardly be found in later types of portraits, as well as the alert gaze were obviously used to represent the dignity of rulers and maturity. The leading piece for this type is the trabea bust in the Pergamon Museum in Berlin.

The defining feature of this type, which apparently circulated at the same time as type 2, is the deliberate resemblance to Severus Alexander. For this purpose, different stylistic devices were used than with type 2. The contours are not so hard and the cross wrinkles on the forehead are missing. As a result, the portraits radiate more calm and mildness. The leading piece for this type is a bust in the Louvre in Paris (Inv. 2331).

This type of portrait renounces both the severity of type 2 and the imitation of the physiognomy of Severus Alexander from type 3. With a more distinctive and almost rectangular skull profile, through the suggested growth of beard and the guidance of the eyebrows, the emperor looks more mature and exudes optimism. The leading piece for this type is a bust in the Conservator's Palace in Rome (Inv. 479).

These last portraits of Gordian III. are elongated in length in the proportions of type 4, perhaps to portray the ruler heroically enraptured in the course of the Persian War. The leading piece for this type is an armored bust in the Louvre in Paris (Inv. 1063).

Gordian III. is documented in a number of sources, including

Even if none of these sources are considered to be particularly reliable and the later ones are often based on the earlier ones, as a whole they give a relatively clear picture of Gordian's life, but perhaps describe him too positively overall.