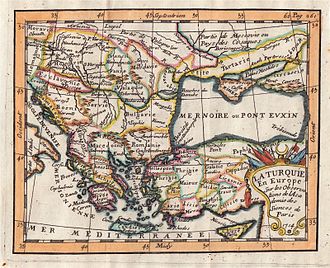 Phrygia ( ancient Greek Φρυγία ) is the ancient name of a region in western Central Asia Minor in what is now Turkey . This landscape is named after the Phrygians , among whom Phrygia was the heartland of a great empire in Anatolia that was founded in the 8th century BC. BC reached the height of his power under King Midas .

Phrygia bordered Cappadocia to the east, Pisidia and Lycaonia to the south, Lydia to the west, and Bithynia and Paphlagonia to the north-west and north .

The most important city in Phrygia was Gordion , located on the Sangarios River (now Sakarya ), 80 kilometers west-southwest of Ankara . Kelainai , located in the south of Phrygia, served the great Persian kings as a royal seat and was the most important market town in Asia Minor after Ephesus in Roman times. In late antiquity, the capital Kolossai , to whose Christian community the apostle Paul wrote a letter, was mentioned.

The Phrygians settled in the 12th century BC. BC , coming from Troas and Thrace , arrive in this landscape. This region had previously belonged to the Hittite empire . Beginning of the 7th century BC BC the Cimmerians invaded Phrygia and conquered Gordion. The Phrygian culture persisted for a long time.

End of the 7th century BC Phrygia became increasingly dependent on the Lydians . From 546 to 334 BC It belonged to the Persian Empire . In winter from 334 to 333 BC Chr. Was Alexander the Great to Phrygia. During his stay he is said to have broken the legendary Gordian knot .

Around 274 BC Chr. Were Celtic Galatians from the Diadochenherrscher Antiochus I Soter located in the eastern part of Phrygia. This area was soon named Galatia after them. Around the middle of the 1st century BC Chr. Phrygia became Roman and from then on belonged to the province Asia . Galatia was a Roman client state and was only annexed to the Roman Empire under the principle of Augustus .

This article or section needs to be revised: Midas (if identical with Mita von Muski!) Is for the 8th century BC. Proven. The dates of death (taking into account ancient sources) are m. W. especially 696 and 679 BC Discussed. The table is also not supported by secondary literature.
Please help to improve it , and then remove this flag.

In Phrygia the cult of the Great Mother Cybele and the wine god Sabazios , which is related to Dionysus , who was documented in Mycenaean times , was of importance. Cybele was later also worshiped by the Romans, where she was called Magna Mater deorum Idaea .