The title of this article is ambiguous. For the parlor game of the same name see Gordian knot (game) . 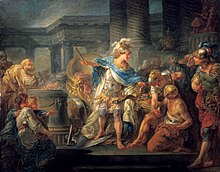 The term Gordian knot originally referred to artfully knotted ropes which , according to a Greek legend , were attached to the chariot of the Phrygian king Gordios . They inseparably connected the drawbar of the wagon with the yoke . The knot, which consists of the bast of the cornel cherry , became known because Alexander the Great is said to have cut it with his sword.

According to legend, an oracle prophesied that whoever could untie the Gordian knot would gain control over Asia. Many bright and strong men tried this task, but none succeeded. Plutarch and Quintus Curtius Rufus describe that in the spring of 333 BC Alexander the Great on his march towards Persia simply cut this knot with his sword and thus heralded his triumphal march through Asia.

There is another variant of the tradition of Arrian , which refers to Aristobulus of Kassandreia accompanying Alexander, according to which Alexander is said to have loosened the knot through cunning. It is said that he realized that all he had to do was pull out the drawbar nail to pull the yoke away.