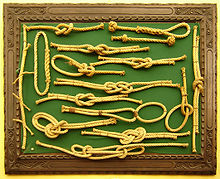 A simple overhand knot in a strip of paper

A node ( ahd chnodo , MHG knode nodular thickening ') is in the knots an entanglement or intertwining of yarn , string, band , rope , cordage , cloth or similar flexible fabric , sometimes a chain which is wound in a certain form, wrapped , tied or knotted. The turns of the knotted material pinch under tension, increasing the friction and reducing or preventing sliding. According to the way the winding course runs, node types can be distinguished from one another.

It should be noted that a knotted rope can no longer be loaded according to its original tensile strength , because the knot becomes a weaker point in the course of the rope. The remaining reduced tensile strength is called the knot strength . In addition, the rope friction on a solid object can reduce the load capacity.

Knots are used for different purposes and in very different areas of application, which is why there are often several names for the same type of knot. If one wants to define the entanglement forms with the term knot in more detail, three meanings can be defined:

Humans have been using knots for half a million years. Even gorillas and other monkeys knot blades of grass when building nests.

As early as the Stone Age there were people who, as gatherers and hunters, later as settlers and fishermen, tied snares and nets in order to catch animals and fish. The axes of the Stone Age were held together by knotted intestines, as were the pile dwellings with sinews and ropes. The simple overhand knot was used to tie together everyday objects. The fillet knot (an overhand knot tied around a guide) for tying the nets developed from it. To hunt with a bow ( Paleolithic , 30,000 to 10,000 BC), the bowstring had to be securely attached. The Ötzi glacier find (around 3340 BC in the Neolithic Age ) shows simple knots, overhand knots and square knots on his equipment.

The oldest tradition of decorative knots comes from the Assyrians from antiquity (900 to 609 BC). Reliefs carved in stone showed tunic-like robes, tunics and horse blankets. They are decorated with tightly linked fringes and thick tassels .

In ancient times, certain knots were even given magical powers. Homer mentioned in Canto 8 of the Odyssey that Odysseus " tied up valuable gifts from Alcinous and the Queen with a rope, which he secured with a magical knot in the artistic manner of Kirk ."

The Roman scholar Pliny the Elder (approx. 23–79 AD) claimed that the Hercules knot would heal wounds faster that were closed with it.

After 756, the Moors brought Arab influences in knotting technology to Europe ( Córdoba / Spain).

With the crusades (1096 to 1270) up to the late Middle Ages , the relatively simple fringes of the Egyptians and Assyrians developed into artistic knotted edges . The old Inca empire (1250 to 1781) knew " Quipu ", a knot script which transmitted statistical records in the decimal system .

The third major influence came from Christian seafaring . A large number of " Schifferknoten " were used for a wide variety of purposes. In their voyages, which often lasted for months, the seafarers began to knot, in addition to their well-known utility knots, in their free time with yarn and rope according to patterns that they had seen in the Orient. They decorated their ships with artfully knotted bells, knotted bottles and much more. Often these works were of no practical value, they were more for decoration. This "knot art" is cultivated as fancywork, plating and macrame.

New knots are continually being invented for today's requirements, for example the Zeppelinstek or the snap-hook knot . In the 1980s, Scoubidou became known, which was widespread among young people in 2004.

The Zeppelinstek or Zeppelin knot is one of the "youngest" knots, which has been recognized in the professional world.

With Rainbow Looms , various objects such as ribbons, bracelets or large-scale links or interweaving using rubber rings are made. 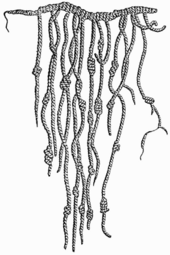 Knots were also used as writing in the past . The Incas used the knot script Quipu . Farmers and millers used knots as an aid to counting ( miller's knot ).

The hangman's knot on the gallows was used to execute a convict. In the Middle Ages, a document knot was tied in the straps of the document when a contract was concluded . The number of knots proved how many men were involved in the conclusion of the contract and agreed with the content of the contract. The “knot” was therefore considered a witness or witness in the court.

In coats of arms the " love knot " served as a coat of arms figure in love cords or love ropes, which in the 17th century (France) served as fashionable creations and decorations. The love knot is also known as the "widow's rope".

Even today they can still be found in the badges of Scottish clans.

Bamboo poles are fixed to a bamboo frame by knots

Knots are used by many professional groups and in many sports:

Whacking on the Prince Heinrich cap

In the bondage scene, fixing or decorative knots are used for bondage and other sexual practices .

Tricks for entertainment can also be demonstrated with knots. Such knot tricks are used especially in magic tricks . A meaningful, practical application is usually impossible in everyday life.

Nodes are u. a. for the analysis of macromolecules such as proteins and DNA of interest. Science has been concerned with the mathematics and physics of knots for centuries. The knot theory deals with the topology of nodes and answering of questions serves as which nodes are mathematically equivalent, d. H. can be converted into one another without having to be cut up. The knots , however, is concerned with the production, differentiation and application of nodes.

Given the complex interplay between topology and mechanics , the properties of elastic nodes are difficult to determine. Researchers at the Massachusetts Institute of Technology developed a model in 2019 to predict node stability. In doing so, they consider the number of crossings, the twists and the opposing strands. To test their theory, the researchers made experiments with photonic fibers that change color when pulled.

Under the International Guild of Knot Tyers , an association of like-minded people from all classes and professions was founded in London in 1982 . From beginners to specialists with an interest in knots, the exchange takes place in forums and member magazines. Due to the constant development of synthetic fibers , the area of ​​application of knots is constantly being expanded and updated. 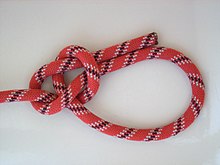 The fixed end is the long part of a line on which the load hangs or pulls, for example a crane rope or a lasso, or on ships a mooring line, an anchor line, a sheet, a halyard. In the classic sailor's language one speaks of the "fixed" or " standing part ".

The loose end is the short part of a line with which the knot is tied or tied and which hangs unloaded from the finished knot. The loose end on the finished knot should always be at least 3 to 5 times as long as the diameter of the line. In the classic sailor's language one speaks of the " loose part "; there the “end” has the meaning of a whole piece of rope. 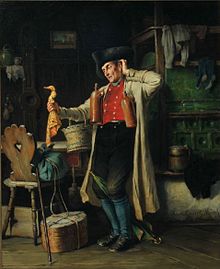 Sigmund Eggert: But forgot ... , painting from 1881 (motive: a man has tied a knot in his handkerchief, but can no longer remember the reason)

for an overview with German names for the category categories, see Commons: Subcategories of Nodes