The lanyard is in the Bundeswehr one worn only for representative purposes silver ( officers of Army and Air Force ) or gold ( generals and naval officers ) string of metal fabrication . Soldiers of the Guard Battalion of the Austrian Armed Forces also traditionally wear uniforms with lanyards for representation tasks.

Originally, the lanyard was intended to prevent the wearer from losing his headgear. (see lanyard (headgear) )

Usually it was made of cotton for enlisted men and non-commissioned officers and made of metal web for officers. In most cases it was about five millimeters thick cord that was put into a loop and the ends of which were artfully intertwined. To attach it to a special helmet hook and to the neck, three sliders were pulled over this loop.

The lanyard used to be a piece of equipment for the cavalry and also served as an ornament. Since 1897 it has only been part of the parade uniform and no longer part of the field equipment. 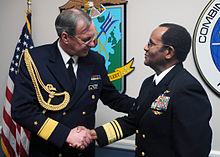 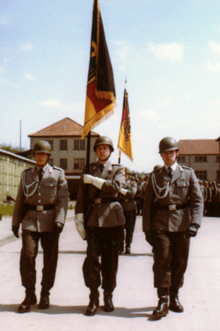 Line of the flag escort officers of the Bundeswehr 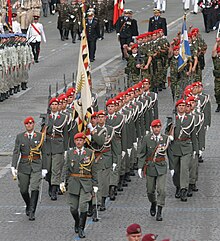 In the Bundeswehr, a silver (army and air force officers) or gold (generals and naval officers) cord made of spun metal is called a catch cord. It is carried by:

Differentiation from other cords to the uniform

The service cords and marking cords are to be distinguished from the actual catch cord. The service cords included z. B. the adjutant cords and the shoulder cords still worn today in the army and air force of the Bundeswehr of the officers from the security service (OvWa) of the watchkeepers , the company field weavers , etc. The rifle cord is also one of the award cords .

The uniform of soldiers of the Guard Battalion differs from the uniforms of the other units of the Austrian Armed Forces by the scarlet beret , the red collar tab with white protrusion and the wearing of a lanyard.