This article deals with prophecy - for the film see The Oracle , for the waltz Oracle Proverbs . For more see: Oracle (disambiguation) .

The Delphic Sibyl in the Sistine Chapel

Oracle (from the Latin oraculum “gods pronouncement , speaking place”; to orare “speak, pray”) denotes a transcendent revelation obtained with the help of a ritual or a medium , which serves to answer questions about the future or decision-making . The hints and signs obtained by means of the oracle can serve the questioner as a justification for their own decisions and actions.

In contrast to clairvoyance ( extra-sensory perception ), which is viewed as an individual ability of a person in the body , the oracle always questions a higher authority . In expecting a question to be answered, the oracle is vaguely similar to prophecy , which is usually, but not always, given uninvited.

In a broader sense, the place where the oracle was given is also referred to as such. Oracle sites can be sanctuaries such as temples. The best known example is the oracle of Delphi .

As a practice of prediction, oracles have always had a high level of social acceptance. In pre-Christian times, especially in antiquity , oracles were considered the dominant form of foresight. The history of oracles in ancient times was closely linked to political decisions and military operations from the very beginning. Even if the oracle was controversial at its wedding, it was given great importance by both supporters and opponents. The oracle as an established practice of prediction was later superseded by prophecies, utopias and prognoses. It did not disappear, but lost its social and political relevance.

Oracles existed as early as ancient Greece , of which the oracle of Delphi is the best known. Other important ancient oracle sites were Ephyra , Olympia , Dodona , Klaros , Didyma and the ammonium in the Siwa oasis (see also Apollon's fish oracle in the Lycian Sura , fish oracle in the Carian Labraunda ). They lost since the 4th century BC. BC to the 4th century AD in importance. In a broader sense, the Sibyl of Cumae is also to be counted among the oracles (see also astragal oracle ).

Strongly influenced by the religion of the Etruscans , the Romans tried to fathom the future of heavenly signs (lightning and thunder) or the flight of birds in a state cult of the pontifices and flamines . The Haruspices created oracles by reading the bowels of the sacrificed animals (so-called liver viewing ). The latter went back to Etruscan traditions .

In ancient Israel there were the Urim and Thummim : lottery and oracle stones of the high priest of the Israelites. The advice and warnings of the biblical prophets can also be viewed as an oracle , often beginning with: "Thus says the Lord: ..." 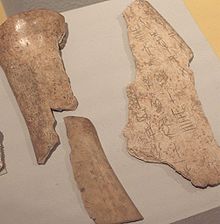 Oracle bones from the Shang Dynasty

In China , oracles with animal bones heated in the fire and with yarrow stalks were particularly popular. Compare with the Chinese Oracle . As part of the Tibetan culture, oracles can be found both in Bön , the pre-Buddhist religion of Tibet , and in some schools of Tibetan Buddhism .

The first time in Tibetan Buddhism that a secular deity was associated with a person's body to function as a physical medium was in the 8th century. One day, before the king and his ministers , Padmasambhava united one of the four great kings (the protectors of the four directions often depicted on the doors of Tibetan temples) with the body of a young man. By using the boy's body as a medium, the clairvoyant deity was able to identify the spirits that were causing trouble. The deity explained that the spirit Thangla was responsible for the lightning strike on the Marpori (the red hill that later became the seat of the Potala Palace ) and that the spirit Yarla Shempo caused the flood that washed away the Phangthang Palace. Through the medium, the deity gave predictions and advice. As a result, other protective deities were also used as oracles.

In the Gelug Buddhist school, the Nechung oracle is particularly known. According to tradition, the Buddhist protective deity Pekar , the former guardian spirit of the Samye monastery (built around 775), has used a monk as a medium for more than four centuries to predict future events and to guide the Tibetan government with advice. The monk serving as a medium therefore has the greatest reputation in the Gelug order. Due to its frequent, very debilitating oracle trances , it usually only has a short life expectancy. The Nechung oracle is still the most important state oracle of the Tibetan government in exile and the Dalai Lama . There is at least one other oracle that is well known, the oracle of Dorje Shugden .

Depending on the oracle consulted, the prophecies received may differ. The Tibetan word for Oracle is Mo .

There are also so-called oracle or fortune telling cards that are used for the same purpose. The best known are the tarot cards, which are used in a variety of different designs. Runes are well-known representatives from the Germanic culture .

In 1965, Hans Magnus Enzensberger critically referred to the Institute for Demoscopy Allensbach as the oracle of Lake Constance , as he saw a “structural similarity to the mantic practices of the Old World”. “Demoscopic surveys are generally commissioned: the ignorant makes his offerings to the priests of Allensbach and asks his questions. The Pythia does not answer on its own, it passes the questions on to a higher authority, to the voice of God, which in the jargon of the demoscopes means "representative cross-section". "

Oracle (English pl. "Oracles") is sometimes used in the English-speaking world for the Holy Scriptures (Bible = "truths of the Lord") and in the terminology of the Church of Jesus Christ of Latter Saints (Mormons) are modern, living prophets referred to as "living oracles" [of the Lord]).

During the 2010 soccer world championship , Paul the octopus from the Oberhausen Sea Life Center achieved international fame because he correctly "predicted" all winners when the German national soccer team and the winner of the 2010 World Cup final.