Padmasambhava (in German: Lotosgeborener ; also: Guru Rinpoche , Guru Padma , Padina Sambhava or Padmakara ; 8th century AD to 9th century AD ) is considered the founder of Buddhism in Tibet at the time of King Thrisong Detsen (756 to 796) in Tibet .

There are few historical facts about Padmasambhava's life; his existence is shrouded in legend to a large extent . He grew up as the foster son of King Indrabhuti in today's Pakistan . He should, as among other things, in the Seven-line prayer in the Ngöndro Exercises of the Nyingma held -Tradition not born of a woman, but miraculously on a lotus in a lake in Oddiyana be born. The land of Oddiyana, which can be traced back to Buddhist scriptures, is now believed to be in the ancient region of Gandhara . Various sūtras of the historical Buddha Shakyamuni indicated his coming, such as the Nirvana Sutra , the Sutra of the Immaculate Goddess and the Sutra of Incredible Secrets . Padmasambhava is considered to be an incarnation of the Buddha Amitabha , in which the Siddhis of all Buddhas of all times were manifested.

According to tradition, he was adopted as a son by the king of Oddiyana, but later banished from the kingdom because he is said to have killed the son of a minister. The stories also tell of his life, that he studied the five classical sciences of India and astrology , was ordained as a monk in India by Prabahasti and received the teachings of outer and inner tantras from many Indian masters in the following years . He was a student of the "Eight Holders of Knowledge of India" (Hungkara, Manjushrimitra , Nagarjuna , Prabhahasti, Dhanasamskrita, Vimalamitra , Rombuguhya and Shantigarba) and many other masters. He received the teachings and empowerments of the "Great Perfection" ( Dzogchen ) from Garab Dorje and Sri Singha . Princess Mandarava of Zahor was Padmasambhava's Indian tantric companion, Princess Yeshe Tsogyal of Kharchen was his most important tantric companion in Tibet. Both are often shown on thangkas at Padmasambhava's side.

Foundation of the Samye Monastery 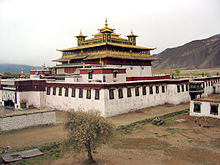 Padmasambhava's life stories contain many depictions of his supernatural work. He is said to have subjugated the spirits and demons of the snowy land, who opposed Buddhism, through tantric powers and tied many of them to the Buddha's teachings as Dharma protectors . Due to his special abilities, Padmasambhava was decisive for the establishment of the first Buddhist monastery Samye . With the establishment of this monastery (in the year 769 or 775) by the Tibetan King Thrisong Detsen (759–797), the first wave of translation of Buddhist scriptures from India to Tibet began. From this first translation period from the end of the eighth century the school of "old translations" ( Nyingma ) emerges, in contrast to the second translation period from the eleventh century from which the "new schools" ( Sarma ) of Tibetan Buddhism ( Kadam , Kagyü , Sakya and Gelug ) developed. The Nyingma tradition traces its tradition back to the introduction of the Dharma (Buddhist teachings) at the time of Thrisong Detsen by Padmasambhava, Vimalamitra (a learned Siddha ), Vairocana and their hundreds of disciples, the Abbot Shantarakshita of Nalanda and the scholar Kamalashila . More than a hundred scholars and translators gathered at that time and translated the teachings of Sutra and Tantra from Sanskrit into Tibetan . Many of the esoteric teachings, especially the teachings on Dzogchen ("Great Perfection"), were brought to Tibet by Padmasambhava, Vimalamitra and Vairocana. 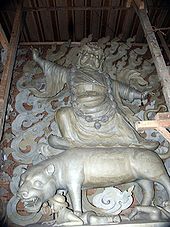 Of the disciples of Padmasambhava, the so-called 25 disciples of Chimphu have become famous for their high realization and the manifestation of Siddhi . These are:

A specialty of the Nyingma tradition are the "hidden treasures" ( terma ). Padmasambhava and his closest disciples hid hundreds of texts, ritual objects and relics in secret places in order to protect the teachings of Buddhism from destruction by the Tibetan King Lang Darma (reign 836-842) , who was hostile to Buddhism . Thus, in the Nyingma tradition, two types of transmission emerged: the so-called “long” transmission line from master to disciple in one uninterrupted line, and the “short” transmission line of “hidden treasures”. The termas discovered were later rediscovered by masters with special skills, so-called "treasure hunters" ( Tertön ), and passed on to their students. These masters were often considered to be the incarnations of the 25 main disciples of Padmasambhava. Thus, over the centuries, a complex system of lineages emerged, which constantly supplemented the teachings of the Nyingma schools with "fresh" teachings that were appropriate to their time and were intended to lead students to awakening ( Bodhi ). Important Tertöns included Nyangrel Nyima Öser (1124–1192), Guru Chöwang (1212–1270), Rigdzin Gödem (1307–1408), Dorje Lingpa (1346–1405), Pema Lingpa (1450–1521) and Jamyang Khyentse Wangpo ( 1820-1892).

Occasionally, however, Tertöns also appeared in the three new schools. Among these Sarma-Tertöns were the 3rd Karmapa Rangjung Dorje (1284-1339), the 5th Dalai Lama Ngawang Lobsang Gyatsho (1617-1682) and the master Jamyang Khyentse Wangpo (1820-1892), originally from the Sakya lineage ).

In the Buddhist context, however, hidden treasures are not something completely new. Termas have already been found in India. For example, Nagarjuna is said to have discovered the last chapter of the “ Prajnaparamita Sutra in One Hundred Thousand Verses” as a term in the mythological realm of the Nagas .

The "Six Great Seats of the Nyingma"

The around 35 meter high statue of the patron saint of Sikkim , Padmasambhava, in Namchi (South Sikkim)

The life stories of Padmasambhava largely agree that he stayed in Tibet for 55 years and during this time he awakened many disciples. According to the tradition of the Nyingma, Padmasambhava still works in this world to lead sentient beings to liberation and his blessings are available to all who turn to him. The main monasteries of the Nyingma School in Tibet are Mindrölling , Dorje Drag , Pelyül , Dzogchen , Shechen and Kathog . A large number of Nyingma monasteries derive their origin from these “great seats” of the Nyingma.