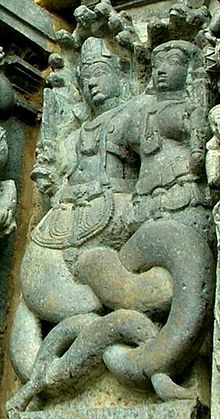 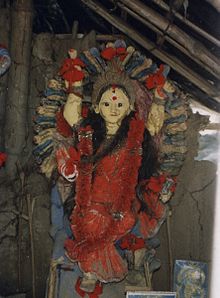 Naga ( Sanskrit , m., नाग, nāga , 'snake'; female form = nagi or nagini ) denotes a serpent creature or a snake deity in Indian mythology . There are different forms of representation: Either with a complete snake shape, as a human with a snake's head or with a human body that ends in a snake shape. There are also frequent depictions of multi-headed snakes or a multi-headed cobra hood. In northeastern India there is a special snake goddess named Manasa .

Nagas are known as beings with magical abilities and can assume human form at any time. Occasionally they are supposed to leave their kingdom and mingle with the people. They are seen as guardians of crossings, thresholds and doors, especially in a symbolic sense. The nemesis of the Nagas is Garuda , Vishnu's companion animal . Representations of the giant bird often show it with nagas in its claws.

Very often the words for snakes, snake demons, nagas, half-human, half-serpentine beings are indistinguished. However, several important snakes have names. In Hindu mythology, for example, it is Shesha (“the one who remains, the rest”) who carries the earth, another word is Ananta (“the infinite”), the serpent lying on the water, on which Vishnu in his form as Narayan rests in cosmic sleep. The popular legend of Krishna and Kaliya is also known throughout India .

In Buddhist mythology, however, the Naga king Mucalinda protected the Buddha from rain and storms in his meditation lasting several weeks by spreading his many heads over him like an umbrella. A similar legend relates to the Jaina Tirthankara Parshvanata .

In the southern Indian folk religion , Nagas, who are to be understood as chthonic (earthly) deities of pre-Hindu religious traditions, are often the object of cultic veneration. These cults fit more or less into the classical Hindu traditions one, for example, spatially-institutionally and on the adjacent figure: this place of worship that was built at the foot of an overgrown tree, located on the grounds of Vishnuite Vaigunda-Perumal TEMPLE in Kanchipuram and is evidently cultivated by its brahmins or temple servants.

In South India women often draw intertwining patterns outside the doors, called kolam in Tamil Nadu and kalam in Kerala . Its purpose is to invite the snake deity Naga, who should develop its protective, auspicious and fertile power for the residents of the house.

Nagamandala , Ashlesha bali and Sarpam thullal are ritual theaters in the south of the state of Karnataka , in which Nagasare worshipedin a mandala and the actor becomes obsessed by the mandala.

Through the cultural exchange between India and its northern neighbors Nepal and Tibet as part of the spread of Buddhism, Nagas were also integrated into the local mythology. In Tibet they are known as klu . They are among the eight basic forms of spirits and demons and are among the oldest of these forms. The largest lake in Tibet, the Yamzhog Yumco , is considered to be the home of the Naga kings.

Nagas are also known in Southeast Asia , where they reached with the spread of the Hindu religion at the latest in the 6th century. In Thai mythology, the innumerable horizontal planes of the mythical mountain Meru , the axis of the universe, are the abode of heavenly, earthly and subterranean beings. There, in the underworld, live next to the yakshas , the demonic guardians, and nagas, who are understood as snakes and dragons at the same time . In our world the Nagas inhabit magnificent palaces richly adorned with pearls and precious stones at the bottom of rivers, lakes and seas. At Mekong they should each year as Naga fireballs known wisps produce, offer the occasion for a celebration party. Nagas are also seen as protectors of spiritual treasures.

In the case of the kris , a wavy ceremonial dagger, which is widespread in the Malay island world , the connection to the mythical snake is often made clear by a snake's head, occasionally an elephant's head on the shaft ( ganja ). The way in which the kris is worn shows the social status of its owner. In Java and especially Bali the kris is used as a bearer of supernatural powers in ceremonies. The Balinese world rests on a turtle (Bedawang) and the two snakes Anantabhoga and Basuki. Wooden sculptures show a crowned Naga snake on the back of a turtle and on top the rice goddess Devi Sri.

In the cosmogonic myths of Indonesia , the symbolic animals of the underworld deities are mostly female and are in contrast to the upperworldly male symbols such as the hornbill or the rooster. The island of Nias in western Sumatra , like Bali, is carried by a naga, based on Indian mythological models.

Via the former Hindu-influenced cultures, mythological ideas of Nagas have found their way into the natural religious beliefs of several ethnic groups on the eastern Indonesian islands. Other Hindu elements are rare there. The local names for the mythical snakes also only occasionally go back to the Sanskrit word naga or the Indonesian ular ("snake").

Nagas among the Dayak

The Tuman- Dayak in Borneo , on the western border of the Indonesian province of Kalimantan Tengah , wear various animal masks during the traditional death ritual (tiwah) , including a luha nago (Naga). A naga figure with a hornbill stands on a post. When the wooden coffin is uncovered during the ritual dance at the beginning of the funeral ceremony, a large naga head appears at the top of the coffin, on which the feet of the deceased lie. The rear end is extended by a twisted naga tail. Nagas, which stand for the elements earth and water, often tower over the bow of large boats. A special representation of the Naga heads among the Tuman-Dayak possibly proves their alleged descent from the Minangkabau on Sumatra . The upper jaws are always extended far forward, similar to an elephant's tusk. A museum head on a canoe from Sumatra is a hybrid of a Naga and the Indian elephant god Ganesh .

Nagas on the Lesser Sunda Islands

In the traditional culture of some East Indonesian Lesser Sunda Islands (especially Alor and Pantar ), Nagas had a protective function in community houses ( Adat houses). The belief in the magical powers of the Nagas was largely lost through Christianization. Naga representations can still be found on a mosque built in the style of a traditional house in Lerabaing (Alor) and refer to the adoption of old ideas of ghosts in the Islamic faith.

At the beginning of the 20th century, missionaries burned all the snake-like wooden figures that were not hidden by the population in time. This was intended to demonstrate the powerlessness of these guardian spirits. On the island of Alor, the wooden nagas with a sacred stone at their feet were placed in the central village square ( fairground ) and were called ulenai . Since the Lego lego dance was also banned, the traditional funeral ceremonies could no longer take place properly, which meant that the ancestors from the afterlife were just as unable to intervene as the missing Nagas and the population did not know how they felt before the influence who was supposed to protect foreign Nagas.

Your own Naga can protect you from the malevolent Nagas of other people. The cause of this power lies in the creation myth of the first humans. The ancestor Manimoti tried two attempts to create people. At the direction of the supreme creator god Lahatala , he carved two wooden Naga figures and placed them under a pile of stones. When Lahatala breathed them, they started humming, but otherwise didn't move. Only the second attempt was successful. He formed the first humans, three men and three women, from rice and corn flour mixed with wax and water. Gong music brought them to life. According to this myth, Nagas are closely connected with humans, they are incomplete people who have received a soul through their breath, but who still lack the ability to live independently.

Around 1930, Ernst Vatter found two types of Nagas on the Lesser Sunda Islands: naturalistic wooden figures and abstracted "tendril nagas", in which the snake shape was still roughly recognizable. The naturalistic figures had a wide open mouth with pointed teeth, and underneath a bowl for offerings was made from the wood that the Rankennagas did not have. The tail of the naturalistic Nagas sometimes ended in a bird figure, a common snake-bird connection in Indonesian mythology.