The title of this article is ambiguous. Further meanings are listed under Mandala (disambiguation) . 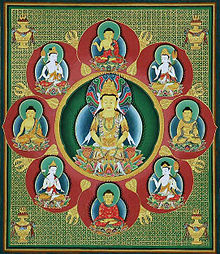 Detail of a sand mandala

The mandala ( Sanskrit , n., मण्डल, maṇḍala, “circle”, Tib . : དཀྱིལ་ འཁོར །, dkyil 'khor) is a figural or in the form of the yantra geometrical diagram, which in Hinduism and Buddhism in the cult practice a magical or has religious significance. A mandala is usually square or circular and always oriented towards a center. In its simplest form it can show a triangle representing a trinity ( Trimurti) symbolizes, in its largest form increased to the basic plan of a sacred building, the mandala embodies the entire universe with heaven, earth and underworld. It serves as a visual aid in order to be able to internalize complex religious relationships through the representation of gods, landscapes or symbols.

Mandalas are used for religious purposes, as symbols in rites . With Buddhism, the mandala as a meditation object, starting from India and Tibet , spread throughout East Asia .

In Tibetan Buddhism Vajrayana , mandalas show the view from above of a so-called mandala palace (see Kalachakra mandala), surrounded by a so-called pure land . In such a palace, various Buddhas or entire assemblies of Buddhas are visualized by the practitioner . In Vajrayana, mandalas are usually a two-dimensional representation of a three-dimensional spiritual object. These mandalas are used in Vajrayana to project the three-dimensional form optically and spiritually. Depending on the level of abstraction of the mandala, this leads to a deepened mental concentration. The attachment to the ego, the cause of all suffering in Buddhism , is diminished as the boundary between body identification and spatial experience is mentally crossed.

In the case of sand mandalas , the subsequent wiping away of the works that have been created in hours, sometimes even weeks, is of decisive importance . The transience of life and the ideal of being released from the material world should be symbolically implemented.

Due to the central importance of the four noble truths for Buddhism, almost all Tibetan mandalas start from this number four (or the square) and then form multiples of it towards the edge (8, 16, etc.). It is a number symbolism with sometimes complex meaning, see also the eight-petalled lotus flower in the illustration of Garbhadhatu Mandala (Japan).

Mandalas can be found not only in Vajrayana, but also in other Buddhist and Hindu cultures. Likewise in Indian cultures. The symbolism of a mandala should aim directly at the unconscious, so that certain areas of the psyche should be addressed and stimulated through certain colors and shapes. A mandala can contain abstract shapes and ornaments as well as representations of animals and other things, as well as all possible symbols from religion , esotericism or psychology . Natural motifs can also serve as a mandala.

Nagamandala , Ashlesha bali and Sarpam thullal are ritual theaters in the south of the state of Karnataka , in which the snake god Naga is worshiped in a mandala and the actor becomes obsessed by the mandala.

In the Sino - Japanese cultural area, mandalas are often designed with characters instead of images.

Use of the term mandala in western culture

Colloquially, mandala in western culture means different, center-aligned geometric, vegetable or figurative motifs, such as the mandala roof . Often the term is wrongly applied - because these are meditation pictures with a mandala-like structure - on round coloring pictures that are common in kindergartens and primary schools or in coloring books . Occasionally, patterns from objects that are found in nature, such as colored stones and plants (parts), are called mandalas. Among these, seasonal mandalas are particularly popular; B. autumn mandalas, which are usually made of colorful leaves or fruits.

Carl Gustav Jung uses mandalas as a psychological expression for the totality of the self.