The title of this article is ambiguous. Further meanings are listed under Krishna (disambiguation) .

Flute playing god Krishna ( venugopala ) at the Hoysala temple of Somanathapura , Karnataka ; in the peripheral zone gopis and cows

Krishna ( Sanskrit : कृष्ण, kṛṣṇa = "the black one" or "the dark one"; often called keshava or venugopala = "cowherd with a flute" in South India ) is a Hindu form of the divine and is usually revered as the eighth avatar of Vishnu . For his followers he is the incarnation of the Most High.

The scriptures describe Krishna's body tone as comparable to a fresh thundercloud. He always has a bansuri bamboo flute with him and a peacock feather in his hair. His heavenly abode is goloka . Although it is not considered historical in a scientific sense, most Hindus assume that it actually lived.

The Bhagavatapurana reports on the circumstances of his birth : Krishna belonged to the royal family of Mathura and was the eighth son of Princess Devaki and her husband Vasudeva , the son of a Yadava king. King Kamsa (also Kansa) of Mathura was Devaki's cousin; in order to get to the throne, he had his (step-) father, King Ugrasena , imprisoned. After the marriage of Devaki and Vasudeva, a voice prophesied that the couple's eighth son would kill him. Thereupon he keeps both prisoners in the palace dungeon and kills the first six children immediately after birth. The seventh can be saved after an apparent miscarriage. Krishna is born as the eighth child and in a passing vision the parents can see him in his cosmic form with four hands. Because of his miraculous powers, the guards fall asleep, the dungeon chains break and the doors pop open. Vasudeva escapes with the newborn child across the Yamuna River to the village of Gokul (near Vrindavan in the Braj region in today's Indian state of Uttar Pradesh ), where Krishna grows up with foster parents Yashoda and Nanda. So that the prophecy cannot come true, Kansa sends a demon to kill the newborn. But Krishna survived and grew up as a shepherd among cow herders. Therefore, the worship of the cow is particularly connected to its history .

Two of his siblings also survive, Balarama , who is born to Vasudeva's first wife Rohini , and the later-born daughter Subhadra. Balarama was closely associated with Krishna throughout childhood and in some traditions is considered the ninth avatar of Vishnu instead of Buddha . Together with Krishna's form as Jagannath , Balarama and Subhadra represent a very popular trinity, especially in eastern India ( Odisha ). 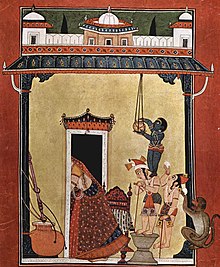 The stories from Krishna's childhood are a theme in the Bhagavatapurana; For example the sequences in which he and his friends steal the butter ( ghee ) that his foster mother or the neighbors made. (The butter was usually kept in a clay pot suspended from the ceiling. The boys formed a human pyramid and nibbled the butter out of the clay pot.) These scenes of his youth are varied in the performing arts and in Indian dance, such as the Bharatanatyam , shown.

An important part of the mythology and motive for spiritual parables are the games with the shepherd girls, the gopis : how he makes them in love and how they forget all their duties, how they forgive him for his pranks again and again. Krishna's companion, in the spiritual sense his Shakti (energy, power), is Radha . After initially sulking about his love affairs, which she has observed from afar, Krishna and Radha become a couple. The spiritual, but also erotic love between Krishna and Radha as well as the other shepherd girls is regarded by the Hindus as a symbol of God's love for man and the longing love for God ( Bhakti ).

A story tells how Krishna tells the cowherd women ( Gopis ) who bathe in the river, takes off their clothes and climbs a tree with the bundle. In order to get their clothes back, the shy ones have to appear naked in front of him one by one. Many of the episodes with the Gopis contain an erotic connotation; according to Bhagavatapurana, Krishna was a playful young cowherd ( Gopala = "cowherd" or Bala Gopala = "young cowherd"). According to another legend, he is said to have freed 16,108 kidnapped princesses from the clutches of a demon ( asura ) and married all of them. The stories from his childhood and youth in the Braj region are presented in the Ras lila dance theater .

The story of Krishna's confrontation with the serpentine river demon Kaliya is also worth mentioning in this context; it was and is still often depicted.

As an adult, he returned to the place of his birth, Mathura , in what is now the Indian state of Uttar Pradesh . He kills Kansa and returns the throne to the rightful King Ugrasena. The Mahabharata reports that he was king of Dwarka , now in the Indian state of Gujarat . After his peace missions had failed in the dispute between the dynasties of the Pandavas and the Kauravas over the rightful succession to the throne, he became the charioteer of Arjuna , the hero of the Pandavas, in a great war . To him he transmits the teachings of the Bhagavadgita . 36 years after the battle of Kurukshetra, the Yadavas, whose head is Krishna, slay each other during a drinking bout. Krishna himself is mistakenly wounded by a hunter's arrow in old age and dies after forgiving the unfortunate.

According to Hindu tradition, he returned in 3102 BC. Back to heaven, this point in time is considered to be the beginning of the dark age, the Kali-Yuga .

Lord Krishna and Arjuna on the chariot (stone sculpture in Tirumala )

One of the central text sources for the philosophical dimension of Krishna worship is the Bhagavadgita , which is part of the epic Mahabharata . In the battle of Kurukshetra , Krishna stands by Arjuna as a friend and protector as well as a spiritual guide . Before this battle begins, he reveals himself to Arjuna as the highest. As the prince and charioteer of Arjuna, Krishna goes with him into battle. Arjuna hesitates to fight as there are many relatives on the other side. Krishna teaches him about his duty, Dharma , to fight Kshatriya as a warrior and about the immortality of the soul Atman .

In addition, he also gives instructions for the spiritual and ethical life of his admirers, for example: Who is not ill-disposed towards any being and who has pity, who is free from egoism and selfishness, indifferent in suffering and joy and who is patient ... I love him ( 12th chapter).

The worship of Krishna also met with interest in the West: The International Society for Krishna Consciousness (colloquially: "Hare Krishna Movement"), founded by Abhay Charan Bhaktivedanta Swami Prabhupada , came to America in the 1960s.

Other names of Krishna

Krishna in the circle of the Gopis lifts up the mountain Govardhana protectively .

In the majority of medieval and modern figurative representations, Krishna is shown playing on a flute, standing and with crossed legs; in the edge zone of many sculptures there are much smaller cowherdesses ( gopis ) and resting cows. Medieval paintings have not been preserved; In modern painting, on the other hand, the representation of the god in the circle of gopis of equal size is predominant. The flute symbolizes the person who is only 'brought to life' through the breath of God. Other activities are less in the foreground - e.g. B. the raising of the mountain Govardhana to protect against storms , the dance or the cozy get-together with his companion Radha.

The highest holiday in honor of Krishna is Janmashtami , usually in August according to the lunar calendar, when the believers celebrate his birth. During the puja , the ritual worship service, the priest worships the divine child in a doll in a small bed, which the women have previously decorated over and over with flowers. Especially in Mathura , the place of his birth, residents and tens of thousands of pilgrims celebrate the festival with church services and stage plays that are broadcast on Indian television. The meaning for Hindus is comparable to the Christmas days for Christians in Bethlehem. Also Holi , the boisterous festival of colors, is closely associated with Krishna and the careless games of his youth.

Many researchers are of the opinion that the unusual facade of the 'Palace of the Winds' ( Hawa Mahal ) in Jaipur, which is slightly raised in the middle and provided with many ornamental cores ( jarokas ) and ornamental jugs ( kalashas ), symbolizes the crown of Krishna. The client of the building, Maharajah Sawai Pratap Singh, was in any case a worshiper of the god.