The title of this article is ambiguous. Further meanings are listed under Jaipur (disambiguation) .

Jaipur ( Hindi जयपुर Jayapur ) is the capital of the Indian state of Rajasthan with 3 million inhabitants (2011 census).

Jaipur is a fast growing industrial city with metal , textile , jewelry and chemical industries; mining and agriculture are practiced in their vicinity .

The city is a cultural center with a university , theaters , cinemas , museums , a zoo and art monuments. It is a traffic junction for roads , railways and airports . The walled city center was added to the UNESCO World Heritage List in 2019 .

The climate crisis has led to a drastic shortage of drinking water in large parts of India . This is particularly noticeable in Jaipur. The city is one of those 21 major Indian cities whose groundwater reserves will be completely depleted in 2020 according to calculations by the government agency NITI Aayog.

The city was founded on November 17, 1727 by Maharajah Jai Singh II. (1686-1743) as the new capital of the princely state of Jaipur and built according to the teachings of Shilpa Shastra . It is one of Rajasthan's younger cities. Jaipur is called "Pink City" because of the uniform pink color of the buildings in the old town. It was painted in 1876 in preparation for the visit of Crown Prince Albert Eduard, Prince of Wales . Pink is Rajasthan's traditional color of hospitality.

After India gained independence from Great Britain on August 15, 1947, the state of Jaipur merged with the princely states of Bikaner , Jodhpur and Jaisalmer in 1949 and the city of Jaipur became the capital of Rajasthan in 1956 . Today, the city is more prosperous than ever as the most progressive commercial and economic center. In 2008, around sixty people were killed in a serious terrorist attack on urban life in the city.

The pink-colored old town is partially surrounded by a city wall with battlements and city gates. Sights include the Iswari Minar Swarga Sal minaret near the Tripolia Gate , which Jai Singh's son Iswari had built.

Due to the special urban planning, which is a testimony to an exchange between the Hindu organization of the city quarters and western network-like street layout, the architecture and the craft and trade traditions that are still alive today, the old town was included in the list of World Heritage by UNESCO in 2019.

The Palace of the Winds, part of the City Palace in Jaipur 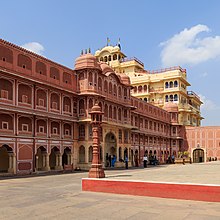 The most famous landmark of Jaipur is the Hawa Mahal ("Palace of the Winds") which tapers towards the top . It was built in 1799 by Maharajah Sawaj Pratap Singh . The conspicuous construction served the numerous ladies of the court, who were not allowed to go among the common people, as an observation post, especially during the popular processions. You could see, hear and smell everything from the street, but couldn't be noticed from the outside due to the darkening construction. The façade got its name because of the sophisticated air circulation, which always allowed a fresh breeze to flow through the rooms.

The city palace, built in 1890, is surrounded by high walls between gardens and courtyards in the middle of the city center and is open to the public as the “Maharajah Sawai Mansingh II Museum”. The following parts of the palace complex are part of the museum: Mubarak Mahal , Maharani's Palace , Diwan-i-Am and Diwan-i-Khas . Even today, descendants of the ruling family live in part of the palace and, on formal occasions, family members walk through the large Tripolia gate of the southern city wall in an elaborate procession.

Tourists at Jantar Mantar in Jaipur

The triangles, circles and pillars made of brick, covered with yellowish plaster, which form the observatory (" Jantar Mantar ") of the city founder and amateur astronomer Jai Singh II, are in the southern courtyard of the palace complex. A total of 18 instruments were erected between 1728 and 1734, including the 27 meter high sundial. Although the ruler was influenced by research by foreign astronomers and the advice of his teachers, including his mother, he designed many of these measuring instruments himself. They can be used to determine the position and movement of stars and planets , read the time and even make predictions about the intensity of the monsoons . This facility is a popular excursion destination and has been a UNESCO World Heritage Site since 2010 . Children and young people in particular are introduced to applied astronomy by their teachers and employed guides. The Jantar Mantar in Jaipur is the largest and best-preserved of the five such facilities built by Jai Singh II. The others are in Delhi , Varanasi and Ujjain ; the fifth in Mathura no longer exists today.

Jaipur as seen from Nahargarh Fort

As a defense and as a retreat for the women of the royal family, Sawai Jai Singh had the Nahargarh Fort built in the north of the city from 1734 . It was last expanded in 1868 and today characterizes the cityscape.

Amber , the old capital of the princely state of Jaipur, is only a few kilometers north of the center of Jaipur and is now also part of the urban area with the Amber Fort, built by Maharajah Man Singh from 1592 . The Amber Fort is of national tourist interest because of the comparatively well-preserved Rajput facilities.

The Jaigarh Fort, located right next to Amber Fort, is home to the largest movable cannon on wheels ever built, dating from 1720 .

In the south of the city, the green areas of the "Ram Niwas Park", named after Ram Singh (1816–1885), who ruled Jaipur from 1835 to 1880 and designed the plans for the park himself, extend over 145,000 m² . On the grounds of the park is the "Albert Hall", which was designed by the British architect Samuel Swinton Jacob (1841-1917). The building, which took several years to build from 1867, is a mix of styles of contemporary British models and Indian architecture in the Mughal style. It houses the "Central Museum", which, in addition to an Egyptian mummy, exhibits early Buddhist and Hindu sculptures, miniatures from Rajasthan, a collection of weapons, textiles and ceramics.

Exhibits in the museum

The Rambagh Palace , located just outside the city, was the residence of the last Maharajah of Jaipur and is now used as a premium-class hotel and operated by the Taj Group , just like the 250-year-old Jai Mahal Palace .

The NH 8, NH 11 and NH 12 highways cross in Jaipur. The National Highway 8 connects Jaipur with Delhi and Mumbai . Since 2005 the city has an international airport, Jaipur International Airport .

In 1947 the University of Rajasthan was opened in Jaipur.

Jaipur in the film