بنارس, Banāras [ bəˈnɑːrəs ]) or Kashi ( काशी ,کاشی, Kāśī [ ˈkɑːʃiː ]) is a city in the Indian state of Uttar Pradesh . It is located on the Ganges and has around 1.2 million inhabitants (2011 census). Varanasi is one of the oldest cities in India and is considered the holiest city of Hinduism .

Varanasi has been a Municipal Corporation ( Nagar Nigam ) since 1994 , a self-governing municipality of the highest category. The urban area extends over an area of ​​79.79 km². Varanasi is the seat of the district of the same name .

The city of Varanasi is known by several names. In addition to Varanasi , it is often referred to as Benares or Kashi . The name Varanasi ( वाराणसी Vārāṇasī ) already appears in the Hindu epic Mahabharata and the Buddhist Jataka stories. It is traditionally interpreted as a combination of Varana or Varuna (वरणा Varaṇā / वरुणा Varuṇā ) and Asi or Assi (असी Asī / अस्सी Assī ), the names of the two rivers that border the city. It is more likely, however, that the Varuna River, which in older literature was also known under the name Varanasi , gave the city its name. In Hindi, Varanasi is stressed on the third last syllable, but in English it is mostly on the penultimate syllable.

Benares or Banaras (बनारस Banāras ) is a popular variant of the Sanskrit name Varanasi . During the Muslim and British rule, Benares was the sole name of the city. After Indian independence, Varanasi was made the official form of the name, reflecting the classic Hindu tradition . Colloquially, however , Benares is still widespread.

Kashi (काशी Kāśī ) is the oldest name of Varanasi. It first referred to the tribal kingdom of Kashi, later its capital. Kashi is mostly derived from the Sanskrit root kash (काश् kāś ) for "to shine" and therefore means something like "the shining one" or "city of light". Today Kashi is mostly used in a religious context: Kashi describes the city of Varanasi in its capacity as a sacred place. In Hindu mythology, Varanasi also has many other epithets such as Avimukta ("the one never left by Shiva"), Anandavana ("forest of bliss") or Mahashmashana ("great place of cremation").

Varanasi is located in northern India, 780 kilometers east of the Indian capital Delhi, mainly on the left bank of the Ganges , India's largest river. The city belongs to the state of Uttar Pradesh and is located in its eastern part. The municipality ( municipality ) Varanasi covers an area of 79.79 square kilometers. Varanasi is the administrative seat of the Varanasi district , which includes the city and a total of 1,578 square kilometers in the surrounding area. In the immediate vicinity of Varanasi are the Buddhist pilgrimage site Sarnath (thirteen kilometers north), the former maharaja's residence Ramnagar on the opposite side of the Ganga and the Mughalsarai railway junction ten kilometers east of Varanasi.

The urban area of ​​Varanasis extends along the river on the western side of the Ganges. At the point of Varanasi the Ganges makes a bend and flows in a large arc towards the northeast. Due to its location on the steep high bank on the western side of the river, the city is protected from the annual floods of the Ganges. On the other hand, the flat eastern bank, which is regularly flooded, is completely undeveloped. The urban area of ​​Varanasi is bounded by two rivers that flow into the Ganges here: Varuna in the north and Assi in the south. 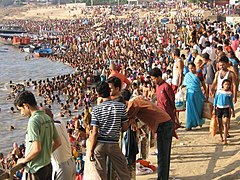 Crowds at the ghats

According to the 2011 Indian census, Varanasi has 1,201,815 inhabitants. This makes Varanasi the sixth largest city in Uttar Pradesh after Lucknow , Kanpur , Ghaziabad , Agra and Meerut . The population development in Varanasi, as in most Indian cities, is increasing: Compared to the last census in 2001, the population had increased by nine percent. In agglomeration Varanasi, which extends out beyond the boundaries of administrative metropolitan area, 1,435,113 people live according to the census.

The majority of Varanasi's residents are Hindus . There is also a larger Muslim minority. According to the 2011 Indian census, 70 percent of the population of Varanasis are Hindus and 29 percent Muslim. Other religions hardly play a role demographically, but Varanasi is the seat of the Varanasi diocese of the Roman Catholic Church .

Because of its religious significance, Varanasi has long since attracted Hindus from other parts of South Asia, many of whom have settled in the city. In Varanasi there are larger communities of ethnic groups such as Bengal , Tamil , Nepalese and others who live in their own neighborhoods and have built temples in the style of their home regions. 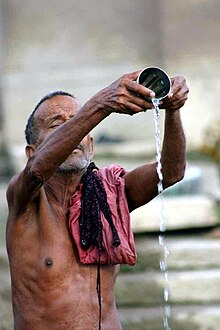 Prayer in the Ganges

Varanasi is considered the city of the god Shiva Vishwanath ("Lord of All") and one of the holiest places of Hinduism. For more than 2,500 years, believers have made pilgrimages to the city, which is also a center of traditional Hindu culture and science.

It is particularly worthwhile for strict Hindus to bathe in Varanasi in the Ganges, and to die there and be burned. Kilometers of step-like bank fortifications stretch along the river, the ghats , on which the believers bathe in the water of the river that is sacred to them and a few meters further the corpses of the deceased are cremated. The ashes are then sprinkled into the water. A bath in the Ganges is said to cleanse of sin . According to Hindu mythology, dying and being burned in Varanasi is the breakout of the constant cycle of rebirth .

Ten kilometers north of Varanasi is Sarnath , the place where Buddha is said to have preached the first sermon after he found enlightenment in Bodhgaya (Bihar) . This sermon is also known as the Deer Sermon because it took place in the Deer Park of Sarnath. Buddha Shakyamuni is believed by some Hindus to be the incarnation of Vishnu . King Ashoka later made Sarnath a Buddhist place of pilgrimage and, according to legend, had a total of 84,000 stupas and numerous monasteries built there and throughout his empire .

The Banaras Hindu University (BHU), founded in 1916, is also based in Varanasi . A particular aim of the BHU is the study and promotion of Hindu Shastras and Sanskrit literature . In 2012, the BHU was ranked second in a list of the 50 best universities in India. 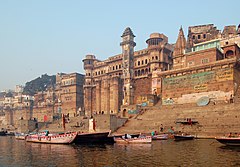 Munshi Ghat on the Ganges in Varanasi

In addition to the Ganga Ghats mentioned, the roughly one hundred stepped bathing and cremation places, Varanasi has about 200 important Hindu, Jain and Buddhist temples. To many of them, however, non-Hindus are not allowed.

The main language in Varanasi is Hindi , India's national language and the most widely spoken language in the country. Urdu , the Muslim variant of Hindi, is also widespread among Muslims . In Varanasi there is a diglossy situation between the standard Hindi and the dialect used by most of the residents as a colloquial language. This is called Banarsi Boli and from a linguistic point of view belongs to Bhojpuri , a regional language spoken in eastern Uttar Pradesh and in the neighboring state of Bihar . The speakers identify themselves as Hindi speakers and see Banarsi Boli as a dialect of Hindi. 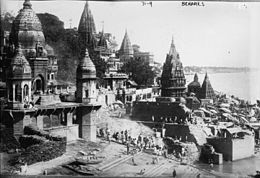 Varanasi is said to have been around 1,200 BC. By Kashya, the son of Suhottra. In 1193 the city was taken by Qutb-ud-Din Aibak , the general of the Ghurids . He made himself independent from the Ghurids and founded the Sultanate of Delhi . For the next 500 years, Varanasi was under Muslim rule. During this time, many Hindus converted to Islam. During the reign of Akbar I at the turn of the 17th century, the city was ruled by a Hindu governor who built several temples and an observatory. However, these structures have not been preserved. Shah Jahan installed his son Dara Shukoh as governor in Varanasi. He maintained close relationships with Hindu scholars and studied their teachings. Aurangzeb , who pursued a policy of Islamization at the end of the 17th century, closed the schools of Muslim scholars studying Hindu teachings in the city , had a Hindu temple demolished in order to build a mosque in its place, and renamed the city in Muhammadābād around. However, this name has not caught on. After his death in 1739 Balwant Singh, the son of a Hindu Zamindar, was raised to Raja of Varanasi. He worked with the British East India Company and became more and more dependent on it. In 1775 its territory came under British administration, but Balwant Singh's family retained the Raja title. In 1950 the area became part of the state of Uttar Pradesh . The royal family still exists today.

On January 19, 1977, a serious railway accident occurred near Varanasi when a passenger train hit a stopping train. 28 people died and another 78 were injured.