This article was due to content flaws on the quality assurance side of Geosciences portal entered. This is done to increase the quality of the articles in the geosciences topic. Please help to correct the deficiencies or take part in the discussion .  ( + )
Reason: Quite confusing and unclear article, much too one-sidedly focused on Central Europe, no clear definition and description of the origin, poor illustration, no sources. See also the comments on the discussion page .-- Jo 21:14, 11 Mar. 2010 (CET)

River terraces are remnants of former valley floors that remain on the slope after the river has deepened the valley further. They arise from sedimentation of fluviatil transported rock material due to the decreasing transport force of the river in the course of the river. River terraces can be developed on both or just one side of the valley. Through tectonic movements and by increasing the transport capacity of a river, the river can cut into a previously formed terrace and form characteristic terrace stairs. River terraces have been preferred settlement areas along both large and small rivers since the Neolithic . They are close to the fertile floodplains and at the same time are protected against flooding .

Formation of a river terrace staircase

After a phase of bottom formation, the recent river can deepen again and destroy parts of the old valley floor. In narrow valleys with a high discharge, the valley floor can be completely removed, but mostly remains are preserved. Meandering rivers are usually characterized by the fact that older remains of the valley floor have been removed in the area of ​​the impact slope, while they have been preserved on the Gleithang. Rivers with predominant linear erosion are often characterized by terraces formed on both sides. The river meanders between the high banks and, depending on the width of the valley floor, forms an extensive lowland , the floodplain .

In Central Europe , terrace development began widespread in the Tertiary . The terrace bodies and terrace sediments of the tertiary terraces are mostly missing today. They are usually indicated by leveling areas; only in subsidence areas are there still tertiary river gravel, e.g. B. received the Kieseloolithe in the Lower Rhine Bay. The terrace development intensified in the Pleistocene and Holocene, alternating between cold and warm periods . Due to the multiple alternation of deposits and incisions, combined with tectonic movements, whole stairs of river terraces were created. The oldest, extensive river terrace is known in Central Europe as the upper or main terrace , although older, tertiary terraces can also be found in many river areas. Later, after further cutting into the rivers and partial removal of the main and upper terrace, the middle terrace and finally the lower terrace were created . In many cases, the terrace bodies can be subdivided several times.

The fluvial river regime is subject to major changes , especially when changing from glacial to interglacial periods . The flow behavior of a stream varies depending on the air ( precipitation , melting amount of water ), sea level , and Dip. The gradient is particularly influenced by tectonic processes (uplifts and subsidence) in part of the river. The grain size of the deposited terrace sediments depends on the flow velocity and the gradient of the river. Coarser sediments are found in the upper reaches of a river system, while sands and silts are common near the mouth . 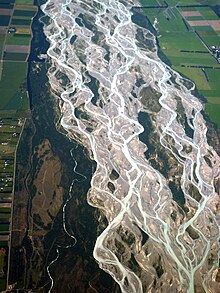 Gravel in a branched river system

Erosion in an older terrace

The widespread assumption that it eroded during warm periods and accumulated during cold periods has been scientifically refuted. It is also not permitted to draw conclusions from the number of terraces about the number of glacials. In coastal areas, for example, a reversal of the runoff behavior can be observed, since in cold periods the sea level has dropped significantly and erosive processes dominate, while in interglacial periods, due to the rise in sea level, sedimentation can take place in the lower reaches of a river.

Regardless of the numerous influencing factors on the runoff regime - temperature , precipitation, vegetation and sea level height - various regularities can be recognized in the alternation of glacial and interglacial periods.

Early glacial
Associated with the drop in temperatures, the vegetation gradually declines. The result is less precipitation and a drop in sea level (part of the water is now bound as ice). As a result, a meandering, overgrown river system forms with pronounced lateral and deep erosion. The gravel of the terrace body takes place.
Highly glacial
In the high glacial period, i.e. at the height of the Ice Age, most of the water is bound in the form of ice due to the low temperatures, and the sea level has reached its lowest point. There is hardly any vegetation. Surface runoff occurs only to a small extent - mostly during the short thawing periods in summer. The result is that there is hardly any erosion and sedimentation in the fluvial milieu. Shift gaps and discordances often occur here in the profile .
Late glacial
Combined with a global rise in temperature and the lack of replenishment of the ice on the glaciers, the glaciers are melting and the sea level is gradually rising. The process is reinforced by the decrease in the albedo . Triggered by a still lower sea level and higher surface runoff , a river system forms again, which is initially characterized by more or less pronounced lateral and deep erosion. This stage is characterized by the predominance of linear erosion.
Interglacial
Due to global warming, the vegetation is spreading again quickly, the precipitation increases and the sea level is gradually rising again. As a result of the climate change, a meandering river system forms in which sediments are deposited so that oxbow branches of the river can sometimes be backfilled .

Influence of tectonic movements on the river profile

If no tectonic movements take place in the catchment area of ​​the river during its formation, a compensatory profile forms from the mouth to the source. If tectonic movements take place, the river rules with increased erosion or accumulation: a new compensatory profile is formed. In nature, this process usually occurs in several phases. When the terrain in the upper reaches is raised, increased erosion sets in in the upper and middle reaches until a new compensation profile is formed. The sedimentation process in the lower reaches of a river is mostly determined by sea level fluctuations. If the sea level falls (e.g. in high glacial periods), there is increased erosion in the river bed , which is receding from the coastline . If the sea level rises, however, this leads to increased sedimentation in the lower reaches of a river, combined with silting up and silting up of the river bed.

If a river flows from an uplift area into a tectonic subsidence area, in which the accumulation dominates, it comes to terrace crossings , i. H. in the subsidence area older terraces are below younger terraces, while it is exactly the opposite in the uplift area. A typical example of such a change in position is the Rhine at the transition from the rising Rhenish Slate Mountains to the sinking Lower Rhine Bay .

This example illustrates why the elevations of river terraces (morphostratigraphy) can only be used to a limited extent for the stratigraphic correlation. In most cases, reliable stratigraphic statements can only be made through a complex analysis of the heavy mineral spectrum .

Terraces can be designed as embankment or gravel terraces as well as rock bed or erosion terraces.

In mountainous countries , in addition to the river terraces, there are a number of other terrace shapes, many of which also go back to the Ice Ages. Such forms include the valley shoulders of U-shaped or trough valleys and some types of moraines . 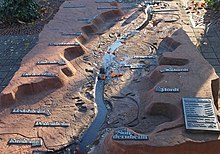 The temporal classification is still questionable due to the tectonic events in the Vienna area and the lack of dating possibilities for fluvial sediments in the time frame of the Quaternary.

The Oberrheingraben is not a valley in the traditional sense, but a rift valley that has been refilled with sediments. The Rhine dug itself into this and thus formed the Rhine floodplains.

The river terrace created during the last Ice Age is called the Niederterrasse in the Rhine region (the terrain between the Holocene river bed and the Niederterrasse is regionally also known as the Hochgestade ). On the Lower Rhine, the high banks to the older middle terrace and partly to the upper terrace can also be seen. The older the terraces, the finer and harder the sands are that are found there and partially mined.

The place name high bank was already used in Roman times. The Latin name alta ripa is used in Altrip and in Tolna Castle near the Danube.