The Wienerberg (spelling of the Austrian map: Wiener Berg ) is 244  m above sea level. A. mountain ridge located on the southern edge of Vienna . The area is part of the most populous municipality, Favoriten , and since an urban planning ideas competition in the 1980s, the Wienerberg recreation area has been located here with a total area of ​​117  hectares , 90 hectares of which are protected and 16 hectares are water. The protected part has a diverse flora and fauna, including some of the species on the Red List , such as the great fire butterfly and the European pond turtle .

Together with the Laaer Berg  ( 251  m above sea level ) and the Boschberg in between, the Wienerberg forms the furthest projection of the Vienna Woods into the Vienna Basin and belongs to the terraced landscape on the edge of the basin. The range of hills lies between the valley of the Vienna (to the Danube Canal ) and the Danube in the north, and the lowlands of the Liesing (to the Schwechat ) in the south.

The Wienerberg is bounded in the south by the A23 motorway , in the east by the Wienerfeld-Siedlung, in the north by the housing estate along Raxstrasse and Wienerbergstrasse and in the west by Eibesbrunnergasse , which forms the border between the 10th Viennese district of Favoriten and the 12th district. Viennese district Meidling forms.

The landmarks of the Wienerberg, visible from afar, are the spinner on the cross and the old water tower Favoriten . Recently, the high-rise towers designed by the architect Massimiliano Fuksas , the Vienna Twin Tower, were added. They are part of the new business and residential district known as Wienerberg City , which also includes the other high-rise buildings, the Delugan-Meissl-Tower , the Coop-Himmelb (l) au-Tower and the Monte Verde by architect Albert Wimmer . The Delugan-Meissl-Tower is named after the Viennese architectural office Delugan Meissl .

Brick factory on Wienerberg around 1815

Wienerberg towards the south

Already in Roman times clay deposits were discovered in today's area of ​​the Wienerberg and used for brick production. In 1775 Maria Theresa had the first state brick factory built in this area, which in 1820 became the largest in Europe. The Wienerberger brickworks, which is now active worldwide, was also founded here in 1819. This gives the fact that the Viennese architecture of this time was strongly influenced by brick buildings, recognizable by magnificent buildings such as the main customs office or the Vienna arsenal , but also workers' houses and social facilities were built with bricks from Wienerberg. From 1870 onwards, brick production there went hand in hand with a rapidly increasing exploitation of the workforce, which also included children. The many workers who immigrated from the crown lands were called Ziegelbehm ( Ziegelböhm ).

In the area of ​​the spinner on the cross were the two places of execution on Wienerberg .

From 1826 to around 1900, the adjustment points for the old university observatory , the meridian columns on Wienerberg , stood on the ridge of the Wienerberg in the area of ​​today's Favoritner Gewerbering .

In the 1960s, clay mining became unprofitable and the brickworks were shut down. What remained was fallow land and the small lakes typical of the Wienerberg , which were left behind by the former clay pits , and the brick manufacturer Wienerberger , which had long been active elsewhere and emerged from the imperial brickworks. From now on the area was owned by the City of Vienna and was used to deposit debris.

At the end of the 1970s, an urban design ideas competition was held. This formed the prelude to the design of today's near-natural recreation area according to plans by the landscape architect Wilfried Kirchner. In 1995 it was declared a protected part of the landscape .

In 1999, the construction of Wienerberg City, an arrangement of numerous residential and office high-rise buildings around a newly designed lake (former clay pit) and park, began. The Vienna Twin Tower was the first of these buildings to be completed in 2001 .

There is a 14 km long network of paths, several small ponds and the larger Wienerberg pond, playgrounds, a streetball field, several soccer fields, a beach volleyball field and bike paths. The Wienerberg pond is used as a natural bathing area when the temperatures are appropriate and, according to studies by the City of Vienna, also has sufficient water quality, but is currently not officially dedicated as such. 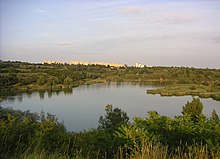 View over the water surface of the Wienerberg to the east

The brick works on Wiener Berg around 1900 (bottom right)