Residential building ( tighremt ) made of rammed earth in Aït-Ben-Haddou , Morocco

Earth building refers to the erection of structures made of clay and the resulting structures themselves. Various load-bearing and non-load-bearing construction methods are used. Load-bearing walls are mainly made of rammed earth , adobe bricks or as a timber framework with partitions made of clay. Light clay with different aggregates has a lower bulk density and compressive strength than clay.

Clay as a building material 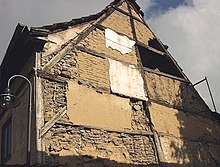 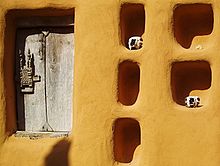 The clay used for building is a mixture of clay , silt (fine sand) and sand , which is brought into shape when wet and then dried. If the clay contains too much sand (it is too lean ) it becomes crumbly, too much clay (it is too fat ) causes it to crack. In many areas straw is added to the clay ; this is not absolutely necessary, but results in a lower density of the resulting material and thus better thermal insulation properties . In addition, the straw acts as reinforcement against the formation of cracks.

In some cases, cow dung or horse manure is also mixed in. The second contains - because the horse is not a ruminant, i.e. the cellulose is not broken down - a high proportion of non-rotting fibers . In addition, the organic components of the manure enter into complex compounds with the mineral clay components, which significantly improve the technical properties. An addition of lime in this case acts as a disinfectant medium, the neutralized acids to salts - this increases the water retention capacity - and closes on the surface of the celluloses, so that they are better anchored in the clay.

Today one can speak of a renaissance of earth building. Often the clay could be extracted from the ground directly at the construction site . In most of the villages there are still old loam pits from which the loam used to be extracted. Companies that are dependent on economic work use the finished products available today. The clay is delivered dry and finely ground in sacks and can be processed like cement with a free-fall mixer . Modern building floors contain various other fibrous materials, storage and swelling materials that control the deformation through the material moisture, as well as, as thermal clay , heat-insulating and heat-storing materials.

The climate in clay buildings is pleasant, as the clay has a high heat storage capacity and thus has a temperature equalizing effect. The humidity is also stabilized, as clay stores moisture and slowly absorbs or releases it.

Compared to cement, clay has some very positive properties that make it interesting for ecological building.

In this way, clay creates a pleasant and healthy indoor climate for people . In summer, when it's very hot outside, the rooms in a mud house are pleasantly cool. In winter, the clay regulates the humidity and protects against dry room air. In the case of clay, care must be taken to ensure that it is offered free of charge. Nowadays, clay plasters are provided with adhesives to simplify processing. This significantly limits the positive properties of the clay. Only unmodified, pure clay plasters can pass on the properties without restriction.

Clay building can both commissioned on wooden basic structures, but because of the higher pressure rating, especially with dried brick or rammed earth construction are performed. In general, the walls of adobe buildings are massive. For walling with bricks, the same material is used as mortar and plastering as for making the bricks. In Upper Egypt and northern Sudan known Nubian vault of mud bricks can be built without formwork with a movable supporting feed. When building rammed earth, a mostly wooden frame is required.

In most timbered houses clay is either walled or in the form of mud bricks by means of clay mortar at infill as adhesive moist mixture with chopped straw o. Ä. Fibrous material (also Weller called) on a wicker applied or wood Taken ( Klaiben ). There is also the rammed earth construction method, also known as the Pisee or Pisé construction method . Here an earth-moist clay mixture is poured into formwork and compacted (example: the Chapel of Reconciliation in Berlin). With the clay corrugated construction method formerly widespread in Thuringia and Saxony , the clay mixture is piled directly against the wall without the formwork.

Wooden beams are built into clay walls in order to receive door or window frames or to be able to attach something to them, e.g. B. Wall cabinets. Mud houses are usually boarded with wood on the outside to protect them against moisture. Cement-containing mortar has a different expansion behavior with temperature changes than clay and is therefore unsuitable as a facade plaster. Exterior plasters for clay walls contain brick dust, lime and, at most, a minimal amount of cement. Lately, industrially manufactured clay blocks of various formats, clay wall panels, some with tongue and groove , and clay plaster for interior construction have become available in Europe .

Due to the high specific heat capacity , clay walls are able to compensate for temperature differences. In warm regions, thick walls ensure a pleasant indoor climate. Clay is a good conductor of heat. By adding insulating materials such as B. cork grist, perlite , vermiculite or expanded clay , the thermal conductivity can be reduced (light clay). In colder regions, thermal insulation should be attached to the outer wall as usual.

The shape of the clay brick can be corrected by wetting it. By capillary action, clay bricks draw water from standing moisture. An earth building is quickly damaged by water, but superficial moisture does not cause any damage. Therefore, it is necessary in wet (humid) climates, to protect the outer walls by appropriate formwork made of wood or corresponding roof overhangs and for drainage to take care of the surrounding terrain. Clay walls should always have a layer of stone above the ground with a separating layer on top so that moisture cannot be drawn from the ground.

In dry (arid) climates, clay buildings are very durable. Earth building is traditionally common in peasant societies without industrial transport. To this day, clay buildings are common in the Middle East, north and south of the Sahara, in Spain ( Mudéjares architecture), among the pueblo- building Indians of North America and in the Andes .

If the clay has been strongly compressed during the drying process, normal plastic anchors (not too small in diameter) can be used.

Light objects such as pictures and bathroom cabinets can be attached simply by driving in nails and screwing in chipboard or drywall screws with a coarse thread (without pre-drilling). If necessary, a perforated plate with several screws should first be attached, which supports the actually load-bearing screw. As an alternative, special dowels for use in clay, aerated concrete and plasterboard are suitable to increase the load capacity . To carry larger loads, the dowels must be anchored in the subsurface. A wooden board can be placed on the wall surface or embedded in the wall to distribute the compressive stress that occurs.

Aït-Ben-Haddou with the dried up river valley of the Asif Mellah - the two gates to be seen at the bottom right in the foreground as well as the adjacent walls were built as a film set (wood, styrofoam, synthetic resin) in order to enhance the effect of the self-contained cityscape out to step up.

Launched by the UNESCO crowned World Heritage Shibam on a trough protrusion in Wadi Hadhramaut in southern Yemen is up to nine-story high-rises even referred to as "Chicago of the desert" because of it. The old city covers an area of ​​250 × 350 meters and is famous for its multi-storey houses made of adobe bricks. Many of the buildings are up to 25 meters high and are up to 500 years old. The stability of the houses is ensured, among other things, by consistently reducing the wall thickness upwards, as well as by a rigid modular system of wall and window axes and a system of wooden columns and wooden ceilings that interlock the clay walls. The clay surfaces must be renewed regularly. The roofs and sensitive components are protected by lime plaster, which only needs to be renewed every 25 years. The mountain oasis settlement of Aït-Ben-Haddou in Morocco is also recognized as a World Heritage Site.