The Pleistocene ( ancient Greek πλεῖστος pleistos "most" and καινός kainos "new") is a period in the history of the earth . It began about 2,588,000 years ago and ended about 11,700 years ago ( BP ) with the beginning of the Holocene - series , of the present time. Thus the Pleistocene lasted about 2.5 million years.

Until the 19th century, the Pleistocene was referred to as Diluvium with reference to the Flood ( Latin diluere , washing away = flood ). This term and the associated adjective diluvial were still used by geologists in the 20th century - without reference to the myth of the Flood.

During long periods of the Pleistocene, the climate was significantly colder than it is today. Illustration of a late Pleistocene landscape in northern Spain

At the beginning of the 19th century one had learned to clearly differentiate the chaotic deposits in Northern Europe, Northwest Europe and in the Alpine region from the layers below, but the interpretations of these Ice Age sediments were shaped by biblical views.

It was only after the Ice Age theory prevailed that the most recent deposits were assigned to the Quaternary and subdivided into the Diluvium and the Alluvium. These terms were later replaced by the Pleistocene and Holocene, with the result that the Pleistocene largely ends with the Holocene to this day, although this is part of the interglacial period.

The Quaternary was reintroduced as an intermediate term in 2005 and now encompasses the entire Holocene and Pleistocene (including the Gelasian as a former younger section of the Pliocene).

Definition according to ICS

The last two glacial periods in the Pleistocene: Weichsel / Würm complex and Saale / Riss complex. The glacier advances were interrupted by warmer periods during which the archaic people of Europe (the Neanderthals as the successor to Homo heidelbergensis ) spread beyond the permafrost limit to the north and northeast. From around 40,000 BC. The modern Cro-Magnon humans colonized these areas.

According to the definition of the International Commission on Stratigraphy , the Pleistocene begins magnetostratigraphically with the base of the polarity chronozone C2r (Matuyama). Biostratigraphically , it begins with the extinction of the coccolithophores Discoaster pentaradiatus and Discoaster surculus . The lower limit of the Pleistocene is also within Marine Isotope Stage 103. The reference profile ( GSSP ) is on Monte San Nicola , near the town of Gela , Sicily , Italy .

The woolly mammoth is a characteristic species of the Pleistocene

Geographically, a distinction is made between:

The development of culture and the spread of man today also fell into the Young Pleistocene . The first works of art are known from the Middle Paleolithic (around 80,000 years ago).

If it was previously assumed that homotherium disappeared in Europe in the Middle Pleistocene, new finds show that the saber-toothed cat was present in northwestern Europe, similar to America, up to the end of the epoch

Typical for the early Pleistocene in Eurasia was the first appearance of voles ( Allophaiomys pliocaenicus ) with constantly growing, rootless molars. The success of these voles is also due to the cooling of the climate and the associated spread of large open landscapes in the Pleistocene. Together with the voles, other species that were characteristic of the beginning Pleistocene spread. Some large ungulates were particularly noticeable, such as Soergelia , Praeovibos, the ancestor of the musk ox, the giant deer Megaloceros and the first bison . At the beginning of the epoch there were still numerous genera that already existed in the Pliocene, but soon disappeared. One of them was the deer Eucladoceros , which was replaced by the giant deer, another was Leptobos, a large horn-bearer that was replaced by bison and ancestral aurochs. The saber-toothed cats Megantereon and Homotherium as well as the hyena Pachycrocuta were already common in the Pliocene. While Megantereon and Pachycrocuta became extinct in the Middle Pleistocene, Homotherium seems to have survived in Europe until the end of the epoch. Dogs of the genus Canis and horses of the genus Equus as well as the first panther cats ( Panthera ) and mammoths ( Mammuthus ) existed at least since the late Pliocene. The Eurasian puma ( Puma pardoides ) has also been widespread in Eurasia for at least 2.1 million years. In the early Pleistocene, moose ( Prealces, Alces ), which presumably emerged from the genus Libralces , and the reindeer ( Rangifer ) appeared for the first time. In addition, various pigs ( Sivachoerus, Hippohyus, Tetraconodon ) were widespread in Eurasia in the early Pleistocene, in addition to today's genera . Also in the early Pleistocene, the giant Trogontherium beaver occurred. Among the primates of South Asia, the giant monkey Gigantopithecus stands out alongside today's forms such as macaques, slender monkeys ( Presbytis ), gibbons ( Hylobates ) and orangutans ( Pongo ) . Orangutans were much more common in the Pleistocene than they are today. Their fossil remains can be found from Java to southern China. In Europe primates were distributed among other things by macaques ( Macaca ). At the beginning of the early Pleistocene, hominids first appeared on the edges of Europe. In Dmanissi, in present-day Georgia, remains of prehistoric humans of the genus Homo , which are around 1.8 million years old, have been found.

Among the martens in the Pleistocene, in addition to the current genera, there were also some more, including baranogals and oxyvormela as bandiltissas and the Grisons Pannonictis and Enhydrictis . Agriotheria were also widespread among the bears in the early Pleistocene . Black bears were widespread with Ursus thibetanus mediterraneus in warm periods as far as southern and central Europe. The polar bear, on the other hand, first appeared as a very young species in the Young Pleistocene.

Many of today's forms were much more common in the Pleistocene. The bamboo bear was very common in East Asia. Raccoon dogs and red dogs ( Cuon ) reached Europe, whereas today they are limited to Asia. The African warthogs Metridichoerus and Phaccochoerus were temporarily widespread in the Middle East. Hippopotamus ( Hippopotamus ), water buffalo ( Bubalus ), fallow deer ( Dama ), musk ox ( Ovibos ), reindeer ( Rangifer ), saiga antelope ( Saiga ), thare ( Hemitragus ), lions and leopards were very widespread at times and even reached Central Europe. Hippopotamuses of the genus Hippopotamus lived on Mediterranean islands, in Southeast Asia there were hippopotamuses of the genus Hexaprotodon . Camels ( Paracamelus, Camelus ) were common as far as Eastern Europe. The early bison were distributed in the Old Pleistocene through Bos schoetensacki in the forests and Bos priscus in the steppes. Today's forest wisent ( Bos bonasus ) did not appear until the Upper Pleistocene. The tapirs disappeared from Europe in the early Pleistocene, the chalicotheria from Asia and Africa and thus for good. In addition to today's genera ( Rhinoceros, Dicerorhinus ), rhinos are represented by woolly rhinos ( Coelodonta ) and the genus Stephanorhinus until the late Pleistocene . The Elasmotherien survived at least until the Middle Pleistocene. The mammoths ( Mammuthus ) developed from the southern elephant via the steppe mammoth to the woolly mammoth, while the mammoths and primitive elephant relatives with mammoth and anancus disappeared from Eurasia in the early Pleistocene. In addition to today's Asian elephants of the genus Elephas , trunk animals of the genera Stegodon and Palaeoloxodon were also common in the Pleistocene of Eurasia .

At the end of the Pleistocene, numerous Eurasian large animal species disappeared in the wake of the worldwide Quaternary extinction . The forest rhinoceros and the European forest elephant were among the first species to disappear, and the woolly rhinoceros and the giant deer were among the last . The cave bear died out a little earlier. The woolly mammoth survived into the Holocene, at least in some areas .

New for the Pleistocene of Africa are horses of the genus Equus , which replaced the last hipparions of the Pliocene ( Eurygnatohyippus ) at the beginning of the epoch . In addition to numerous genera that are still widespread on the African continent today, at the beginning of the Pleistocene there were also Dinotheria ( Deinotherium ), Chalicotherium ( Ancylotherium ), saber-toothed cats ( Megantereon , Homotherium ), Metailurine cats ( Dinofelis ), and large hyrax ( Gigantohyrax ) , and cattle giraffes ( Sivatherium ). These relics from the Pliocene all died out in the early Pleistocene. In addition to elephants of the genus Loxodonta , which also includes today's African elephants, there was also the genus Elephas , which is now restricted to Asia, in the Pleistocene of Africa . The mammoths ( Mammuthus ), on the other hand, had apparently already disappeared and instead produced a greater abundance of forms in Eurasia and North America. Pleistocene genera that no longer occur today also include cattle of the genus Pelorovis , giant hartebeest ( Megalotragus ), antelopes ( Parmularius ), waterbuck ( Menelikia ), large warthogs ( Metridichoerus , Notochoerus ) and primates ( Dinopithecus ). Some forms such as the white rhinoceros and the jelada, which in historical times were limited to relatively small areas, became much more widespread in the Pleistocene. North of the Sahara, woolly rhinos, giant deer, aurochs, wild ass, fallow deer and red deer also appeared. In the Pleistocene, camels of the genus Camelus reached at least East Africa from the north. 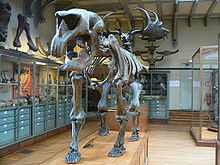 Skeleton of a Diprotodon , in the background a Eurasian giant deer

Also, Australia was home to a rich fauna large animal in the Pleistocene. These included large herbivores such as Diprotodon , the Beuteltapir palorchestes and various large sthenurinae ( procoptodon ) as well as thylacoleonidae , giant potoroidae ( propleopus ) Riesenwarane Megalania , soil crocodiles ( quinkana ) and Thunderbirds genyornis . Around 50,000 years ago, humans ( Homo sapiens ) also reached the remote continent for the first time . Most of these large animal genera are likely to have become extinct around this time.

North and South America have been linked by a land bridge since the Pliocene . Throughout the entire Pleistocene, the American double continent was home to fauna that, in addition to today's species or their predecessors, also featured a large number of conspicuous large animal species. These included North American mammoths , Mammutiden , camels , helmet muskox , Busch oxen , American lions , Direwölfe . Toxodonts , Macrauchenia and Gomphotheria lived in South America . Saber-toothed cats , giant sloths and giant armadillos ( Glyptodon ) were represented on both continents . At the end of the Pleistocene, during a tight timeframe (around 12,000 years ago), all of these species disappeared. Today's fauna is essentially represented by the survivors of this mass extinction. It was around this time that humans first appeared in America.