The subfamily of saber-toothed cats (Machairodontinae) is an extinct line of cats . They belong to the carnivores (Carnivora), an order of mammals (Mammalia). It is assumed that the predators split into the two predator superfamilies , the feline (Feliformia) and the canine (Caniformia), as early as the early Paleocene . The oldest group of the former has been the extinct family Viverravidae , which has been recorded as early as the Paleocene. One of the oldest families from the cat branch are the Nimravidae , which are very reminiscent of cats (Felidae), but are viewed as a separate family. They first appeared in the late Eocene of North America and Eurasia . Another family, the Barbourofelidae , were originally considered a subfamily of the Nimravidae, but are now considered a family of their own. The Barbourofelidae did not become extinct until the late Miocene with the North American genus Barbourofelis . Occasionally some species of the Nimravidae and Barbourofelidae are also referred to as saber-tooth cats, although these are neither real cats nor real saber-tooth cats and are therefore considered pseudo- saber-tooth cats .

The actual branch of the true saber-toothed cats is known as the subfamily of the Machairodontinae.

Saber-toothed cats got their name because of the extremely long curved canine teeth, which could be up to 28 cm long in the largest species. The animals were able to tear open their lower jaws at a 95-degree angle, which was also necessary in order to be able to fully insert their long teeth. Today's cats can only open their jaws 65 to 70 degrees . In habit they resembled today's cats, although most of the shapes were more compact and therefore less elegant than the species we are familiar with. Many had a relatively short tail , as we know it from today's lynx ( Lynx lynx ). 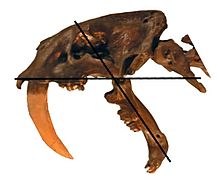 Skull specimen of a Smilodon fatalis with maximum jaw opening (128 °) 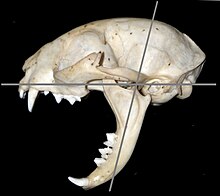 To compare the skull of a house cat (Felis silvestris f. Catus) with a maximum jaw opening of 80 °

A popular belief is that saber-tooth cats were consistently very large. In fact, some were relatively small, some smaller than leopards . Among the smallest forms were representatives of the genus Paramachairodus , which reached a shoulder height of about 60 cm. The largest species of the genera Smilodon , Machairodus and Homotherium were roughly the size of today's lion . One of the largest species was the South American saber-toothed tiger Smilodon populator ; he reached a shoulder height of about 1.2 meters. Machairodus giganteus and large forms of the genus Homotherium were similar in size or even slightly larger, but less bulky .

The saber-toothed cats were originally divided into three tribes . One of them, the tribe of the Metailurini, to which in addition to lesser known forms such as Metailurus and Adelphailurus also Dinofelis belongs, are now counted among the Felinae . Therefore, only two tribes remain here today, the Machairodontini with the more original genera Machairodus and Xenosmilus and the more modern genus Homotherium and the Smilodontini with Megantereon and Smilodon .

Internal systematics of the Machairodontinae according to Piras et al. 2018

Molecular genetic studies on fossil remains of Smilodon and Homotherium suggest a monophyletic group of saber-toothed cats within cats. The last common ancestor of the saber-toothed cats and today's cats lived in the Lower Miocene around 20 million years ago. Smilodon and Homotherium split off about 18 million years ago, which is before the time when today's cats began to branch. This distant diversification of Smilodon and Homotherium supports the reference of the two genera to different tribes . Several individuals from both North America and Europe have been examined by Homotherium . All of them show a close relationship, the separation of which only occurred around 216,000 to 77,000 years ago, i.e. in the transition from the Middle to the Upper Pleistocene . Since the Eurasian and North American animals are genetically interlinked, this speaks against the current splitting of Homotherium into several continentally separated species ( H. latidens in Eurasia and H. serum in North America). 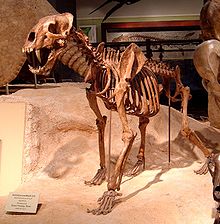 The genera of the saber-toothed cats:

Saber-toothed cats were, in all likelihood, active predators, although it is occasionally suggested that these animals could also have been purely scavengers, but this is extremely unlikely for a variety of reasons. Due to the sometimes quite large body, one can assume that some species were able to kill quite impressive prey. However, it is not clear whether they also attacked such huge animals as elephants and mammoths or at least their young. Numerous finds of mammoth skeletons , which were found next to some skeletons of the Scimitar cat ( Homotherium serum ) in the Friesenhahn Cave in Texas, indicate this.

The task of the characteristic saber teeth (Dentes canini) is still controversial today. In the upper jaw , the canine is the foremost tooth in the upper jawbone (maxillary) after the intermaxillary bone (premaxillary ). It is possible that the animals used them to inflict deep stab and tear wounds on very large prey, from which the victims then bled to death. Critics of this assumption suggest that teeth would break easily under such stress. They therefore suspect that these cats used their teeth to cut through the carotid artery (common carotid artery) and windpipe (trachea) at the same time as the prey that was already lying on the ground and unable to fight . This is also indicated by the extremely strong forelegs in some species such as the Smilodon , which were probably used to press prey against the ground in order to then set a precise killing bite. It is possible that the long canines were only used to impress other dogs.

It is also conceivable that the teeth were used in different ways, as they were in some cases quite different in different species. Another theory is that saber-tooth cats ate blood , intestines, and other soft, easy-to-eat parts of the body that did not endanger the saber-teeth. Like today's cats, they probably also had keratinized taste buds (papillae) on their tongues, which allowed them to loosen meat from bones without endangering their teeth .

Saber-toothed cat remains have been found on every continent with the exception of Australia and Antarctica. The oldest finds are around 15 million years old. In Europe these animals have been identified with the genera Machairodus , Paramachairodus , Megantereon and Homotherium . The geologically most recent find of Homotherium is around 28,000 years old and was brought to light by a Dutch fishing trawler from the bottom of the North Sea , which was mainland (see Doggerland ) during the last cold period . In North America, about 10,000 radiocarbon years ago, the two genera Smilodon and Homotherium disappeared almost simultaneously. With them, numerous other large animal species died out in the course of the Quaternary extinction wave. Climatic fluctuations or human influences are discussed as the cause for the sudden disappearance of the Ice Age large animal fauna (see also megaherbivore hypothesis ).

The saber-toothed cat Smilodon fatalis is the state fossil of the US state California . A total of 166,000 individual bones were exposed by her in the La Brea Tar Pits in California. It is estimated that at least 2,500 saber-toothed cats perished in the Los Angeles asphalt pits over a period of 25,000 years.

In Africa and South Asia, the last native saber-toothed cat, Megantereon, died out much earlier, around 500,000 years ago. Saber-toothed cat fossils have also been discovered in Germany:

In 2012, four teeth and a few leg bones of the saber-toothed cat Homotherium latidens were discovered in the archaeological excavation site Schöningen (Lower Saxony) . Their age is given as 300,000 years.

Before Smilodon reached South America over the Central American land bridge in the Pliocene , there were animals there that looked astonishingly similar to the saber-tooth cats with their extremely long canine teeth. They belonged to the genus Thylacosmilus , but were not related to the saber-toothed cats, but belonged to the marsupials . They became extinct with the arrival of the real saber-toothed cats. The principle of the extra-long canines has thus developed independently a third time alongside the pseudo-saber-toothed cats from the Nimravidae family . Some early mammal-like reptiles that lived before the dinosaurs also developed forms with long saber teeth, such as Inostrancevia .