Wildebeest in the Eastern Serengeti 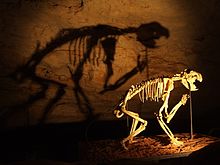 A mother sperm whale with her calf

The megafauna is the proportion of animals that make up the largest organisms in a habitat . The next smaller category is the macrofauna and the smallest is the microfauna .

To delimit the megafauna among terrestrial vertebrates, there are different definitions with different weight limits between 2 and 1000 kg.

Animals living in the ground that are larger than 20 mm are called megafauna of the ground. The megafauna of European soils includes various animal groups using the humus layer or earthworks such as belt worms , large snails , large arthropods (such as millipedes, spiders, woodlice, ants, beetles and their larvae) as well as all vertebrates ( amphibians such as newts, reptiles and mammals such as voles , moles , Rabbits , mice , badger, marmot). In tropical soils e.g. B. amphibians (amphibians), in dry soils z. B. aardvark or meerkat.

Megafaunas are also used in the case of water dwellers or benthos .

On remote islands, flightless birds often appear as megafauna, which can be explained by the absence of larger land predators over long periods of time.

The Cenozoic megafauna are communities of this period that are characterized by an above-average number of species weighing more than a ton. Faunas of this kind occur mainly in large habitats without any obstacles to the mobility of large animal species such as trees and mountains, such as steppes and tundras .

Prehistoric mega-faunas were found in the African steppes, in the tundras of the Ice Age , the steppe landscapes of Asia , prehistoric Australia , the prairies of the American continents and on large tropical islands such as Luzon , Madagascar and New Zealand .

The typical species composition of a megafauna in the Old World and North America is made up of representatives of the elephants , rhinos and cattle ; in South America , gigantic marsupials and toothed arms appear first , before fauna was exchanged with the megafauna of North America over the Central American land bridge.

At the transition from the Pleistocene to the Holocene , species extinction took place in the megafauna of the northern hemisphere.

In Australia , wombats and kangaroos in particular develop giant forms. Australia's megafauna, consisting of 24 known species, died out around 46,000 years ago, except for the kangaroo. These include the giant Diprotodon , which weighed up to 2,800 kilograms, and the marsupial lion .

Megafauna of large terrestrial mammals have only survived in Africa and southern Asia.

Influence on the biotope

The mega- herbivore hypothesis postulates that a megafauna of large herbivores favored the formation and maintenance of a semi-open park and pasture landscape.

The influence of a megafauna on the biotope is being investigated experimentally in the Pleistocene Park in Eastern Siberia .