The Cenozoic ( Greek. Καινός "new" ζῷον "animal"), also called Cenozoic called, is the era that within the eon Phanerozoic to the Mesozoic follows (Mesozoic) and continues today. An obsolete name for Cenozoic is Neozoic . The beginning of the Cenozoic era is set about 66 million years ago, after the mass extinction at the end of the Cretaceous period , during which, among other things, all (non-avian) dinosaurs died out ( Cretaceous-Paleogene boundary ).

The Cenozoic Era comprises the geological development of today's Europe and the other continents with the unfolding of the Alps and the Himalayan mountains ( Alpidic orogeny ) up to their present form and the radiation and development of today's flora and fauna, especially mammals (Mammalia). While the climate was still very warm, especially in the Eocene, the most recent Ice Age began around 2.6 million years ago with the icing of the Arctic . The inland glaciation of the southern polar regions started 34 million years ago and marks the beginning of the Cenozoic Ice Age .

The youngest of the geological ages was defined by John Phillips in its English form in 1841 as Cainozoic or Kainozoic. He divided the age into three sections, the 'Eocene Tertiaries', the 'Meiocene Tertiaries' and the 'Pleiocene Tertiaries' (from bottom to top), which corresponded to the historical tripartite division of the Tertiary according to Charles Lyell . In addition to this stratigraphic classification, Phillips also expressly included the recent lifeworld in his definition of the Cenozoic, a view that is still valid today.

Structure of the Cenozoic Era

Position of the Cenozoic in the Phanerozoic:

The Cenozoic was previously divided into two systems : the Tertiary (with the series Paleocene , Eocene , Oligocene , Miocene and Pliocene ) and the Quaternary ( Pleistocene and Holocene ). Since 2004 there has been a division into three systems: the Paleogene (with Paleocene, Eocene and Oligocene) is the oldest period, followed by the Neogene (with Miocene, Pliocene). The serial classification of the youngest system of the Cenozoic, the Quaternary, remained unchanged, but since June 2009 the Gelasian has been placed in the Pleistocene as its lowest level .

As early as 1759, the Italian geologist Giovanni Arduino noticed the poorly consolidated rock formations, which he called montes tertiarii (third mountains), the limestone montes secundarii (second mountains) and the montes primitivi (original mountains) made of granite, basalt or slate. faced. These names already give a ranking in terms of origin and age. The mountains that arose in the "Tertiary" are alpine . However, the term "tertiary" has not been used in the geological time scale since 2004 . The term “Quaternary” was also removed from the geological time scale, but reintroduced in 2008 after heated discussions by the International Commission on Stratigraphy (ICS).

At the beginning of the Cenozoic there was still a relatively extensive remnant of the former major continent of Gondwana with the connected land areas of Australia , Antarctica and South America . Its final disintegration began around 45 million years ago when Australia broke away from Antarctica and South America followed this trend a little later. The opening of the Tasmanian Passage and the Drake Strait established a system of ocean currents in the southern hemisphere that was already very similar to the current thermohaline circulation .

Clickable diagram of the temperature development in the Cenozoic including a warming scenario on the basis of the extended representative concentration path ECP 6.0 up to the year 2300.

In the northern hemisphere in connection with the formation and expansion of the created North Atlantic , the North Atlantic Magmatic Province United (English North Atlantic Igneous Province , abbreviated NAIP ). The igneous or volcanic processes began as early as the lower Paleocene (about 64 to 63 mya), extended in a greatly weakened form into the early Miocene and exhibited several increased activity cycles in between, with intrusive and effusive phases alternating along the diverging plate edges. The flood basalts rising from the earth's mantle had an area of ​​approximately 1.3 to 1.5 million km² and covered parts of Greenland, Iceland, Norway, Ireland and Scotland.

After the impact of the Chicxulub asteroid and the associated mass extinction, the earliest Paleocene was characterized by rapidly changing and only gradually stabilizing climatic conditions, whereby the regeneration of the terrestrial biotopes apparently proceeded faster than the renewal of the oceans including the deep sea areas, which probably more than one Claimed a million years. In addition to the birds, the mammals in particular benefited from the ecological niches that had become free . In the period from 0.4 to 1.0 million years after the environmental crisis on the Cretaceous-Paleogene border, they recorded both an initial increase in biodiversity and thus the formation of new species and, in the further course of the Paleocene, a steady increase in the size of many genera among the Conditions of a relatively stable warm climate .

A more recent study names a temperature value for the early and middle Paleocene on the basis of multiproxy evaluations which, with a CO 2 concentration of around 600 ppm, roughly corresponds to that of the late Cretaceous ( Maastrichtian ). After a brief cooling period (≈ 59 mya), the climate became warmer again and, at the Paleocene- Eocene transition (55.8 mya) , culminated in the most extreme heat phase of the Cenozoic era, with a worldwide temperature increase of 6 to 8 ° C within a few millennia. The Paleocene / Eocene maximum temperature (PETM) was triggered by the brief entry of several thousand gigatons of carbon dioxide or methane into the atmosphere. Possible sources of these emissions are volcanic outgassing, unstable methane hydrate deposits on the continental shelf or thawing permafrost soils . Two million years later , another strong global warming occurred with the Eocene Thermal Maximum 2 (ETM-2, 53.6 mya). Even if the climatic exceptional state of the two heat anomalies on a geological scale of 170,000 to 200,000 years was short-lived, it had a lasting impact on biodiversity and paleoecology of the entire planet. 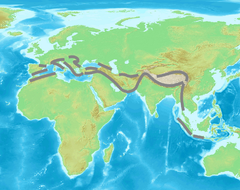 The Ypresium , the lowest chronostratigraphic stage of the Eocene, runs almost parallel to the so-called Eocene climatic optimum , an epoch characterized by subtropical to tropical climates that ended 49 to 48 million years ago without the temperature peaks of the embedded thermal anomalies being reached again. At about the same time, the main phase of the collision of the Indian continental plate with the Eurasian plate, which was initially accompanied by violent flood basalt volcanism , began . In the course of the unfolding of the Himalayas and other mountain ranges ( Alpidic orogeny ), erosion and weathering processes and the associated CO 2 reduction became a climate factor that further intensified the cooling process (also accelerated by the Azolla event in the Arctic Ocean ). The slow transition from warm to cold-age climates (often referred to in specialist literature as the "transition from greenhouse to icehouse climate" ) was interrupted by the climate optimum of the Middle Eocene (40 mya) for about 400,000 years, with the possible triggers and causes for the the specific temperature profile of this warming phase are still largely unexplained.

A sharp climatic cut occurred at the Eocene- Oligocene border 33.9 million years ago. A major factor in this change was the creation of the Drake Strait , which is now 480 nautical miles wide and connects the Atlantic with the Pacific Ocean . A land bridge existed between Antarctica and South America until the later Eocene, before the Drake Passage gradually began to open up as it deepened. This created the Antarctic Circumpolar Current in the Southern Ocean , which subsequently cut off Antarctica from the supply of warmer sea water and thermally insulated the continent. Almost parallel to this, during the Grande Coupure ("Great Gorge") there was a major extinction of species , which was accompanied by a marked cooling of terrestrial and marine areas and which affected 60 percent of European mammal species. The temperature of the oceans fell by 4 to 5 ° C down to the deeper regions, and the sea level fell by around 30 meters within a relatively short time. What is noticeable in this context is the steep drop in the CO 2 concentration in the earth's atmosphere . While this was 700 to 1,000 ppm at the end of the Eocene, it dropped abruptly by around 40 percent at the beginning of the Oligocene. The glaciation of the south polar mainland, which began at a CO 2 threshold of around 600 ppm , was initially controlled by the cyclical changes in the Earth's orbit parameters , and marked the beginning of the Cenozoic Ice Age . During this time the gradual spread of the C 4 plants adapted to arid conditions (especially grasses ), which require considerably less carbon dioxide for photosynthesis than C 3 plants, began .

In the further course of the Oligocene and especially during the Miocene, the CO 2 concentration and the global climate were subject to relatively strong fluctuations. At the height of the Miocene climatic optimum (17 to 15 mya) the atmospheric carbon dioxide content rose from 350 ppm at the beginning of the Miocene to 500 to 600 ppm for a long time. In the course of global warming, in which the massive CO 2 emissions of the Columbia Plateau basalt were probably significantly involved, the forest habitats were pushed back, and steppe and grasslands were increasingly taking their place. At the same time, the Antarctic glaciers of that time lost some of their mass, but without melting completely. Simulations including the CO 2 level at the time indicate that the core areas of the East Antarctic Ice Sheet were hardly affected by the temperature increase in the Middle Miocene. Under the influence of strong erosion and weathering processes, the CO 2 concentration fell again to around 400 ppm towards the end of the optimum 14.8 million years ago, coupled with a renewed increase in inland Antarctic freezing. In the younger Miocene (10.2 to 9.8 mya and 9.0 to 8.5 mya), two "laundry room phases" occurred in large parts of Europe, in which the climate became significantly more subtropical and wetter (with annual rainfall of in part over 1,500 mm). 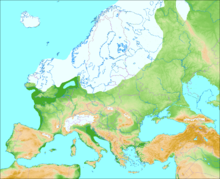 The Quaternary Cold Age periods as a subsection of the Cenozoic Ice Age began around 2.7 million years ago with extensive glaciations in the northern hemisphere and were often associated with the closure of the Isthmus of Panama . In the meantime, however, the scientific community is of the opinion that the increasing arctic glaciation is associated with a significant decrease in the global CO 2 concentration, which means that the summer months in particular are cooler. Some studies state a first cooling phase in the late Pliocene (3.2 mya) and a second after the beginning of the Pleistocene (2.4 mya), during which the CO 2 content fell from originally 375 to 425 ppm to 275 to 300 ppm, with a further decrease during the subsequent cold-time cycles. For probably the first time during the 541 million years long Phanerozoic Era , both poles were covered extensively by ice. During the Quaternary Cold Age , relatively warm and very cold sections alternated. The cold phases ( glacials ) were characterized by massive glacier advances. At 41,000 and 100,000 years, they were significantly longer than the warm periods ( interglacials ), which lasted around 15,000 years on average.

The interglacial of the Holocene, the youngest section of the Cenozoic, began after the end of the last glacial period 11,700 years ago. This period includes all known advanced civilizations as well as the entire historically documented human history including modern civilization. During the Holocene there was a consistently stable global climate with a temperature corridor of approximately ± 0.6 ° C. The absence of geophysical, biological and climatic crises is seen as a guarantee that apart from regionally limited cuts, a relatively uniform cultural and technological development of human societies could take place.

Since the beginning of industrialization in the 19th century, people have increased the proportion of greenhouse gases in the atmosphere to a significant extent. The burning of fossil fuels in particular contributed to the fact that the carbon dioxide concentration rose from 280 ppm to 410 ppm (as of 2019). There are also considerable methane emissions and other greenhouse gases such as nitrous oxide (laughing gas) and carbonyl sulfide . If it is not possible to reduce anthropogenic emissions to a large extent, the climatic status of the Pliocene and, in extreme cases, that of the Eocene could be reached again in the foreseeable future (see diagram above), with a significantly higher global temperature, rise in sea ​​level , increase in extreme weather conditions as well as a shift in climatic zones .