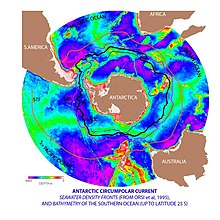 Bathymetric map of the Southern Ocean showing the density fronts ( isodensi ) of the ocean water. The black front (SACC) roughly corresponds to the course of the Antarctic circumpolar current.

The Antarctic Circumpolar Current (Engl. Antarctic Circumpolar Current (ACC) , also Antarctic Subpolar ) is a cold ocean current around Antarctica , the only one that the Atlantic , Indian and Pacific Ocean connects directly and the most powerful of the earth. In the direction of the earth's rotation, the ACC is driven by the west wind drift . In the Drakestraße between Antarctica and South America it is particularly striking and transported there between 56 ° and 61 ° south latitude and between the sea surface and over 4000 m depth is about 140 times the amount of water of rivers of the earth, 140  Sv . Its influence on the global climate and the regional climate of the southern polar region is enormous.

The water of the ACC is colder and less salty than the large-scale water of the subtropical vortices that circulates north of it . South of the so-called polar front, it contains particularly cold, little salty water near the surface. The ACC maintains these temperature differences through its easterly current. Before the Tasmanian Passage and Drake Strait opened up between 30 and 40 million years ago and allowed the ACC, Antarctica had a moderately cold climate.

Very salty deep water rises south of the ACC. The negative pressure that lifts the heavy deep water is created by the Coriolis force , which drives the ACC away from the earth's axis to the north. Both forces are largely in balance. Close to the ground, however, the current is braked by friction, and the Coriolis force drops. This is where the inflow of deep water from the ocean basins takes place. At shallow depths, this salty water mixes with that of the ACC, the most important element of the global conveyor belt .