from Wikipedia, the free encyclopedia
This is the spotted version , flagged on May 14, 2020 . There is 1 pending change that has yet to be viewed.

The Southern Ocean comprises the ocean area south of the 60th  parallel or south of the Antarctic convergence . This summarizes the marine areas that surround the continent of Antarctica (the actual land mass of Antarctica ). To the north, it merges into the Atlantic , Indian and Pacific .

The designation Southern Ocean was officially decided by the International Hydrographic Organization (IHO) in the spring of 2000 . Until then, the Antarctic marine areas were known as the Southern Arctic Ocean , consisting of the southern areas of the Atlantic, Indian and Pacific Oceans. These marine areas are now known as the Atlantic, Indian and Pacific Sectors of the Southern Ocean. The definition follows the legal stipulation of the Antarctic Treaty . The natural boundary is formed by the Antarctic convergence. This is the zone where the cold water masses of the Southern Ocean meet the warm water masses of the North. It runs between the 40th and 60th degree of latitude and fluctuates both in course and seasonally.

An amazing ecosystem has developed in the Southern Ocean , the key figure of which is krill . Large parts of it freeze over in winter. These areas are then called pack ice . Table icebergs that arise from fragments of the ice shelf are typical of the Southern Ocean . It is considered by seafarers to be the stormiest of all oceans . 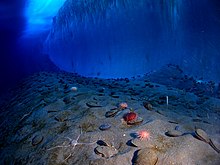 Seabed of the Southern Ocean on the coast of Antarctica

Within the Southern Ocean or on its sea ​​floor there are thresholds , deep-sea basins and a deep-sea channel .

In some cases, on the bottom of the Southern Ocean, there is sediment in the form of fine gray mud in meter thickness: an excellent natural “ climate archive ” from the last Ice Age . Dead microorganisms belonging to the plankton make it possible to reconstruct the history of the climate over many millennia.

Like the rest of the oceans, the southern ocean has a number of important minor seas (order clockwise ):

∗ The Drake Passage, between South Shetland and South America, falls into the areas of the South, Pacific and Atlantic Oceans
∗∗ The Koenig Haakon VII Sea overlaps the Lasarew Sea, Riiser Larsen Sea and most of the Cosmonaut Sea

The north-western tip of the Antarctic Peninsula , Palmerland , with its island world. Marked in red: Adelaide Island

In the Southern Ocean or off the coast of Antarctica , for example, the following islands and archipelagos are located : Alexander I Island , Balleny Islands , Berkner Island , Ross Island , Scott Island , South Orkney Islands and South Shetland Islands .

According to calculations by scientists, the freshwater input from glacier ice into the Southern Ocean increased by up to 20% between 1982 and 2008. This could explain the measurably decreasing salt content of the seawater there for years .

Influence on the earth's climate

Antarctic sea ​​ice anomaly : Percentage deviation between the mean September ice extent from 1981 to 2010 and the September values ​​for individual years.

The Southern Ocean, kept in motion by storms (see “ Roaring Forties ”) stores large amounts of carbon dioxide and heat: Persistent westerly winds and differences in water density move the strongest ocean current worldwide, the ring-shaped “ Antarctic Circumpolar Current ”. An important part of the global thermohaline or north-south overturning circulation, the North Atlantic Current carries relatively warm water on the surface from the tropics to the North Atlantic , where it cools and sinks, in the Southern Ocean it reappears at the end of the circulation. Despite the roughly constant temperature here, the Southern Ocean absorbs more than two thirds of the additional heat generated by the greenhouse effect : it drifts northward on the surface, while cooler water rises locally.

The Antarctic Ocean probably stored huge amounts of carbon dioxide by means of plankton circulation during the last ice age and in this way withdrew it from the earth's atmosphere : Plankton absorbs CO 2 on the surface, it sinks into the depths after it dies; Bacteria, in turn, quickly break down the plankton. The CO 2 is released again, but it remains in dissolved form in the deep ocean layers. Up until the end of the last ice age, the CO 2 content of the earth's atmosphere was probably around a third lower than it is today.