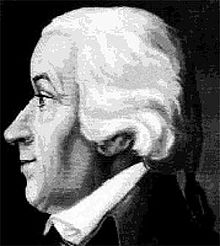 Justus Perthes was the son of the Rudolstadt court doctor Johann Justus Perthes. After his training as a businessman he got a job in the bookstore of Carl Wilhelm Ettinger in Gotha. Together with him and his future brother-in-law Friedrich Duerfeldt, he founded a company in 1778 in order to continue the Ettinger'sche bookstore under his own direction.

In September 1785 he founded Justus Perthes' publishing house, which from then on produced and sold the Gotha Geneaological Court Calendar, first published in 1763 and published by Ettinger, and its French edition, the Almanach de Gotha . Thanks to Perthes, the reference work soon to be known throughout Europe as “Der Gotha” changed from a calendar of the Enlightenment to an aristocratic lexicon with a diplomatic-statistical state manual.

In 1815 Perthes planned with the cartographers Adolf Stieler and Christian Gottlieb Reichard the publication of an atlas, which was characterized by “Comfortable format, the greatest possible accuracy, clarity and completeness, but also appropriate selection, uniform projection and scale, beautiful paper, good printing, careful Illumination, cheaper price ”and should expand the publisher's program.

In 1816, the year Perthes died, the first edition of Stieler's Hand-Atlas was published , which established the worldwide reputation of Justus Perthes 'Geographischer (Verlag) Establishment Gotha - which was only created after Perthes' death.

In 1784 Perthes married Sabine Ernestine Dürfeldt (1765–1817), the sister of his business partner and engraver Friedrich Dürfeldt. He had 15 children with her, including Wilhelm Perthes , who continued the publishing house from 1816.

The publisher Friedrich Christoph Perthes was the nephew of Justus Perthes, the princely tax secretary Christoph Friedrich Perthes his brother.

Justus Perthes found his final resting place in Gotha Cemetery I (also called Alter Gottesacker ) between Werderstrasse (today Bohnstedtstrasse) and Eisenacher Strasse. After the cemetery was cleared in 1904 for the construction of the Stadtbad and Arnoldischule , Perthes' tombstone was temporarily moved to a new location on Cemetery II above Eisenacher Strasse . After its abolition in 1968/69, the tombstone was brought to the main cemetery , where it is now in the honor grove next to the stones of other important Gotha personalities. The tombstone was restored in 2014 with a donation from Stephan Justus Perthes (7th generation descendant). The original grave of Johann Georg Justus Perthes is in today's schoolyard of the Arnoldischule, right at the foot of the large entrance stairs.

The historic buildings of the Justus Perthes publishing house, founded in 1785, at Justus-Perthes-Straße 3–9 (moved in from the middle of the 19th century, continuously expanded; until around 1935 "Friedrichsallee") were converted into Perthes- Forum rebuilt. The construction measures with a volume of around 11,000 m² (approx. € 18 million from funds from the EU, the federal government, the Free State of Thuringia and the city of Gotha) were completed in November 2014. Since the end of 2015, the Perthes Forum has housed extensive holdings of the Gotha Research Library with a focus on the Perthes Gotha Collection , as well as storage rooms and workshops of the restorers formerly housed in Schloss Friedenstein , the library and the archive, supplemented by a reading room, and the Thuringian State Archive in Gotha .

In the 2011 novel Dinner for One on Goth'sch it is alleged that Justus Perthes was the model for the character of Sir Toby in the famous sketch Dinner for One . In the theater play Dar ninezschsde Gebordsdaach or Dinner in Goth'sch , which has been performed annually on New Year's Eve in Gotha since 2009, the servant's actor quotes the deceased Perthes with absurd toasts that are clearly borrowed from the publishing business (e.g. "Cheers, your very princely Atlas!", "Sophie, my crumpled map!").