The Arctic Ocean , located in the far north of the northern hemisphere of the earth is, is located between each adjacent in southern compass continents Asia , Europe and North America . Because it lies between several continents and although scientifically one of the five oceans on earth, it is also considered the intercontinental Mediterranean .

The Arctic Ocean is connected to the Atlantic by the approximately 1500 km wide European Arctic Ocean between Greenland and Northern Europe or Scandinavia , as well as by some winding roads that lead through the heavily fragmented north Canadian island world to the broad Davis Strait west of Greenland. It is only connected to the Pacific by the approximately 85 km wide Bering Strait .

The Arctic Ocean has an extension of around 14.09 million km² and is largely covered by ice . The ice cover increases and decreases with the seasons. Overall, the ice surface has decreased significantly since the 1970s.

The most important tributaries are the Ob , Yenisei , Lena and Kolyma , the tributaries of the Barents Sea and, from North America, the Yukon River in Alaska and the Mackenzie River with Hudson Bay . The researchers working with Bruce Peterson claim that the amount of freshwater that entered the Arctic Ocean increased by around 128 km³ or around seven percent between 1936 and 1999. 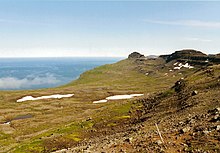 Hornstrandir in Iceland ; View of the Denmark Strait , which connects the Arctic Ocean with the North Atlantic

The Arctic Ocean borders the northern areas of these countries and parts of the country: Alaska ( USA ), Canada and Greenland ( Denmark ), Iceland , Norway and Russia . The political affiliation of different parts of the Arctic Ocean to the neighboring states is, however, controversial .

Depth profile through the Arctic Ocean

Within the Arctic Ocean or on its sea ​​floor there are thresholds , deep-sea basins and a sea ​​depression .

The thresholds include the Fletcher back , the Gakkel back , the Lomonossow back ( Harris's threshold ), the East Siberian threshold and the Chukchi threshold . The three large deep-sea basins, which are all located in the center of the ocean, are the Eurasian Basin up to 5449 m deep in Litketief , the Canadian Basin up to 4994 m deep and the Central Arctic Basin up to 3290 m deep .

The Arctic Ocean is used approximately three to five months a year for shipping operated by Russia in the Northeast Passage and the United States and Canada in the Northwest Passage . The Russian state maintains a nuclear icebreaker fleet for this purpose . There are also a small number of expedition cruises. Furthermore, submarines from several nations are active in the Arctic Ocean . The main ports are Churchill , Arkhangelsk , Severomorsk , Dikson , Murmansk , Pewek and Tiksi .

On August 27, 2014, the expedition cruise ship Hanseatic under captain Thilo Natke advanced to a distance of around 480 kilometers to the North Pole; it came to a north position which until then could only be reached by icebreakers and thus set a world record. 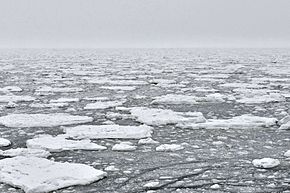 The four poles of the northern hemisphere lie within the Arctic Ocean or on its islands .

Due to the pronounced seasonality of 2 to 6 months of midnight sun and polar night in the Arctic Ocean, the primary production of photosynthetic organisms such as ice algae and phytoplankton is limited to the spring and summer months (March / April to September). Important consumers of primary producers in the central Arctic Ocean and the adjacent shelf seas are zooplankton, especially copepods ( Calanus finmarchicus , Calanus glacialis and Calanus hyperboreus ) and krill , as well as ice-associated fauna (e.g. amphipods ). These primary consumers form an important link between the primary producers and higher trophic levels . The composition of the higher trophic levels in the Arctic Ocean varies with the region (Atlantic side vs. Pacific side) and with the sea ice cover. Secondary consumers in the Barents Sea , an Arctic shelf sea influenced by the Atlantic, are mainly subarctic species, including herring , young cod and capelin . In the ice-covered regions of the central Arctic Ocean, the polar cod is a key predator for primary consumers. The top predators in the Arctic Ocean - marine mammals such as seals , whales and polar bears , hunt fish.

Endangered marine life in the Arctic Ocean includes walruses and whales. The area has a fragile ecosystem and is particularly exposed to climate change as it is warming faster than the rest of the world. Yellow hairy jellyfish are abundant in Arctic waters. The banded butterfish is the only species of butterfish that lives in the Arctic Ocean.

About 50 species of seabirds, including auks , petrels , cormorants , gulls , terns and birds of prey , crowd the nesting rocks and beaches in June and July. They all get their food from the sea. Eight species of seals breed in the Arctic, six of them between the ice . The largest are the walruses , whose bulls are over four meters long and weigh more than a ton. They live mainly along the coasts of Eastern Siberia, Alaska, Canada, Greenland and Northern Scandinavia, and dive in shallow water for mussels and other bottom invertebrates. The young are born on the drift ice in May . Arctic fur seals only breed on the islands of the Bering Strait .

There are fears that the groundwater streams of the Tetscha and Ob rivers could lead to heavily contaminated water from Lake Karachay entering the Arctic Ocean. This would contaminate one of the last great wilderness areas. Possible consequences for the flora and fauna cannot be precisely estimated.