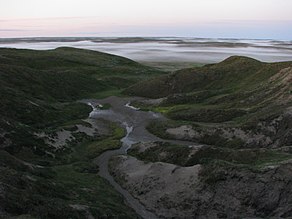 View over the island of Kolguiev

Kolgujew ( Russian Колгуев ) is a Russian island in the eastern Barents Sea .

The 3495 km² island, which belongs to the Nenets Autonomous Okrug and is around 75 km from the north-eastern European mainland, is located northeast of the Kanin Peninsula , north of the Timan Ridge and northwest of the eastern part of the North Russian lowlands . It rises a maximum of 173  m above sea level and is mostly flat. The surrounding sea is very shallow and for a long time posed a threat to shipping with its sandbanks .

The climate of the island of Kolguev is harsh and cool with long, cold winters (January −10 to −15  ° C , often below −20 ° C) and short and cool summers (July 4 to 6 ° C, 3 months above 0 ° C ). The vegetation is tundra-like with a few shrubs and grasses; there are numerous lakes and swamps and a few rivers . Kolgujew is the breeding area for the majority of Western European white-fronted , barnacle and bean geese , which find good living conditions here due to the many water and swamp areas. The island is therefore designated by BirdLife International as an Important Bird Area (RU1436). Mammals are rare on the island, and red and arctic foxes can be found here and there .

The island is mainly inhabited by Nenets , who mainly live from reindeer herding . It also discusses Kolguyev since 1987 petroleum promoted after 1982 on the east coast the deposit Pestschanoosjorskoje had been discovered. The exploration work had already started in the 1960s.

The only village on the island and the seat of the Kolgujewski Dorfsovjet is Bugrino on the south coast with 446 inhabitants, of which 416 (93%) are Nenets. From there a good 80 km long road leads across the island to the only temporarily inhabited settlement Severny on the north coast.

Kolgujew has been inhabited by pomors for a long time . Hugh Willoughby was probably the first Western European explorer to see the island in 1553, and Stephen Borough three years later . On August 20, 1580 two ships of the Muscovy Company ran aground off the island, but could be made afloat again. During his attempt to navigate the Northeast Passage , the Dane Jens Munk was shipwrecked off the island in 1609 and was only able to reach the mainland in a dinghy with hardship. Around 1820 the coast of Kolguev was mapped by several Russian expeditions, including Friedrich Benjamin von Lütke . Since the beginning of the 19th century Nenets settled permanently on Kolgujew.

The first scientists to explore the island were the botanist Franz Joseph Ruprecht and the physicist Aleksander Stepanowitsch Saweljew (1820–1860) in 1841 . In 1894 the Briton Aubyn Trevor-Battye (1855–1922) spent several months here studying natural sciences and ethnography. A Russian expedition led by the botanist Sergei Alexandrowitsch Buturlin mapped the interior of the island for the first time in 1902 and explored the flora and fauna. The Severny research station was set up on the northern tip of the island under Soviet rule in the 1930s.

Wassili Golowanow : The island or justification of senseless travel , Matthes & Seitz, Berlin 2012, ISBN 978-3-88221-994-4 ; a report about the island of Kolgujew including its myths, fairy tales and legends