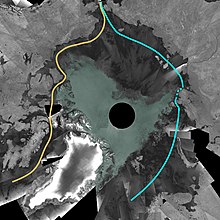 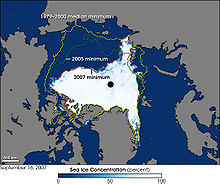 The Northeast Passage , also Northern Sea Route , ( Russian Северный морской путь , abbreviated as the acronym Севморпуть ) is a sea ​​route in the Arctic Ocean along the northern coast of Eurasia , which connects the Atlantic and Pacific . This sea route is around 6,500 kilometers long and leads from the European Arctic Ocean through the Barents , Kara , Laptev , East Siberian and Chukchi Seas to the Bering Strait .

The first explorations of the Northeast Passage took place in the 16th century by English and Dutch sailors such as Hugh Willoughby and Willem Barents , but failed in the pack ice . After three unsuccessful expeditions between 1594 and 1596, the Dutch made no further attempts to find the passage. At the beginning of the 17th century, Russian seal hunters and traders reached Cape Chelyuskin ; In 1648 Semyon Deshnev and F. A. Popov sailed around the Chukchi Peninsula . Other Siberian coastlines were explored by Vitus Bering from 1733 during the second Kamchatka expedition .

Samuel Engel (1702–1784) from Bern wrote geographical treatises on the possibility of a northeast passage.

Crossings and economic use

Adolf Erik Nordenskiöld succeeded in making the first complete passage, with one winter, in 1878/79. It was not until 53 years later (1932) that the icebreaker Alexander Sibirjakow made the first passage without wintering. Then the taught Soviet Union , the Chief Directorate of the Northern Sea Route one. In the summer of 1940, the German auxiliary cruiser Komet, with the help of Russian icebreakers , advanced through the North Sea Passage into its area of ​​operations in the Pacific . In the 1950s and 1960s, maritime traffic was systematically expanded through the construction of the ports of Dikson , Tiksi , Pewek and Prowidenija , and the shipping period was extended through the use of powerful icebreakers. In May / June 1978, for example, the atomic icebreaker Sibir needed 18 days to travel from Murmansk to the Bering Strait. The Northeast Passage has been open to international shipping since 1967, but can mostly only be used during the summer months.

The western section of the sea route ( Kara Sea with the ports of Murmansk and Arkhangelsk in the west to Dikson and Dudinka near Norilsk in the east) is navigable almost all year round; mainly ores are transported westwards and supplies eastwards. In the eastern section ( Nordwik , Tiksi, Pewek) the passage through difficult-to-pass sections of pack ice is restricted, so that the transport volume in 1989 was only about a tenth of the western section and the ports are mainly supplied from the east.

The collapse of the Soviet Union in the 1990s led to a decline in shipping traffic under market conditions due to the relatively high transport costs (especially icebreakers, ice reconnaissance), so that use of the Northern Sea Route practically came to a standstill, with serious consequences for those on it cities like Tiksi, which have since fallen into disrepair and increasingly depopulated.

However, climatic changes could make the passage economical again. The traditional sea route from Europe to Asia ( Rotterdam - Tokyo ) through the Suez Canal is 21,100 kilometers, while the route through the Northwest Passage is only 15,900 kilometers, and the route through the Northeast Passage is almost 2,000 kilometers shorter at just 14,100 kilometers. The Northwest and Northeast Passages were both free of ice for the first time on August 29, 2008, and in the following years the Northeast Passage always remained for a few weeks between August and the beginning of October, whereby the duration of the passability seems to be increasing more and more. So a Chinese icebreaker from the Pacific to Iceland was in August 2012 encountered much less ice than expected, allowing for the return trip a much closer to the example in the exploratory trip north pole leading past and thus shorter route could be chosen.

The year 2009 saw a resurgence in commercial use of the Northeast Passage, when the Bremen-based Beluga shipping company used this sea route for the first time with two merchant ships, saving 5,400 km compared to the traditional route through the Suez Canal and the Mediterranean Sea . The ships Beluga Fraternity and Beluga Foresight , which set off from Vladivostok on August 21, 2009, had ice class E3 according to the shipping company and were therefore suitable for this northern passage. On the way to Europe, a stopover was made in the Siberian port of Nowy Port . The ships were led by Russian captains.

In July 2010, two tankers from the Russian shipping company Sowkomflot then crossed the Northeast Passage for the first time . The two ships Warsuga and Indiga were accompanied by an icebreaker from Vladivostok to Pewek in Eastern Siberia. In 2010, a total of ten ships took advantage of the passage.

From 2010 to 2011, the amount of goods transported through the Northeast Passage increased more than sevenfold to 0.82 million  tons , transported by 34 ships. In the following year 2012, 46 ships with 1.26 million tons were reported. There was no information about the icebreaker accompaniment, insurance premiums plus risk surcharges for these trips, except that the Russian authorities charge a fee.

In the meantime, the expansion of the Northeast Passage into an important traffic artery was declared an official goal of the Russian government and a new law was passed at the end of 2011 to clarify the legal framework for its future use. In addition, significant investments were made in the modernization and expansion of the icebreaker fleet as well as the accompanying infrastructure of the ship route (such as the purchase of modern communication and navigation equipment), including the construction of the port of Sabetta, which is intended for liquefied natural gas export, which will be pushed ahead from 2013 heard.

In the 2013 shipping season, 71 commercial journeys were counted through the Northeast Passage, over seven times as many as in 2010.

According to the statistics of the Northern Sea Route Administration, 31.5 million tons were transported in 2019 , of which 20.5 million tons were LNG , mainly from the Sabetta Terminal. The Russian authorities reported complete passages of 37 ships with 697,200 t of cargo in 2019. The number of complete crossings through the Northeast Passage without calling at a Russian port is (still) low.