The title of this article is ambiguous. Further meanings are listed under icebreaker (disambiguation) .

The German research ship Polarstern designed as an icebreaker

An icebreaker is a ship that is specially designed and equipped to navigate frozen seas or frozen rivers. This trip can take place for the icebreaker itself with its cargo, or to clear a fairway for other ships and keep it navigable.

An icebreaker has to fulfill several conditions compared to normal ships:

The trunk of a moving ship in the ice requires an Ice Class : Stronger planking inside the diving area of the fuselage, consistently double fusion of the outer shell, reinforced Innenspanten and narrower frame spacing . In relation to their size, icebreakers are particularly wide ships in order to create the widest possible shipping channel . 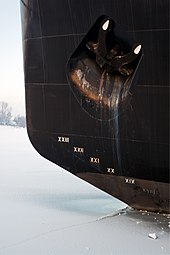 Icebreaker hull: bow of the Polarstern

The bow is usually shaped in such a way that the ice is not cut by a sharp bow edge like a knife, but pressed down by the flat and curved underside of the bow, so that the icebreaker pushes itself on the ice and breaks it under its weight. The shape of the bow must ensure that the ice fragments are pushed far around the ship's hull and do not damage the propeller or the rudder . Piling up the broken ice in clods in front of the bow would seriously hinder the icebreaker or force it to stand still. Thanks to improved bow shapes, modern icebreakers only need half the engine power of earlier icebreaking ships.

Another route is taken with the Thyssen-Waas icebreakers . Thyssen-Waas icebreakers have a patented bow shape with which a completely ice-free canal can be created behind the ship. With these icebreakers, the ice is cut by two blades attached to the left and right of the hull. The fragments are then pushed under the neighboring ice with compressed air. So far, two icebreakers have been successfully converted with this special bow. With the optimized bow, twice the ice breaking capacity of twice the ice thickness can be achieved with the same engine power. Another advantage is that these icebreakers can be used in both salt and fresh water. Since they cut the ice and do not push themselves onto the ice, the different depths of immersion in salt or fresh water do not change the underlying mechanism.

This ice break mechanism is a further development of the three-edge technology, in which the ice is essentially broken down into two plate breaks through a wide bow, the side edges, the keel line and a special design of the lower ship and displaced under the neighboring ice through the bow and the lower ship becomes. Since the 1990s, this technique has ensured an ice-free channel for much longer than previous techniques, which have the disadvantage that fragments of ice in the channel can quickly freeze back together. Icefall displaced under the neighboring ice does not produce any nuclei in the broken fairway.

The engine power of an icebreaker is higher compared to other ships of the same size in order to be able to break the ice in front of it. Depending on their icebreaking performance, icebreakers are divided into ice classes. 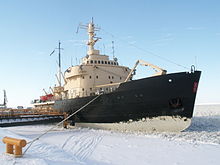 The Sampo, used today as a “passenger icebreaker” in the port of Kemi 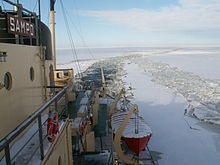 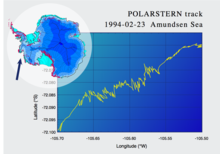 If the weight of the ship alone is not enough to break the ice masses, a special ramming mechanism can be activated to assist. One method of generating the pounding is to pump large amounts of water back and forth between the bow and stern of the icebreaker, causing the ship to vibrate (pitching vibrations, “pounding”) and increasing the pressure on the ice. Another variant of various nuclear-powered Russian icebreakers is to melt the ice in the fore section using over-tensioned water vapor generated in the cooling circuit . Under the most favorable conditions, the maximum ice thickness that can be overcome can be almost doubled (at the expense of speed). However, this procedure is controversial and not permitted in all bodies of water, as it severely damages the marine flora directly under the ice, especially on routes with a lot of traffic.

A so-called hammer is used as a further ramming method. These are two very heavy weights that rotate in opposite directions. Thus the inertia forces cancel most of the time of the revolution. If the weights are up or down at the same time, the bow will be jerked up or stomped on the ice.

A modern icebreaker is driven by protected screws on both sides at the bow and stern and is additionally stabilized by lateral jet nozzles. Additional air can be pumped from holes in the hull below the waterline in order to break the ice through the rising bubbles.

Both tamping techniques, i.e. the rapid pumping of large amounts of water from the trim tanks and tamping using heavy imbalance weights, have a further advantage: the submerged surfaces of the ship's side are wetted with water when they emerge, which acts like a lubricating film between the ship's side and the ice. The ramming mechanisms also have the job of freeing the icebreaker itself if it gets stuck.

When the ice is thick or in pack ice , the speed of the ship can go to zero due to the high ice resistance. In this case the icebreaker has to reset and make a new attempt. This, under certain circumstances, going back and forth several times is called “boxing”.

Nowadays a helicopter is part of the equipment of large icebreakers in order to ensure the connection to the mainland in an emergency, but above all to explore the ice conditions and thus determine the optimal route of the ship.

Conduct on the open sea

Due to the poor ratio of width to length, a short keel and the drive designed for icebreaking, an icebreaker behaves extremely uncomfortably on the open sea. It has a strong tendency to roll and is difficult to maneuver in stormy seas. Some new icebreakers try to minimize this problem with ballast tanks.

The broad shape of the bow, incapable of elegantly cutting through high waves, also encourages an icebreaker to dive into wave crests.

New ship technologies of the " pod drives ", an electrically driven propeller under the hull that can be rotated 360 degrees, also result in more safety on the high seas for icebreakers and also better maneuverability in case of an ice break. Ships equipped with this technology and with a normal, sleek bow have a stern that is shaped like an icebreaker bow. When the ice drifts, these ships turn around and break backwards through the ice at full power. This new technology is already used by the Mastera and Tempera ships .

In the past, the ports of the Baltic Sea and the North Sea were often frozen over in winter. Shipping came to a standstill, the ships were laid up , the crews withdrawn. After the industrial revolution, however, the capital deployed in the form of ships had to “work”, and exposure for several months was no longer economically viable under the pressure of the markets and competition. People began to think about how the frozen waterways could be kept open in winter. Initially, attempts were made to keep the fairways and fairways open by purely manual labor, i.e. with saws and small wooden boats with cutting edges (so-called Eisewern ) and finally even with explosives. That was an extremely tedious job that was often undone overnight when a fresh wind had piled up new pack ice. Only after the invention of the steam engine and its introduction in shipping were the first simple but effective icebreakers developed.

The first icebreaker was probably the steam tug City Ice Boat No. 1 from 1837, the first iron pilot which was converted into an icebreaker in Kronstadt in 1864. As early as 1868, the positive experience led to a new building based on the pilot principle : the Boi, which is considerably more powerful with 183 kW . Despite the successes and strong interest in some countries bordering the Baltic Sea, the two ships initially had no direct imitators. In the ice winter of 1869/70, however, the freezing of nine steamers on the Elbe led to the - unsuccessful - attempt to acquire the pilot for Hamburg. It was not until the following and even heavier ice winter that the icebreaker Comité / icebreaker No. 1 , which entered service in December 1871. It was designed by the ship's designer Carl Ferdinand Steinhaus and had a spoon-shaped, curved flat bow with which the ship could push itself onto the ice and then break the ice under its own weight.

One of the first sea-going icebreakers is the icebreaker Yermak, designed according to plans by Admiral Makarov . At the beginning of the 20th century, several countries commissioned ships specially built as icebreakers for the coastal waters.

The oldest surviving machine-driven icebreaker in the world is the Finnish Tarmo , which was built in Newcastle upon Tyne in 1907 and was last used in 1970. It has a drive power of 3,850 hp and a displacement of 2,300 t.

With the construction of the Stettin , the so-called Runeberg-Steven, developed in Finland, came to Germany for the first time .

The first civilian reactor ship in the world was the Soviet icebreaker Lenin , which was commissioned in 1958 (44,000 HP, 19,240 GRT, 3 reactors with 90  MW thermal output ). The Soviet "Arktika" class includes the largest and most powerful nuclear-powered icebreakers in the world, with an output of around 55,000 kW (75,000 PS, 2 reactors, each with 171 MW thermal output). The Rossiya , Arktika , Sibir , Sovetskiy Soyuz and Yamal were built in this performance class in the Soviet Union between 1975 and 1992 . They can break through ice five meters thick. The Arktika was the first surface ship to reach the North Pole in 1977 . Previously this had only been possible with submarines .

The largest icebreaker ever built is the American Manhattan , a tanker converted into an icebreaker . In 1969 she was the first tanker to cross the Northwest Passage .

The German polar research ship Polarstern is also built as an icebreaker and can travel through 1.5 meter thick ice. On September 7, 1991 this ship reached the North Pole as the first conventionally powered ship . In 2019, on the occasion of the 60th anniversary of the nuclear icebreaker fleet , Rosatom organized a special expedition of 50 Let Pobedy to the North Pole, on which school children from Russian nuclear cities were allowed to ride. Shortly afterwards, the Norwegian icebreaker Svalbard reached the North Pole for the first time and a little easier due to the channel of the 50 Let Pobedy .

In order to be able to use cargo ships in arctic regions in medium ice conditions without the assistance of an ice breaker, the first ice-breaking container ships have recently been built. The Russian ship Aker ACS 650 can operate independently in ice up to 1.5 m thick. As a nuclear powered cargo ship, the Sevmorput is also able to break ice up to a thickness of 1 m. 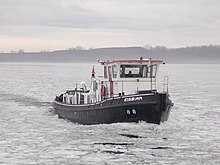 Inland icebreaker on the Havel

Icebreakers are also used in inland shipping to break up rivers and canals for shipping and to break up ice jams in the area of ​​weirs and locks. In Germany, almost all inland icebreakers are operated by the Federal Waterways and Shipping Administration (WSV).

Deutsche Binnenreederei GmbH also has a so-called ice plow, which enables push convoys to be used on frozen canals.