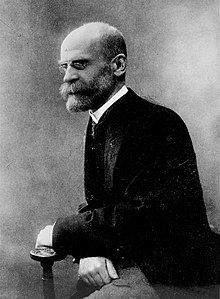 David Émile Durkheim [ eˈmil dyʀˈkɛm ] (born  April 15, 1858 in Épinal , France , †  November 15, 1917 in Paris ) was a French sociologist and ethnologist . In 1887, as a lecturer in sociology and pedagogy in Bordeaux, he was the first to hold an academic position at a French university . Today it is considered a classic in sociology, which with its methodology sought to establish the independence of sociology as a specialist discipline . His empirical study on suicide became the paradigm of empirical sociology .

Émile Durkheim was the son of the rabbi of the Jewish community Épinal ( Lorraine ) Moise Durkheim (1805-1896) and grandson of Abraham Israel Durkheim, born in 1766 in what is now Bad Dürkheim . Durkheim studied at the École normal supérieure in Paris after failing the entrance exam twice. There he met a number of men who were later also very famous, including Lucien Lévy-Bruhl and Jean Jaurès .

After graduating, Durkheim first worked as a teacher of philosophy at high schools. After studying in Germany from 1885 to 1886, he published two articles about his fellowship in Berlin and Leipzig, where he was particularly impressed by Wilhelm Wundt . These writings made him famous and led to his receiving a teaching position for social science in Bordeaux from the head of the higher education department in the Ministry of Education in 1887 , where he became professor of pedagogy and sociology in 1896 - the first lectureship in sociology at a French university.

During his time in Bordeaux Durkheim wrote three of his most important works: On the social division of labor (his dissertation, 1893), The rules of the sociological method (1895) and The suicide (1897). In 1896 he founded the magazine L'Année Sociologique , of which he published twelve volumes and to which the so-called Durkheimians, a group of like-minded people and Durkheim's students made significant contributions.

Durkheim, otherwise rather apolitical, intervened in the Dreyfus affair in 1898 with his article L'Individualisme et les intellectuels . He dealt with the arguments of opponents of a revision of Dreyfus' condemnation and contradicted the claim that the intellectuals would plunge the country into anarchy with their criticism of the military and the state.

In 1902 Durkheim began teaching at the Sorbonne University in Paris , where he was given a chair in educational science in 1906 , which in 1913 was renamed Educational Science and Sociology . On November 8, 1907, at a time of growing political tension with Germany, he wrote an open letter to defend himself against the charge that he had tacitly infiltrated German ideas into his sociology and thus into the Sorbonne. So he distanced himself from Wilhelm Wundt and emphatically confessed to William Robertson Smith . While Robertson Smith's influence on Durkheim was only immanent until then, he later unreservedly followed his theory of sacrifice in his work The Elementary Forms of Religious Life (1912).

Durkheim was hit hard by the death of his promising son André, who fell in the Balkans in 1915/16. When he himself died on November 15, 1917 at the age of 59, he left behind his wife Louise, nee Dreyfus, and his daughter Marie.

In his first dissertation, written in Latin and completed in 1892, Durkheim dealt with Montesquieu and Jean-Jacques Rousseau .

About the social division of labor (1893)

In De la division du travail social (1893) Durkheim outlines a basic model of society based on the following question:

“How does it come about that the individual, although it becomes more and more autonomous, depends more and more on society? How can it be more personal and show solidarity at the same time? Because it is irrefutable that these two movements, however contradicting they appear, run parallel. That is the problem we have faced. It seemed to us that the dissolution of this apparent antinomy is due to a change in social solidarity, which we owe to the ever stronger division of labor. "

According to Durkheim, social structures differ in different forms of solidarity , whereby he divides into two types:

Durkheim understands the principle of “organic solidarity” as a counter-position to utilitarianism , namely that of Herbert Spencer . Such modern collectives are what Durkheim calls "non-segmentary" societies . According to Durkheim, industrial society has a differentiated, highly developed and complex division of labor on such proportions that the individual can no longer oversee it. In fact, the individual in this work-based society is extremely dependent, but he develops an ideology that says exactly the opposite - namely individualism . Durkheim showed this paradox of industrial society for the first time. Other, little or non-industrialized societies are characterized by a much simpler and more manageable division of labor.

The rules of the sociological method (1895)

Durkheim assumes in this work that “social facts are to be treated as things”, i. H. the social state of affairs represents for him the basis of all sociological analysis, and is not merely "incidental" to consider human coexistence, but as a structure with their own merits.

For Durkheim, a social structure cannot be explained by the sum of the ideas of the actors involved and exists independently of those who created it ( emergence phenomenon ). As a “ society ” it acts on people from above and can be uncovered as such by sociology and explained through functional (= effect) and historical (= origin) analysis . According to Durkheim, both aspects must be observed. The modern stratification of society cannot, for example, simply be explained by the fact that professional positions are given different remuneration in order to make them more attractive, because only the effect is considered.

“The set of common religious beliefs and feelings on the average among the members of a given society form a circumscribed system that has its own life; one could call it common or collective consciousness. There is no doubt that it does not find its substrate in a single organ. It is, by definition, spread throughout society. Nevertheless, it has specific characteristics that make it a clearly distinguishable reality. In fact, it is independent of the particular conditions that individuals face. These pass, but it remains. "

According to Durkheim, the collective coercion is not directly observable, but in the negative sanctioning of deviating, i.e. H. irregular behavior detectable and measurable. When this deviation becomes the rule in society, i.e. when the collective conscience is no longer able to maintain order, one speaks of " anomie ". This means that society has passed from a “ normal ” state to a “ pathological ” state.

In the sixth chapter (“Rules of Evidence”) Durkheim defines the method of comparative cultural research as “the only one that corresponds to sociology” (1991, p. 205), cf. Comparison (philosophy) . In the first section (I) Durkheim takes a critical look at Comte and John Stuart Mill. In the second section (II) Durkheim examines four different methods of the comparative method:

According to Durkheim, the first three methods are unsuitable for studying social phenomena because such phenomena are too complex. On the other hand, Durkheim considers the method of parallel variations to be an “excellent instrument of sociological research” (1991, p. 211). In the third and last section (III) Durkheim deals with the comparison of several companies.

In Le suicide , Durkheim examines various hypotheses about the different suicide rates of Catholics and Protestants. For this purpose, he uses empirical data from various sources, especially from moral statistics by Adolph Wagner or Henry Morselli (1852–1929) and examines correlations with different parameters, denominational affiliation, the professional and financial status of those affected, including the weather, the season and the economic situation in the country. He explains the lower suicide rate among Catholics due to greater social control and greater social integration . In the sources, the results were presented with greater reluctance. In addition, the difference between the denominations was only observable in the German-speaking areas of Central Europe and may in turn have been an expression of other factors. Durkheim's results were:

In this context he develops the concept of anomie , which he defines as a situation in which there is confusion about social and / or moral norms because these are unclear or do not exist at all. According to Durkheim, this leads to deviating behavior . In this context, Durkheim names three basic types (ideal types) of suicide: egoistic, anomic and altruistic suicide. Durkheim mentions a fourth type, fatalistic suicide, in only one footnote. Selfish suicide is an expression of a lack of integration into a community, i.e. the result of a weakening of the individual's social ties. As an example, Durkheim cites unmarried people, especially men, who are more likely to commit suicide than married people.

Altruistic suicide, on the other hand, is an expression of too strong a bond with group norms. He finds this particularly in societies in which the needs of the individual are subordinate to the goal of the community.

Anomic suicide reflects the individual's moral confusion, his lack of social orientation, often associated with dramatic social and economic change. It is the result of moral deregulation and a lack of definition of legitimate goals through social ethics that could convey meaning and order to the consciousness of the individual. According to Durkheim, what is missing here is above all an economic development that produces social solidarity. People don't know where their place is in society. In the corresponding moral disorientation, people no longer know the limits of their needs and are in a permanent state of disappointment. This happens above all in the case of drastic changes in the material conditions of existence, economic ruin or even sudden unexpected wealth: Both of these call life expectancies into question and new orientations become necessary before the new situation and its limits can be properly assessed.

Fatalistic suicide is the opposite of the anomic. Here a person is extremely restricted and experiences his future as predetermined, his needs are stifled. This happens in closed and repressive groups, in which people prefer death to continued living under the given and unchangeable conditions. Durkheim gives prison inmates as an example.

The elementary forms of religious life (1912)

Les formes élémentaires de la vie religieuse , published in 1912, deal with the question of the essence of religion . With this work, Durkheim forms the basis for a functionalist view of religion by defining its function as the foundation of social cohesion and identity as its essential core element. Through his intensive research into the totemism of the Australian Arrernte (Aranda) he comes to the conviction that he has found the "primordial religion" of mankind here. This evolutionist theory is now obsolete.

Following Durkheim, individual representatives of the sociology of religion interpret as religion everything that fulfills such functions in different societies. On the other hand, there is a substantive concept of religion that attaches religion to certain content-related features (e.g. ideas of transcendence or the formation of priestly roles).

Well-known students of Durkheim were u. a. Marcel Mauss , Durkheim's nephew, and Maurice Halbwachs . The school to Durkheim and the Année Sociologique are sometimes blamed that researchers did not follow the Durkheim as Gabriel Tarde and Arnold van Gennep , undeservedly forgotten. Even after his death, Durkheim worked on numerous thinkers in France, including the founders of the Collège de Sociologie ( Georges Bataille , Michel Leiris , Roger Caillois ) as well as Claude Lévi-Strauss , Michel Foucault and others from the field of French structuralism . Also Pierre Bourdieu repeatedly attacks back to Durkheim.

Durkheim's legacy was made fruitful for modern sociology primarily through Talcott Parsons , who brought the criticism of utilitarianism to the fore.

In the German-speaking countries, where Durkheim was received less than Max Weber and Karl Marx for a long time , René König (among other things by translating some of Durkheim's works) and Alphons Silbermann (in the mid-1970s in Bordeaux) in particular pointed out Durkheim's importance.

In recent times, Durkheim has been reverted to when it comes to a theory that can explain the change in values in society and the development of moral autonomy of the individual.

Siegwart Lindenberg warned against a hasty categorization of sociological classics such as Weber and Durkheim , as these often work in two ways. Weber's “subjectively meant sense” is not individually understandable, but intersubjectively. And Durkheim, as a methodological collectivist, had programmatically rejected psychological explanations and nevertheless used psychological approaches to explain the processes that create intersubjective meaning.