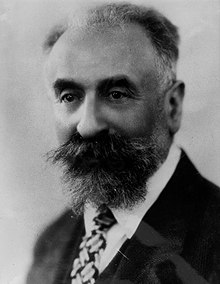 Marcel Mauss came from a Jewish family who ran a small silk embroidery factory in the Vosges . His father was Gerson Mauss, his mother was Rosine Mauss, née Durkheim, who came from a rabbi family. His uncle Émile Durkheim was his mentor for fourteen years . Although influenced by religion, Mauss hardly practiced religion from around 1890, like his uncle.

After attending school at the Épinal Lyceum , he studied from 1890 at the University of Bordeaux , where his uncle Émile Durkheim taught. He was particularly influenced by his pioneering course on Les origines de la Religion 1894/95. In 1895 he received a scholarship at the École Pratique des Hautes Études . In 1876, the year his father died, he met Henri Hubert , with whom he subsequently worked closely.

Mauss taught since 1901 at the École Pratique des Hautes Études in the religious studies department of the "religions of uncivilized peoples" (although he rejected the term "uncivilized"). Together with Durkheim he founded the journal L'Année Sociologique and in 1925, together with Paul Rivet (1876-1958) and Lucien Lévy-Bruhl , the Institut d'Ethnologie in Paris. In 1931 he received the chair of sociology at the Collège de France ; To the annoyance of his uncle, he had turned down his application in 1908. In 1940 he had to vacate the chair because of his Jewish origins.

Politically, Mauss was closely connected to the socialist party Section française de l'Internationale ouvrière , founded the magazines Mouvement Socialiste and L'Humanité and published corresponding reform-socialist articles. His political role model was Jean Jaurès . In 1934 he married his secretary. During the German occupation he was forced out of his position. He himself remained unmolested, but closest colleagues (such as Maurice Halbwachs ) were killed.

After the war he was socially isolated, and there were personal problems.

Unlike Durkheim, Mauss was strongly empirically oriented. He tried to see and understand social phenomena in their totality. The exchange in archaic societies, which he describes in his Essai sur le don (first 1923/24; German under the title "Die Gabe"), is, in his opinion, a comprehensive social activity. It represents a “total social phenomenon” that simultaneously encompasses economic, legal, moral, aesthetic, religious, mythological and socio-morphological dimensions and goes far beyond the human image of the rational Homo oeconomicus and its economy .

At the heart of his exploration of the gift is why one must reciprocate gifts. The answer is based on the fact that in the gift person and things are mixed, one gives a part of oneself when giving and in taking the gift makes an alien experience of the other. Mauss examines this mixture of person and thing not only in foreign cultures, but also in different European legal systems (among the Romans or Teutons) in order to finally transfer from the foreign and ancient cultures to the contemporary societies and there the moral consequences of the practices of the Gift to explore.

The Essai sur le don was the first fundamental comparative ethnographic work on the gift. As a systematic and comparative study, it analyzes the system of gift exchange and interprets its function in the framework of the social order. Mauss emphasizes the moral, psycho-economic principle of the gift in its coercive nature and how guilty it is, and brings the gift together with the ambiguous English gift . This enables him to analyze the principles of work , services , the welfare state and welfare . Mauss coined the term " gift economy " for this

The close cooperation with colleagues was characteristic of the way Mauss worked. One of his students was Jean Rouch . Friends were Robert Hertz , Henri Hubert , Maurice Leenhardt , students were a.o. a. the founders of the Collège de Sociologie , Michel Leiris and Roger Caillois , but also Louis Dumont , André Leroi-Gourhan , Claude Lévi-Strauss and Henri Lévy-Bruhl . His book Die Gabe also had an impact on the thinking of Jacques Derrida , Paul Ricœur , Marcel Hénaff, Maurice Godelier, Marshall Sahlins , Pierre Bourdieu and Jean Baudrillard and is a standard work for anthropologists , sociologists, cultural scientists and ethnologists.

Based on studies on magic and sacrifice, Mauss developed his own theory of religion. So he believed he had found a generally applicable law based on studies of the Eskimos. In the period that followed, however, his religious-theoretical efforts had only a limited aftereffect, especially in Germany they were hardly received. On the one hand, this was due to the fact that the bulk of Mauss' articles appeared in L'Année Sociologique , which were difficult to find in Germany. On the other hand, it was not least due to the death of his best students and friends during and shortly after the First World War. He himself described this as a "collapse". In addition, Rudolf Otto gained an overwhelming influence in German religious studies with his work Das Heilige , published in 1917 . Even against the magic model of James George Frazer , the concept of religion by Mauss could not prevail.