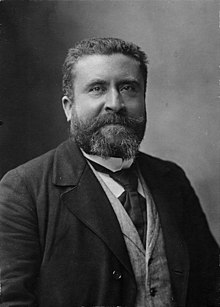 Monument to Jean Jaurès in Carmaux

Jean Jaurès [ ʒɑ̃ ʒɔˈʁɛːs ] (born September 3, 1859 in Castres , Département Tarn , † July 31, 1914 in Paris ) was a French historian and socialist politician and in his home country one of the most famous representatives of reform socialism at the end of the 19th and beginning of the 20th century. He was murdered by a French nationalist on July 31, 1914, just before the start of the First World War .

The son of a middle-class textile merchant embarked on an academic career. He attended the famous Parisian high school Lycée Louis-le-Grand and studied at the Paris elite university École normal supérieure . In various selection processes he was one of the best in his class in the country. After completing his training, he returned to his home region, where he was initially a teacher at the Lycée in Albi and shortly afterwards, in 1883, was appointed lecturer in philosophy at the University of Toulouse .

From 1885 he became involved in politics and was elected for the moderate republican camp at the age of 26 as their youngest member of the National Assembly. After a failed re-election in 1889, he resumed teaching, did his doctorate , worked for the newspaper La Dépêche du Midi , later with the Midi Socialiste and devoted himself to local politics, where he slowly turned more and more to the socialist camp.

An important step was his commitment to the Carmaux miners who went on strike in 1892 and against whom 1,500 soldiers had been mobilized. Under the pressure of the strike and the public created by Jaurès, the government appointed as arbitrator decided the dispute in favor of the workers. The Marquis de Solages , owner of the mine and also a member of the National Assembly, resigned from his political office and Jean Jaurès was elected to the vacated seat in the National Assembly the following year.

From 1893 to 1914, Jaurès was a left-wing Republican member of the National Assembly with a four-year break . He was considered a brilliant speaker with rhetorical skills. Among other things, he called for during the Dreyfus affair , the revision .

Meanwhile, Jaurès was also busy with academic studies, including an analysis of the reasons for the Franco-Prussian War of 1870–1871 , published in 1901, which from a French point of view was remarkably neutral, but now almost unknown (see below, #Werke ) .

In 1902 Jaurès was one of the founders of the French Socialist Party ( Parti socialiste de France , PSDF - not to be confused with the Parti socialiste , PS). Together with the future minister and prime minister Aristide Briand , he founded their party newspaper L'Humanité in 1904 and ran it until his death. She later became the mouthpiece of the PCF .

In 1905 Jaurès became president of the association of socialist groups in the Section française de l'Internationale ouvrière (SFIO), which he, Jules Guesde and Édouard Vaillant had a major influence on . His conception of socialism, which was based on a humanistic basis and aimed to change the social order in a parliamentary-democratic way, brought him into conflict with the revolutionary Marxist wing of the SFIO. The SFIO program was a compromise between various currents and contained both Marxist ideas and a commitment to class struggle as well as reformist goals.

As one of the most prominent advocates of reform socialism on a humanist-pacifist basis, Jaurès campaigned passionately for the cause of pacifism and against the impending war on the eve of the First World War . At peace demonstrations and in parliament he advocated a political understanding with Germany . For this he was hated by the political right. His thinking was shaped by such diverse people as Pierre J. Proudhon , Auguste Blanqui , Karl Marx , Henri de Saint-Simon , Auguste Comte , Immanuel Kant , Johann Gottlieb Fichte , Ferdinand Lassalle , Leo Tolstoy and Pyotr Alexejewitsch Kropotkin .

Immediately before the start of the First World War, Jean Jaurès was murdered on July 31, 1914 in a Paris café in an assassination attempt by the French nationalist Raoul Villain . After the victorious war and a correspondingly long pre-trial detention, the murderer of war opponent Jaurès was acquitted on March 29, 1919 by a Cour d'assises (jury). In addition, the expenses of Jaurès' widow were passed on.

On December 23, 1924 Jaurès' mortal remains under the sympathy of thousands of his original grave site in the national were Hall of Fame Panthéon transferred .

The expressionist author Walter Hasenclever , born in Aachen, wrote two poems on Jaurès: Jaurès Death and Jaurès Resurrection , which were published in 1916 and also received in France.

In memory of Jaurès, of his resolute commitment to peace and of the devastation of World War I, many French municipalities have named streets and squares after him. In 1914, shortly after the outbreak of World War I , the Avenue d'Allemagne in Paris was renamed Avenue Jean Jaurès and the nearby metro station Rue d'Allemagne was renamed Jaurès . In 1980, in the Paris suburb of Boulogne-Billancourt, another station ( Boulogne - Jean Jaurès ) of the Paris Metro was opened that bears his name. Metro stations in Lille and Toulouse also bear his name.

In Berlin , a portion of the district got Waidmannslust the district Reinickendorf lying Cyclopstraße on November 1, 1987 the name of Jean-Jaurès Street. In mid-2014, a corresponding designation was discussed in Neuenburg am Rhein .

In Vienna in 1919 the Jaurèsgasse and a communal residential complex built between 1925 and 1926 were named Jean-Jaurès-Hof .

Jacques Brel dedicated a chanson to him called Jaurès (1977). The French Socialist Party honored him by naming its political foundation “Fondation Jean-Jaurès”.

The German author of Croatian descent Marica Bodrožić dedicates a prose poem to Jean Jaurès with the beginning “LISTEN TO ME, I will tell you the truth, he cried, and the truth was that he wanted to give his life for it.” (Marica Bodrožić: Light organs . Poems, Salzburg-Vienna, Otto Müller 2008, p. 103).