Dining room in the house (now a museum) in Yasnaya Polyana

Lev Tolstoy came from the Russian aristocratic family of the Tolstois . He was the fourth of five children. His father was the Russian Count Nikolai Ilyich Tolstoy (1794–1837), his mother Marija Nikolajewna, née. Princess Volkonskaya (1790-1830). When he was an orphan at the age of nine, his father's sister took over the guardianship. In 1844 he began to study oriental languages at the University of Kazan . After a change to the law school, he interrupted his studies in 1847 off to the location of the 350 inherited serfs in the family estate of the family in Yasnaya Polyana with land reforms to improve (the morning of a landowner). According to other sources, in 1848 he passed the legal candidate exam at the St. Petersburg University “with a narrow need” and then returned to his village.

From 1851 on, he experienced the war in the Caucasus in the tsarist army as an ensign in an artillery brigade . His experiences in military operations influenced his early Caucasus stories (The Logging , The Raid , The Cossacks ) . After the outbreak of the Crimean War , he experienced trench warfare in the besieged Sevastopol fortress in 1854 . The realistic reports from this war (1855: Sevastopol tales ) made him known early on as a writer. 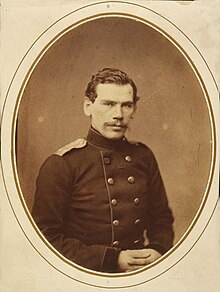 From 1855 he lived alternately on the Yasnaya Polyana estate, in Moscow and in Saint Petersburg . From a pedagogical point of view, he traveled to Western European countries in 1857 and 1860/61 and visited artists ( Charles Dickens , Iwan Sergejewitsch Turgenew ) and educators ( Adolph Diesterweg ). After his return he intensified his educational reform efforts and set up village schools based on the Rousseau model . He wrote to a relative (A. A. Tolstaja) living at the court of the Tsar in St. Petersburg:

“When I enter a school and see this crowd of ragged, dirty, emaciated children with their shining eyes […], I feel uneasy and horror, similar to how I felt several times when I saw drowning people. Great God - how can I just pull them out? Who first, who later? [...] I want education for the people only to save the Pushkins drowning there , [...] Lomonosov . And every school is teeming with them. "

He did not primarily strive for selection, but rather an education adapted to the various child personalities. Even after the school was closed by the tsarist administration, Tolstoy continued to pursue the educational goals. He wrote reading books containing narratives on history, physics, biology, and religion to teach children moral and social values. Generations of Russian children received their primary education up to the 1920s with his school book Alphabet, first published in 1872 . The revised new edition from 1875, with a circulation of 1.5 million copies, has been translated into several languages. He had a great influence on the reform movements of free schools like Summerhill .

In 1862 Tolstoy married the 18-year-old Sofja Andrejewna Behrs of German descent , with whom he had a total of 13 children. In the following years he wrote the monumental novels War and Peace (1862–1869) and Anna Karenina (1873–1878), which established his literary fame. In his diary in the mid-1850s he noted: "There is something I love more than good: fame."

The time of inner upheaval 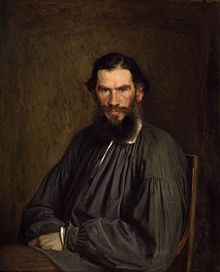 With his great recognition a phase of disorientation began for Tolstoy. He felt “at the edge of the abyss”. As a participant in the 1882 census in Moscow, he perceived a misery among the workers that exceeded that of the peasants. Deeply shaken, he tried to counteract the rural exodus by organizing help for farmers affected by bad harvests.

His search for meaning extended to ever wider areas. He gave up smoking, alcohol and hunting ("cruel amusements"). He followed a vegetarian diet and declared that man had to give up meat food if he wanted to develop morally, “because apart from the excitement of passions resulting from this food, it is also quite simply immoral because it involves an act contrary to the feeling of morality - murder - requires, and because it is only required of gourmet food and gluttony ”. His vegetarianism also has a socially critical component: he found it unbearable "that a lot of effort was put into exquisite, refined dishes in the manor house, while all around there was bitter poverty and periodically repeated hunger". "The poverty of the people and the suffering of the animals are terrible," he wrote in his diary in 1857.

Tolstoy repeatedly and often successfully campaigned for politically and religiously persecuted people, visited prisoners for conscientious objection and remained productive as an author, supported by his wife, who alone is said to have copied the 1650 pages of War and Peace seven times. In the story The Canvas Knife, he mocked the human pursuit of possession from the perspective of a horse:

“There are people who call a piece of land 'mine' and have never seen or set foot on this land. In life, people do not seek to do what they think is good, but rather to call as many things as 'mine'. "

Since 1881 he had devoted himself intensively to religious questions. In a series of conversations with leading clergy like the Metropolitan of Moscow and on trips to various churches and monasteries, he developed an aversion to the ritual form of religiosity that he encountered. He juxtaposed this and the practice of faith practiced in western churches, which affirms military service, with the simple teachings of Jesus. To do this, he again translated the Gospels into Russian. As its core, he emphasized charity and the appeal to resist evil without violence.

The dissemination of his views (church and state , what is a Christian allowed and what not?) Drew opposition from political and ecclesiastical institutions.

The time of external conflict 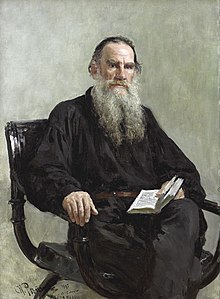 After his respect abroad, he was ostracized at home. Since 1882 he was under police surveillance. My Confession and What My Faith Is In were banned immediately upon publication. It was even rumored that he was mentally deranged . When Tolstoy stressed his responsibility as the author in view of the persecution of his followers, he was answered: “Herr Graf! Your fame is too great for our prisons to house! ”The publication of the novel Resurrection led to the Holy Synod excommunicating him in February 1901 for allegedly -

Tolstoy showed little remorse. “The teaching of the Church is a theoretically contradictory and harmful lie”, it says in a reply to the Synod, “almost everything is a collection of gross superstition and magic.” But this was “not an unconditional denial, there was always a deep belief behind it of God's work in the world and the effort to fathom the true divine law ”(Brockhaus Encyclopedia). 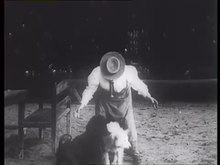 Tolstoy rejected socialist aspirations in the sense of a dictatorship of the proletariat : “So far the capitalists have ruled, then workers functionaries would rule.” With his moral rigor, he saw himself in a conflict: he threw himself and the rich upper class of which he came egocentric and meaningless way of life. His attitude led him to the question of permanent moral values, which he answered for himself with the claim to unconditional charity and radical non-violence . Against this background, Tolstoy was seen in his later years as a representative of a religiously inspired anarchism ; However, he rejected the ideology of Tolstojanism developed by admirers . His work was considered to pave the way for the revolution of 1905 . His friend Vladimir Stasov wrote to him on September 18, 1906: "Hasn't the entire present Russian revolution shot out of your fire-breathing Vesuvius ?"

Shortly before his death, Mahatma Gandhi , who had already referred to Tolstoy in his youth, had sent him his little book Hind Swaraj ("Indian Self-Government"), a pamphlet against British colonialism in which, according to Tolstoy's principles, he lived a virtuous life without Propagating property in opposition to the capitalist principles of growth and economic progress and explaining its Satyagraha doctrine of nonviolent but active resistance. Tolstoy had read the scriptures and encouraged Gandhi in a letter. Together with supporters, Gandhi founded a settlement in Transvaal (South Africa) in 1910 and named it Tolstoy .

In addition to arbitrary state measures such as the house search in 1908, during which all texts that could be found were confiscated, family conflicts also intensified. Since his wife refused to regard the literary works bequeathed to the Russian people in his will as common property of the people, Tolstoy left the family with his doctor and his youngest daughter on one last, spectacular journey south. On this journey in an open train he fell ill with pneumonia and died in the early morning of November 20, 1910 in the house of the station master of Astapovo (since 1918 Lev Tolstoy, today in Lipetsk Oblast), Ivan Osolin - besieged by the world press. Two days later he was buried in Yasnaya Polyana.

After his death, his wife, who had published Tolstoy's works as editor since 1885, published the last complete edition of his works, which she was responsible for. Daughter Alexandra, who was formally appointed by Tolstoy as sole heir of the literary estate, bought the Yasnaya Polyana estate from her mother in 1913. Together with Vladimir Chertkow, she had earned a substantial sum by editing Tolstoy's unpublished writings and selling the rights to a work edition to the publisher Ivan Sytin, thereby fulfilling her father's wish to hand over the lands to the farmers.

When the will became final, Alexandra tried to enforce her property rights to those manuscripts that had been handed over to the archives by the writer's wife with his consent since the late 1880s. Both parties were denied access to the manuscripts pending a decision on this matter. A lengthy dispute in court ensued. This mother-daughter argument was not about copyrights; Tolstaya fully recognized her husband's will. Tolstaja's property rights to the manuscript collection in the archives of the Historical Museum, which were the subject of the dispute, were confirmed by the court and by ukase from the Tsar in 1914 .

The flagship of the Russian inland shipping fleet, the Lev Tolstoy , bears his name.

In 1976 the Mercury crater became Tolstoy and in 1984 the asteroid (2810) Lev Tolstoj was named after him. He is also the namesake for the Dolina L'va Tolstogo valley in Antarctica.

→ Main article : List of the works of Leo Tolstoy

1903: Siberia , the novel Resurrection served as a template

Novellas: The Cossacks  | How much earth does man need?  | The death of Ivan Ilyich  | The Kreutzer Sonata  | The devil  | The fake coupon  | Hajji Murat  | Family happiness

Philosophical Writings: Critique of Dogmatic Religion  | My confession  | What my faith consists of  | The kingdom of heaven within you  | What is art  | Against modern art  | About upbringing and education  | What people live on

Dramas: The Power of Darkness  | The living corpse  | And the light shines in the darkness (unfinished)

Stories and Short Stories: The Raid  | The felling  | Sevastopol cycle  | The snowstorm  | A Landlord's Morning  | Two hussars  | The degraded  | Lucerne  | Albert  | Three deaths  | Polikushka  | An idyll  | The prisoner in the Caucasus  | Yermak and the conquest of Siberia  | God sees the truth, but does not immediately say it  | The bear hunt  | My dogs  | The canvas  knife | The two old  ones | Where there is love, there is God too  | Child wisdom and man's folly  | Don't let the spark become flame  | The candle  | The three old men  | The repentant sinner  | Ivan the Fool  | The egg-sized grain  | The first brandy burner  | Ilyas  | The enemy is tough, but God is strong  | The two brothers and the gold  | The servant Jemeljan and the empty drum  | The baptismal son  | Folk tales  | Russian farmers  | Life  | Cruel amusements  | The dream of the young tsar  | Master and servant  | Father Sergei  | War and Revolution  | For every day  | The great crime  | After the ball  | King Assarhaddon  | Alyosha the Pot  | The Posthumous Notes of Starets Fyodor Kuzmich  | The divine and the human  | Kornej Wasiljew  | Three questions  | Records of a madman  | Power of the child  | The stranger and the farmer  | Songs in the village  | Who are the killers?  | The monk-priest Iliodor  | Thankful ground  | All the same  | Chodynka  | Three days in the country  | For what?  | What I saw in the dream  | Father Vasily