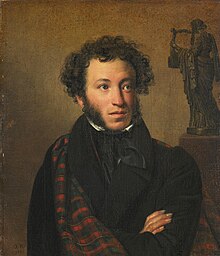 Pushkin's former home on the old Arbat in Moscow. Today it houses a museum

Alexander Pushkin was born in Moscow on May 26, 1799. He was the second of five children of the former Guard Officer Sergei Lwowitsch Pushkin and his wife Nadezhda Osipovna , née Hannibal. On his father's side, he came from an old noble family . On his mother's side, his great-grandfather Abraham Petrowitsch Hannibal , originally an African slave, was given to Tsar Peter the Great, whose godchild was and later rose to major general and governor of Estonia . Pushkin usually spent the summers from 1805 to 1810 with his grandmother, Maria Alexejewna Hannibal, in the village of Sakharov near Zvenigorod near Moscow.

14-year-old Pushkin reads a poem to Derschawin in the Lyceum.

Pushkin spent six years in the Tsarskoye Selo Lyceum (which bears his name today), an elite educational institution that opened on October 19, 1811. From there the boy also experienced the events of the Patriotic War against Napoleon (1812). In the ranking of the best boarding school students, Pushkin was the 27th of 30 selected by the minister of education.

Pushkin's first attempts at poetry were made in the Lyceum. B. in the poems Mönch ( Монах , 1813), Bowa ( Бова , 1814), Message to Judin ( Послание к Юдину , 1815) and Dream ( Сон , 1816). In early 1815, in the presence of GR Derzhavin , Pushkin read his patriotic poem Memories of Tsarskoe Selo (Воспоминание о Царском Селе), which was printed in the Russian Museum magazine (Русский Музей). In 1816 Pushkin's poetry took a decisive turn when the elegy became his main form of poetry.

While still at school, Pushkin was accepted into the Petersburg literary society Arsamas of WA Zhukovsky , which opposed the traditional, encrusted linguistic concepts of the established literature and advocated the further development of the Russian standard / written language. The poet's early poetry exudes his insatiable lust for life.

In 1817, Pushkin graduated from the Lyceum at the age of 17. He then accepted a position in the Petersburg College of Foreign Affairs with the title of College Secretary . He became a regular theatergoer, took part in the meetings of the Arsamas Society and became a member of the literary and theater community Green Lamp (Зелёная лампа), which was influenced by the beginnings of the Decembrist movement. Although Pushkin did not take part in the early, secret work of the Decembrists, he was still friends with many of the active members and wrote political epigrams and poems such as К Чаадаеву ( love, hope, silent glory ... ), Вольность , Н. Я. Плюсковой (all 1818), Деревня (1819). During these years he was busy writing the fairy-tale verse epic Ruslan and Lyudmila ( Руслан и Людмила ), which he had already started in the Lyceum and with which he was completely in line with Arsamas regarding the need to create national heroic epics. The poem was completed in May 1820 and received a strong and conflicting response from the criticism. Zhukovsky sent Pushkin a dedication: "To the victorious pupil from the defeated teacher". Critics revolted over the decline of the High Canon . The parodic union of the legendary and the historical, the comic and the heroic overcame the form of the classicistic epic.

In the spring of 1820 Pushkin had to answer for a few mocking poems in which he had ridiculed public figures such as the Minister of War and the Minister of Education. He escaped exile to Siberia through the protection of influential friends. Petersburg, however, he had to leave in connection with a transfer to General Insow in Yekaterinoslav in early summer. He fell ill in his new job and joined his Petersburg friend, General Rajewski , who was on his way to the Caucasian baths and found him with a fever. From August to September Pushkin traveled to Odessa via the Crimea. He lived with Rajewski for some time and got to know his daughter Maria . The romantic poem The Well by Bakhchisarai was written. In 1820 Pushkin also became a member of the Filiki Eteria . Until 1824 he lived in different places in southern Russia, u. a. in Odessa , Kishinev and Kamjanka . In 1823 he began his most important work, the verse epic Eugene Onegin , which he only completed in 1830.

In 1824, Pushkin was dismissed from the civil service after writing a letter of benevolence about atheism . He was exiled to his parents' estate in Mikhailovskoye, where he lived under the constant supervision of the authorities for the next few years. Pushkin maintained an intensive literary correspondence with his friends, he worked on a volume of poetry that appeared at the end of the year, and ended the tragedy of Boris Godunov , with which he went far off the beaten track of Russian poetry.

After an audience with Tsar Nicholas I , Pushkin was allowed to live in Moscow and Petersburg again from 1826 to 1831, but his works were personally censored by the Tsar and his work and way of life were strictly controlled (also due to his connections to the activists of the Decembrist uprising ). This also shaped the further work on Eugene Onegin . Pushkin was dissatisfied because he could neither realize his poetic nor his private ideas.

His marriage to Natalja Goncharova in 1831 brought about a change in Pushkin's circumstances . They met in 1830. With a view to the wedding, Pushkin received the village of Boldino from his father, 250 km from Nizhny Novgorod . Pushkin only wanted to visit it briefly, but a cholera epidemic prevented the return to Moscow. Pushkin was forced to stay in the province and it became his greatest creative period. The couple had a total of four children, daughter Maria (1832-1919) was born in 1832, son Alexander (1833-1914) in the following year, two years later the second son Grigori (1835-1905) and the last child was daughter Natalja ( 1836-1913). The latter married the Russian general Michail Leontiewitsch von Dubelt (1822-1900) and after divorce from Dubelt in 1868 Prince Nikolaus Wilhelm zu Nassau .

The couple moved to Petersburg in 1831, where, with the support of Goncharova's affluent relatives, they were able to participate in the glamorous life of the Tsar's court - which frustrated Pushkin, who yearned for independence. He argued frequently, and often for trivial reasons; his works during this time were created under great psychological pressure. He frequented the S. Wolf and T. Beranger cafés in St. Petersburg .

It was not until 1836 that he was allowed to publish the literary magazine Sowremennik (Der Zeitgenosse) , a step forward in his work, which was severely affected by censorship. 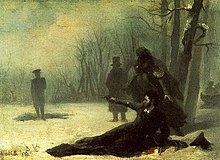 Pushkin and his wife Natalja made the acquaintance of Georges-Charles de Heeckeren d'Anthès in Saint Petersburg . He married Natalja's sister Katharina Goncharova, but nevertheless courted Natalja Pushkina in a striking and provocative manner. Because of his obtrusive devotion to Pushkin's wife, rumors arose that cast doubt on her marital fidelity. Pushkin wrote an insulting letter to the adoptive father Heeckeren, whereupon d'Anthès challenged his brother-in-law Pushkin to a duel , which took place on January 27th . / February 8, 1837 greg. was carried out. Pushkin was seriously injured by a shot in the stomach and died two days later from his gunshot wound. D'Anthès was only slightly injured in the arm and chest. For fear of condolences, Pushkin was transferred to the Svyatogorsky Monastery in today's Pushkinskije Gory near Pskov and buried there.

Most of his compatriots consider Pushkin to be the Russian national poet - by a long way ahead of writers who are well known abroad, such as Tolstoy , Dostoyevsky , Gogol or Pasternak .

Until Napoleon's invasion of Moscow in 1812, the Russian upper class spoke French. After the subsequent fire in Moscow, people wondered why they were actually speaking the language of the enemy. Pushkin paved the way for the use of colloquial language in his poems, dramas and stories; he created a narrative style that blended drama , romance, and satire - a style that has since become inextricably linked with Russian literature and has massively influenced numerous Russian poets. His romantic contemporaries were Byron and Goethe ; he was influenced by Voltaire and Shakespeare's tragedies .

The Alexander Sergeyevich Pushkin Prize and the Pushkin Medal were named in his honor. In Russia there are numerous names after Pushkin, including the former Tsarskoye Selo (since 1918 Pushkin ) and the Pushkin Museum . 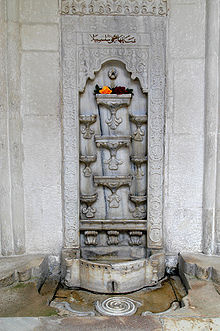 The Well of Tears in Bakhchysarai Khan's Palace