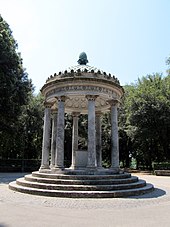 Villa Borghese is the name of a park in Rome . It emerged from the estate of the noble Borghese family . The most famous attraction is the Galleria Borghese, which is located in the Casino nobile. 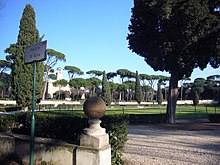 Four entrances lead to the area: on Via Pinciana, Piazza H. Sienkiewicz , Piazzale Brasile and Piazzale Flaminio. Access to the casino, which houses the art collection of the Borghese Gallery, is at 5 Piazzale Scipione Borghese .

The villa with its extensive park (approx. 5 km²) was the summer residence of the Borghese dynasty . The site was acquired in 1605 by Cardinal Scipione Borghese , nephew of Pope Paul V , allegedly also with the confiscated property of the Cenci family .

Originally, the area included vineyards, gardens, stables and coach houses as well as a zoo with rare animals and plants, an aviary and water features. In the 17th century it was already famous for its treasures of ancient art. The casino was built between 1613 and 1616 under the direction of the architects Giovanni Vasanzio and Flaminio Ponzio .

In the years 1898/1899 it served as accommodation for the Pontifical Portuguese College .

The villa has been in state ownership since 1901.

Every year in May, the international show jumping tournament CSIO Rome is held on the Piazza di Siena . 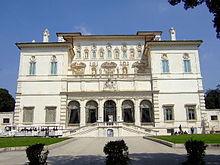 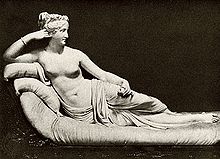 The gallery, one of the most famous and valuable private art collections in the world, goes back to the collecting activities of Cardinal Scipione Borghese, who was also the builder of the casino in which the collection is housed. Little remains of the building's first interior decoration and painting, including the frescoes by Claude Deruet in the cardinal's private chapel. The casino originally only housed the cardinal's collection of antiques and sculptures, while the majority of the paintings were hung in the city palace of the Borghese in Rome. In 1682 part of Olimpia Aldobrandini's legacy , including pictures from the Lucrezia d'Este collections, came to the museum.

The collection was almost completely preserved until the 19th century, apart from a few losses, and valuable additions were also made. Serious losses occurred in the course of the marriage between Camillo Borghese and Pauline Bonaparte , Napoleon's sister . Under Napoleon's pressure, the Duke had to sell a number of works of art, some of which are now among the highlights of the Louvre . The gallery lost a total of 154 statues, 160 busts, 170 reliefs, 30 columns and several vases to France. In 1827 Camillo Borghese acquired Correggio's Danae in Paris .

At the beginning of the 19th century, the archaeological inventory was expanded to include findings from excavations carried out on the family's estates at the instigation of Marcantonio Borghese. The so-called statue casino was set up, which contains a rich collection, some of which are important antiquities, including the seated statue of Anacreon , a Bacchus , a Juno Pronuba, a Tireos statue , a seated Pluto and the statue of a dancing Silenus.

Competition venues for the 1960 Summer Olympics