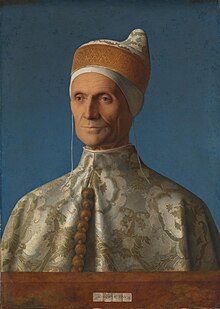 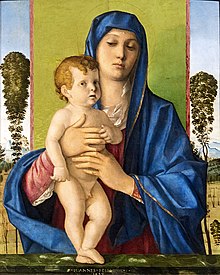 Giovanni Bellini (* around 1437 in Venice ; † November 29, 1516 ibid), also Giambellino , in German-speaking countries sometimes also called Gian Bellin , was a Venetian painter. Together with his brother Gentile he founded the Venetian painting school of the early Renaissance .

Giovanni Bellini came from a Venetian family of painters. He was the illegitimate son of Jacopo Bellini , his brother was Gentile Bellini .

His early work was influenced by the painting of his brother-in-law Andrea Mantegna , who was married to his sister Nicolosia. Through him the brothers Gentile and Giovanni Bellini got to know the school of Francesco Squarcione , especially during work stays in Padua . They were also influenced by Donatello's work, which they also got to know in Padua.

In order to meet the strong demand for his pictures, Bellini used his large workshop to repeatedly produce picture solutions that had already been found. He received commissions from Isabella d'Este and Francesco Gonzaga . Giorgione , Tizian and many other famous artists also emerged from his workshop .

After numerous public commissions, he was appointed official painter of the Republic of Venice in 1483 in order to be able to devote himself to painting the Sala del Maggior Consiglio in the Doge's Palace .

Devotional images such as the Madonna and Child take up a large part of Bellini's work . Greek and Byzantine icons , which were widespread in Venice and whose stereotypes he changed, served as models for his pictures of the Madonna . These images exude a strong emotional, poetic relationship between mother and child. The Pietà and the Sacra Conversazione form another focus of the devotional images.

Alongside his father Jacopo and his brother Gentile, Bellini was influential in the development of the portrait in Venetian painting. He was influenced by Antonello da Messina since his stay in Venice from 1474 to 1476. Bellini maintained the aloofness of the early Venetian portrait, but the sitters were now mainly depicted in three-quarter profile. The depiction of the landscape in the background is also famous, the greenish-gold color of which became an essential feature of Venetian painting. The painterly softness took the place of the graphic hardness of the early Renaissance, especially in the late work, and the colors received warmth and luminosity thanks to the adoption of the oil colors of Dutch painting, which Antonello da Messina introduced in Venice.

One of his main works is the triptych Madonna Enthroned with the Four Evangelists (1488) in the sacristy of the Church of Santa Maria Gloriosa dei Frari in Venice. This work inspired Albrecht Dürer , who described Bellini as the best painter in a letter, for his painting The Four Apostles .

Many of his pictures burned in 1577 in a great fire in the Doge's Palace . In 1993 a portrait of the Madonna and Child (1480) was stolen from the Cappella Valier of the Madonna dell'Orto church in Cannaregio and has not been found to this day.