This article explains a representation in the fine arts. For further meanings see Pieta .

Our Lady of Sorrows in the Ursuline Monastery in Erfurt 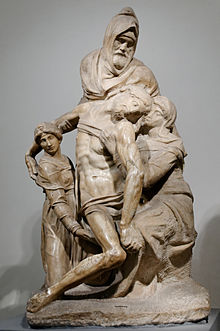 The Pietà ( Italian for "piety, pity", from Latin domina nostra de pietate "our mistress of pity"), also called Vesper picture , is the representation of Mary as Mater Dolorosa (mother of sorrows) with the body of the dated in the visual arts Jesus Christ taken down from the cross . In contrast to the lamentation of Christ , the body of Jesus always lies in Mary's lap.

The motif of the Pietà has been in use in sculpture since the early 14th century and older research associates it with the creation of the devotional image . The origin of the history of piety can be seen in the increased focus on the suffering of Christ on the cross and the compassion of his mother for her son. The formal origin of the Vespers in multi-figure depictions of lamentation is repeatedly asserted, but has not been proven. The Pietà is one of the most famous iconographic representations of the Middle Ages .

Vespers can be found in most Catholic churches. A Liturgy of the Hours dedicated to the Passion has been known since the 4th century. The scene forms the penultimate station of the stations of the cross ; it is the main content of the prayer in memory of Mary's sorrows . The name Vesperbild is based on the idea that after the Descent from the Cross, Mary received the body of her son on Good Friday around the time of the evening prayer, Vespers .

The earliest surviving representations of a Pietà date back to the first decades of the 14th century. They come from the area between Naumburg ( Naumburg Cathedral , around 1330), Erfurt ( Ursuline Monastery , around 1340) and Coburg ( Museum on the Coburg Fortress , around 1320) and from the Lake Constance area ( Radolfzell , today Freiburg Augustinian Museum , around 1330). The wooden sculpture of a "joyful Vesper picture", which was created around 1300, is privately owned in Switzerland. The dating of the so-called Pietà Roettgen ( Rheinisches Landesmuseum Bonn ), which may also be one of the earliest Vespers pictures, is still controversial. Maybe there was a somewhat older Pietà in the church of the Carmelites to Cologne (after Gelenius in a drain to 1298 mentioned).

Among the most famous works of this subject are Michelangelo's Pietà in St. Peter's Basilica ( Cappella della Pietà ) made of marble , his unfinished Pietà Rondanini in Milan and the Florentine Pietà of Palestrina, which was also previously attributed to Michelangelo . The Pietà is also a focal point in the work of Giovanni Bellini . A copy of Michelangelo's Pietà is in the Saint Hedwig's Cathedral in Berlin .

There are three depictions of a leather Pietà in the main parish church of St. Peter and Paul in Eschweiler in the Rhineland and in the pilgrimage church in Dieburg in Hesse .

A Pietà in the Holy Cross Chapel at the Blieskastel pilgrimage monastery (“ Our Lady with the Arrows ”) is unique . In this Vesper picture from the 14th century there are five iron , medieval arrowheads . According to legend, the arrows were shot in by wicked people . An example of rural folk art is the Dieffler Pietà .

A Pietà with the body of Jesus lying at the feet of Our Lady of Sorrows is in the Friedenskirche in Linz . It was created in 1923 by Adolf Wagner von der Mühl .