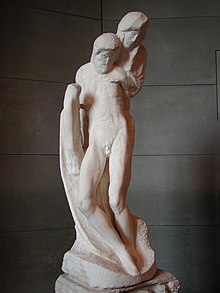 The Pietà Rondanini (1552 to 1564) is a marble statue showing Mary and Jesus taken from the cross in an upright position. It is Michelangelo's last work and also his last Pietà. Like so many works by the Florentine, this one too remained unfinished. The statue is now in the Castello Sforzesco in Milan.

Like the statue of the Descent from the Cross, the Pietà Rondanini was intended for Michelangelo's own tomb. In contrast to the Roman Pietà and most of the other better-known works by Michelangelo, it was not a commissioned work. Michelangelo had apparently had the idea of ​​making a Pietà for his tomb for a long time. He began working on a group known as Pietà Bandini around 1550 , but was unable to complete it due to imperfections in the marble.

Michelangelo then began around the years 1552–1553 to work on a block of marble from which the Pietà Rondanini, known today, was to emerge. However, the original version was abandoned by the artist. A marble head found during excavation work in the Church of Santa Maria in Trastevere in the 1950s and exhibited in the Galleria Borghese in Rome was initially interpreted as the head of Jesus in the original version of the statue, but this thesis had to be discarded due to petrochemical testing.

The development of sculpture since its creation is by no means as completely clear as it is in other works by Michelangelo. In 1652 the statue is attested in a shop in Rome. In 1744 it was acquired by the Rondanini family, which gave it its name. In 1807 the work is mentioned in an inventory of the Marchese Giuseppe Rondanini, known as an art collector, whose initials (MGR) can also be seen at the base of the sculpture. The description of the marble group in the inventory expresses uncertainty about the origin, only the assumption is expressed that the work could be by Michelangelo. The statue remains in the courtyard of the Palazzo Rondanini (Sanseverino) in Rome on Via del Corso until 1920. In 1952 the Sanseverino family, who owned Palazzo Rondini until the mid-1940s, sold the group to the city of Milan. Since then, the work has been located there in the Castello Sforzesco and is open to the public.

The 195 cm high group is made of white marble. The surface is, apart from the legs of the Jesus figure, not smoothed, rough chisel marks are clearly visible. From the first, abandoned conception, a right arm remains, which is cut off above the elbow. The size of the arm suggests that the original group was planned to be significantly larger than the work that came upon us.

With the Pietà Rondanini, Michelangelo left the original concept of the Vesper image and the “Italian” Pietà, as it was still realized in his Roman Pietà , far behind. Instead of showing Jesus, taken from the cross, on the lap or in the arms of Our Lady, both figures are shown in an upright position. This radically different composition triggers completely different feelings and associations in the viewer than in conventional depictions of the Mater Dolorosa with the dead Jesus. Nagel speaks of an alternative Christocentric representation of the topos : “While in the classic Pietà Maria or the mother's mourning for her dead son is in the foreground and Jesus is depicted as a“ passive ”to be mourned - often enough in the representation again for The role of Jesus in the Pietà Rondanini is much more active when children are reduced in size. This is not only expressed in the frontal positioning, but also in the fact that Jesus seems to be supporting his trusting mother with his back. The Pietà Rondanini thus completes a line of development from the Roman Pietà to an increasingly active role of Jesus, whereby the Madonna of Bruges, who holds a forward-looking baby Jesus between her legs, marks an intermediate step. "

With the Pietà Rondanini, Michelangelo has strayed infinitely from the concept of idealized beauty, which is perfectly expressed in the Roman Pietà. The individualization of art - the subjectivism, which was first hinted at in earlier works by Michelangelo, such as the Roman Pietà, is completed with the Pietà Rondanini. Wilhelm Lübke speaks of “ingenious arbitrariness [and] unbridled subjectivism” and sees it as a fatality for the further development of European art, which “became all the more dangerous, the less inner greatness lay in the imitators, and the more this deficiency due to exaggerated Michelangelesque Forms should be covered in a bad manner. "

The group is exemplary of the problem of the non-finito in Michelangelo, which has been judged very differently over time and depending on the commentator. Ultimately, every interpretation is possible, from a mere failure to an exact correspondence of the artist's intention - although the latter is hardly likely because of his death in the middle of the creative process.

Burckhardt advised against viewing the plant and made a devastating verdict: “After the block was already so spoiled as you can see it, how could he [Michelangelo] still want to force these figures out at the expense of those physical proportions that nobody better knew as he? Unfortunately every chisel strike is probably from him. "

Herbert von Eine , however, sees “plastic form at the limit of what can still be designed. Nature's own form, which for Michelangelo used to be inviolable, no longer applies. The form has a transparency of the spiritual that seems to elude perfection. ”Thus the unfinished, the non-finito, becomes an infinito, a struggle with infinity itself that is ultimately doomed to failure.