The title of this article is ambiguous. For the castle of the same name in Vigevano see Castello Sforzesco (Vigevano) .

Inner courtyard of the Castello Sforzesco

Castello Sforzesco is a castle in Milan . It is in Piazza Castello in the northwest of the old town. 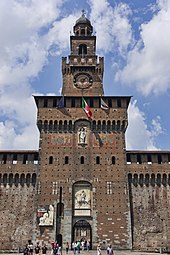 The Torre Filarete with the entrance gate to the Castello

The mighty castle , crowned with battlements, was built from 1450 by Francesco I. Sforza on the site of the Visconti family's castle, which was built between 1360–1370 and destroyed in 1447 . Numerous architects have worked and rebuilt the complex, including Guiniforte Solari , Leonardo da Vinci , Filarete , Bramante and Cesare Cesariano . A bastion system that surrounded the castle since the Spanish domination in the 17th and 18th centuries, made from 1800 Napoleon grind , it was later partly built over and partly redesigned park-like (see Parco Sempione ). Here are u. a. an arena, an observation tower and the neoclassical triumphal arch Arco della Pace (Peace Gate) from the years 1807–1838.

In the years 1893–1905, the facility, threatened by demolition, was extensively restored by Luca Beltrami . The war damage caused by the bombing in 1943 could also be repaired.

The location of the fort in the course of the medieval as well as the Baroque expansion of the Milan city fortifications favored the strategic situation not only for the defense against external enemies, but also against inner-city revolts. With its square floor plan, the complex, like other medieval valley castles on the Po Valley, also follows the scheme of the Roman castrum . The south-eastern front faces the city ​​center, its central tower, built by Filarete in 1485 , destroyed in a powder explosion in 1521 and reconstructed around 1900, is exactly in the line of sight of Via Dante and covers the main entrance to the inner courtyard. Round corner towers with rusticated ashlar flank the approx. 20 m high, sloping brick wall, which was once a moat in front of it.

Half of the inner area is shared by the Piazza d'Armi , a parade ground for the Sforza soldiers barracked around it, and the Rocchetta wings, which are in turn grouped around courtyards, in the west and the Corte Ducale , the ducal residence in the north. Various bridges lead over the trenches, for example a covered walkway from the north corner tower, which is attributed to Bramante.

The castle now houses various municipal collections. The Corte Ducale is home to the Museo d'Arte Antica , it mainly contains sculptures from antiquity to the Renaissance. The exhibits include the mausoleum with an equestrian statue of Bernabò Visconti by Bonino da Campione (1363) and the tomb of Gaston de Foix (Nemours) (1512). The wooden sculptures and a furniture collection that extends to the present day are shown in common rooms. The tour also leads through the Sala delle Asse with Leonardo's ceiling frescoes and through a collection of weapons. The Corte Ducale also houses the Egyptian collection of the Archaeological Museum and the Pinacoteca , a gallery of Italian paintings from the 15th to 18th centuries. Andrea Mantegna , Antonello da Messina , Giovanni Bellini , Filippo Lippi , Antonio da Correggio , Tizian and Tintoretto are represented here.

The Museo delle arte decorative shows the history of handicrafts in the Rocchetta ; the collection of musical instruments is also housed here. The Pietà Rondanini from the years 1553–1564, the last, unfinished sculpture by Michelangelo, has recently been reserved for a museum hall with its own entrance on the southwest side of the large court of honor. The Raccolta della Stampe Achille Bertarelli , a huge collection on the history of printmaking, donated by Achille Bertarelli , only shows special exhibitions from its holdings in the wing west of the Filarete Tower, with a changing thematic selection.